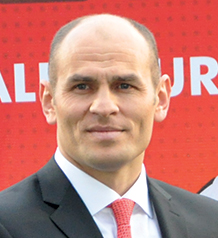 Eye of The Tiger

Fariz Najafov has been the Vice-President of Gabala Sport Club since 2008. He was educated at Azerbaijan Architecture and Construction University, majoring in Engineering. He studied for his Master’s at the Law Faculty of Baku State University. He is a professional sportsman, having been the Shotokan Karate World Champion seven times, and the Shotokan Karate Europe Champion eight times. He worked in Baku as the Head of Customs Administration from 2002. He also holds the rank of Lieutenant Colonel.

Share on:
TBY talks to Fariz Najafov, Vice-President of Gabala Sports Club, on future policies in sports, expanding the club, and the European Games.

What are the prospects for the athletes at the Gabala Sports Club in the coming years?

The club was created in line with President HE Ilham Aliyev’s 2005-15 policy to promote the development of football in Azerbaijan. Gabala Football Club started in 2005, although back then it was called Gilan because it was, and still is, owned by Gilan Holding. In 2013, the club became Gabala Sports Club, embracing different sports besides just football, and took on martial arts such as judo, boxing, karate, and taekwondo, as well as shooting, and most recently wrestling. There is a demand for different types of sports from young people around Azerbaijan. Our aim has been to create a financially strong and well-rooted club, and one that can contribute to both club and national teams in all sports that our teams engages in. We now have facilities and fields throughout Gabala and Baku. Although we have not had much success in the European arena, considering we have been around a long time, we have managed in this 10-year period to create a truly impressive foundation. There is a youth football academy and a total of nine football fields, with both grass and artificial surfaces, along with excellent facilities. We have been investing in the future and have set ourselves long-term goals, rather than trying to go for immediate successes and achievements. We are focusing especially on children and youth, so that we can create Azerbaijani, European, and even world champions for the future.

Are you planning on adding any new sports to your club?

We aim to open more schools and facilities throughout the region, and we want to provide facilities for those who do not have access to the kinds of facilities that can often only be found in Baku or the other large cities. We aim to find, train, educate, and develop those who have the right build and potential to be talented players, wrestlers, boxers, and martial artists of the future. For example, we found two or three very talented youths who have gone on to become formidable boxers, as well as freestyle and judo wrestlers.

What can you tell us about the club’s partnership with Pepsi?

After our sponsorship agreement with Hyundai, we entered a new partnership with Pepsi, who have proven to be a great partner for us, contributing significant financial support for our club and also for major tournaments and competitions that have been held in Gabala. For example, we have the annual Gabala Cup, an under-15 football tournament that is sponsored by Pepsi. The Gabala Cup features youth teams from some of the world’s top clubs, including the under-15 youth squads from Barcelona, Porto, Feyenoord, and also Turkish giants Galatasaray, Fenerbahçe, and Beï¬‚iktaï¬‚, along with top Russian clubs like Zenit St. Petersburg and Lokomotiv Moscow; it is an eight-club tournament that always features two Azerbaijani clubs and six other international clubs. Pepsi has helped bring this about, and without them—and of course Gilan Holding, who make these sponsorships possible—tournaments like this would not happen.

What is the importance of Azerbaijan’s hosting the European Games, in terms of the development of sports in Azerbaijan?

This is a major opportunity for Azerbaijan, and its importance cannot be underestimated. Azerbaijan already has considerable experience hosting major international events and organizations, be it the Eurovision Song Contest, or the European and world championships in various sports. Our country can, and will, host major events on a regular basis, and the European Games in Azerbaijan is yet another example of that. I believe it will be of great benefit to the development of Azerbaijani sports, and will be a great inspiration for our sportsmen and women, who will get to see firsthand some of the best athletes in Europe, and indeed the world. We hope that our club will continue to contribute to these events, to Azerbaijan’s overall sporting development and success, and that our athletes will bring European and World trophies home to Azerbaijan.