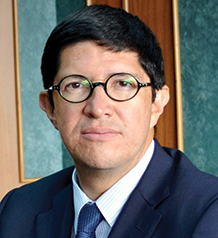 Diego Aulestia Valencia was appointed as Minister of International Trade in February 2015. This portfolio of State, formed a year ago, is the governing body of the policy of International Trade and Investment. He graduated from the Catholic University of Ecuador, holds three Master’s degrees: in Economics, in Latin American Studies with a major in Economic History, and a third in History. He also has a diploma in Urban Studies. Minister Aulestia stands out for his wide-ranging career in the public sector and academic. Previously he served as Minister of Housing and Urban Development. In addition, he was Ambassador of Ecuador to Portugal and Regional Coordinator of Trade to Europe, Chairman to State Bank, General Secretary of the National Microfinance System, and Sub Secretary of Public Policy at the Ministry Coordinator of Social Development.

Share on:
TBY talks to Diego Aulestia Valencia, Minister of International Trade, on the importance of trade agreements, safeguard tariffs, and investment flows.

How would you assess the importance of the trade agreement with the EU for Ecuador’s economy?

Negotiating the agreement became a smooth affair once a common consensus had been reached; yet there are always processes that require implementation to fully appraise its final form. The EU in 2015 extended the commercial preferences for Ecuador to access to the EU market. This is highly important and we believe that the advantages of such an agreement benefit both Ecuadorian and EU companies. Europe is substantial market and we see the agreement as the stability and long-term vision that Ecuador’s productive sector requires in order to grow and develop closer ties with the EU.

How does this agreement fit into the objectives of the Ministry to generate an inclusive development model?

Europe is a highly important market for fair trade and organic products, a niche in which Ecuador already plays an important role, but has much more yet to offer. At the same time, I believe that Europe can provide an answer to the intangible value of our products.

What has been the impact of the government’s decision to implement a safeguard tariff on imports of 2,800 products for a period of 15 months to protect the balance of payments?

This measure has the objective of influencing the kinds of products Ecuador imports. This technical action was developed in accordance to the framework provided by the World Trade Organization (WTO), whom we expect to fully validate it shortly. This is a temporal decision aimed at taking action in a context in which Ecuador has the inability to make a correction of the value of its national currency. We, in this case, need to take similar action to that of devaluing ones own currency. I think this measure has a rather low impact on the productive apparatus of the country and the main raw materials we import.

What actions does the Ministry take to boost exports?

Non-traditional exports have increased over the past seven years at an average annual rate of 14%. This has resulted from several incentives and efforts from the public authorities that include wider financial tools, tax incentives, and export support, among others. Our efforts have run in parallel to those of Pro Ecuador and its extensive network of offices across the world.

Commerce, at $48 million, was the economic sector in which investment flow expanded the most in 2014. How does the Ministry work to further increase investment flow in Ecuador?

Traditionally, Ecuador has not been a destination for FDI. However, we have increased the benefits available and attractiveness of the country through tax and other incentives. We have also worked to increase the competitiveness of Ecuador’s economy by such measures as eliminating bureaucratic barriers in order to establish companies and setting preferential credit lines. All of these actions fit within the country’s legal framework.

What are the main objectives the Ministry has lined up in terms of trade and other such agreements for 2015?

1H2015 threw highly interesting figures into the mix; we are one of the very few regional countries in which non-oil exports have not decreased. This is vital when taking into account the complex international situation. In 2015, we will strengthen efforts and actions to diversify products, services and markets. We will also ramp up our efforts to better articulate commercial and public policies. And meanwhile, we expect to maintain the level of exports observed in 2014, which would be a significant achievement. Overall, I think that the economic situation of Ecuador will improve; currency savings will increase as we decrease oil derivative imports, for example, to generate electrical energy. I think exports of non-oil products will considerably increase in the near future thanks to commercial agreements as well as the revocation of other types of barriers at the local level.