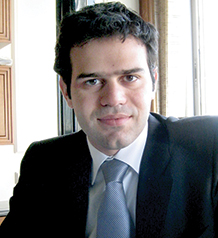 Ramy Torbey is a founder of Eptalex and the managing partner of the Beirut Eptalex office of Aziz Torbey Law Firm. He is a banking and financial markets expert, with substantial M&A, corporate and international taxation experience. Torbey’s practice encompasses a broad array of corporate tax issues, structured finance transactions, joint ventures and cross border transactions; his transactional experience includes high-profile acquisitions and reorganizations of several different industries in the Middle East and in Europe. He has also been advising banks and financial institutions on their day-to-day regulatory and compliance matters and on acquisition and use of the most recent plastic card and mobile payment technology.

The Lebanese parliament recently approved financial legislation in compliance with global financial standards. How will these laws enhance the regulatory framework for the banking sector?

Before the approval of the recent international financial compliance laws, Lebanon was facing the danger of significant sanctions and being blacklisted, which threatened to paralyze the banking sector. These financial compliance laws covering trans-border cash movements, cooperation to fight tax evasion, and measures intended to cut off resources used for terrorism, proved Lebanon’s commitment to standards set by the international financial system. The banking sector is considered a pillar of Lebanon’s economy and, thus, compliance is a major issue and its implementation is essential to the survival of the sector. By complying with these extraterritorial regulations, Lebanese banks are protecting the country’s interests, and securing the continuous work of local financial institutions with the global financial system. Still, it is important to stress that abiding by these laws does not eliminate banking secrecy, it just increases the exceptions as these laws partially lift the secrecy and allow authority to get information about account holders suspected of money laundering or terrorism.

How would you assess the regulatory framework for the potential oil and gas sector, and what incentives is the country offering for future tenders?

With the anticipation of oil and gas exploration, the Lebanese parliament enacted new oil and gas laws to establish an effective regulatory framework that includes various regulatory bodies. The Law on Petroleum Resources at Sea (Law No. 132/2010) presented many advantages to potential foreign and local entities wishing to participate in the exploration and the production of oil and gas. This law enacts the government to grant local entities a 10-year exploration period, in addition to a 30-year production period during which the government is granted an amount equal to 4% of the gas produced and 5-12% of the oil produced. In addition, the government and the exploring entity divide the revenues per their agreement. The conditions set by this regulatory framework are quite encouraging for any potential participants and will certainly have a positive impact in the future development of the sector. Furthermore, the Lebanese government is relying on arbitration clauses, that ensure foreign entities a fair trial should a conflict arise. On the other hand, the Law on Petroleum Resources at Sea has faced many obstacles in the implementation phase. The first problem was the inexistence of a defined exclusive economic zone (EEZ) in Lebanon, which after its settlement accrued many problems with neighboring countries due to borders delimitation. Another issue has been raised by the division of the areas containing oil and gas into blocs, the purpose of which was to decide the number of blocs to be explored in the first phase, but governmental approval has not been put in place yet. And so, even though the process of oil and gas exploration and production in Lebanon was expected to be implemented in a shorter period, the process has been long delayed and still has yet to see the light.

Which economic sectors hold the biggest potential for growth in the upcoming years?

The IT, oil, and pharmaceutical sectors are showing promising growth. Startups within the IT sector are becoming increasingly popular, with more than a dozen startups assisted to get their platforms running during 2016 alone. The recent discovery of oil in Lebanon, the existence of new technologies to foster the sector, and the new legislation implemented look to promote fair dealing between businesses that want to exploit Lebanese petroleum resources, so this sector looks promising too. Also, in recent years there has been increasing regional demand for pharmaceuticals. Exports to Saudi Arabia, Egypt, and Iraq have all increased, likely due to rapid population growth in those countries and high levels of chronic illnesses. Lebanon has made the most of this situation by serving as a platform for distribution of pharmaceuticals, even reaching markets such as France.