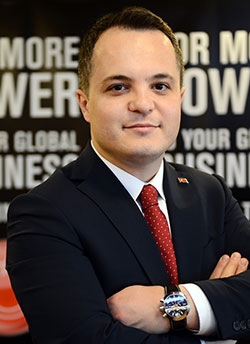 Arda Ermut began professional career at the Prime Ministry of Turkey in 2005, working as a Media and Public Relations Consultant at the Prime Ministry’s office in Istanbul. He took the position of Project Director with the establishment of the Investment Support and Promotion Agency of Turkey (ISPAT) in 2007 under the auspices of the Prime Ministry, progressing through various leadership roles at the Agency. As a Chief Project Director as of 2010, his responsibilities included leading teams in charge of the Gulf, the Middle East, and India. Prior to his appointment as President, he held the Vice President and Senior Advisor to the President positions and was serving as the Head of the Public-Private Partnership Department at ISPAT. By taking the helm at ISPAT, he also assumed the Presidency of the World Association of Investment Promotion Agencies (WAIPA), the umbrella organization that covers 170 national and regional investment promotion agencies from 130 countries.

Share on:
"Over the past 13 years, the Turkish economy has more than tripled in size."

How has ISPAT’s role in investment support developed over time?

The establishment of ISPAT in 2006 is an integral part of a comprehensive reform agenda whose main pillars are the FDI law enacted in 2003 and major amendments made to the commercial code in 2012. These two important laws helped establish a business-friendly environment by not only conferring some essential rights to international investors but by also presenting international standards, transparency, and accountability to business context. In this sense, ISPAT was established as the official organization for promoting Turkey’s investment environment and opportunities to the global business community and providing assistance to international investors at every stage of their investment in Turkey. As a consequence of such a transparent and predictable environment, together with the corporate capability and international network of ISPAT, FDI into Turkey skyrocketed. Total FDI into Turkey stood at only $15 billion until 2002, while the country was able to attract $150 billion in the last 13 years.

One of Turkey’s primary goals is diversifying its sources of FDI. How successfully has this strategy been implemented thus far?

The recent global financial crisis showed that every single economy in the world was mutually attached to one other and it damaged the ones that put a lot of eggs in a limited number of baskets in terms of export markets or FDI sources. Although Turkey had already diversified its export markets and sources of FDI at a certain level before the global crisis, the country strategically determined to have a better distribution of its eggs in different baskets to ensure balanced and sustainable proceeds of exports and inflow of FDI. For this reason, ISPAT employed its international network to attract more FDI from capital-rich and emerging countries such as Japan, China, South Korea, the Gulf countries, Russia, and the US, on top of Turkey’s traditional FDI sources. Eventually, Turkey managed to attain a more balanced inward FDI profile. The share of Near and Middle Eastern countries, as well as of Asian countries and Russia, increased considerably over the period of 2010-2014 when compared to 2002-2010 period. For instance, while Near and Middle East Asia’s share in Turkey’s total FDI inflow was 10% in the 2002-2010 period, this increased to 15% over the last five years. Similarly, Russia doubled its share and reached the 5% level. Hence, we can confidently express that Turkey has successfully implemented the diversification strategy so far.

“Over the past 13 years, the Turkish economy has more than tripled in size.”

The Southern Gas Corridor is positioning Turkey as an energy hub and a highly strategic conduit for European energy security. How is the development of energy infrastructure impacting Turkey’s overall investment landscape?

The Southern Gas Corridor is an important project for the EU that secures the energy supply of Europe by diversifying sources. The Trans-Anatolian Gas Pipeline (TANAP), meanwhile, is the most substantial component of the Southern Gas Corridor and originates from Azerbaijan and passes through Georgia and Turkey, reaching Greece. Turkey will not only become an energy corridor between Azerbaijan and Europe, but also will also participate in overseas contracting and meet a considerable amount of its energy needs from the project. There is no doubt that it is not possible for a country to attract major scale investment projects unless it has a continuous and secure energy supply. Hence, TANAP will be an enabler for new international investments in Turkey and will impact the overall investment landscape positively. On top of that, it will have an immediate value-added to the economy; the size of the project is more than $1.5 billion and it employs more than 15,000 people.

Turkey, and Istanbul in particular, have some natural assets such as geographical and cultural proximity to neighboring countries and regions that make it an attractive destination for multinational corporations (MNCs) as their regional headquarters. A total of 1.5 billion people live in a four-hour flight distance to Turkey, where the volume of economic activity exceeds $26 trillion and international trade reaches $8 trillion. On top of these natural assets, Turkey’s political and economic stability in the last 13 years has facilitated the increasing existence of headquarters of MNCs in Istanbul. In addition, there is also another opportunity for MNCs that have not yet established their regional headquarters in Istanbul to benefit from the increasing network effect of the business environment in Istanbul, where more than fifty MNCs, including Coca-Cola, GE Healthcare, Microsoft, and Intel have management bases.

How have structural changes over the past decades enabled Turkey’s strengthening economic power and affected the business environment?

Over the past 13 years, the Turkish economy has more than tripled in size, reaching USD 800 billion as of 2014. Similarly, Turkey’s exports more than quadrupled, exceeding USD 158 billion by the end of 2014. The remarkable performance with the steady growth over the last 13 years was the result of a sound macroeconomic strategy in combination with prudent fiscal policies and major structural reforms in the banking sector and in FDI laws. These reforms integrated the Turkish economy into the globalized world and created an investor-friendly business environment, while transforming the country into one of the major recipients of FDI in its region.

What are the key targets of ISPAT for the forthcoming year?

In the current global conjuncture where European economies lose their power as FDI sources, Asian economies are emerging as new sources of FDI. China and India, in addition to Japan, are becoming increasingly important in terms of their potential to invest abroad. For example, China’s outward investment amount has been steadily increasing for the last 10 years and it is expected to exceed $100 billion annually in the coming years. For this reason, we will continue with our strategy of focusing on and targeting these economies in 2014. Besides, the other key target for ISPAT is to attract technology and R&D-intensive investments in the manufacturing industry, as well as investments in the energy sector. These investments will enable Turkey to transfer technology, promote Turkey to transform into a knowledge economy, and help mitigate external fragilities. We have been successful in practicing this strategy in recent past, and I hope we will keep serving our country by attracting more investments in 2015 and beyond.

Antalya-based Sun Express broke through the ‚¬1 billion revenue barrier last year. How will it continue on this successful path and what impact will its improving stature have on Turkey’s positioning as a regional transport hub?

SunExpress, a joint venture between Turkish Airlines and Lufthansa, celebrates its 25th anniversary this year. Often dubbed the “holiday airline,” SunExpress is the most experienced airline after Turkish Airlines in Turkey and posted its largest revenue in 2014 at ‚¬1.25 billion. SunExpress is also the airline that carries the highest number of tourists in the Mediterranean and Aegean regions on scheduled flights. Contrary to other airlines picking Istanbul as their hub, SunExpress preferred to concentrate on Antalya and Izmir, flying to 35 international and eight domestic destinations from Antalya and 30 international and 13 domestic destinations from Izmir. I am also happy to join the SunExpress Board of Directors and support the joint venture company on its journey to an even more successful future.