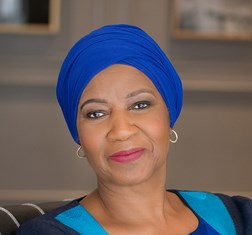 Phumzile Mlambo-Ngcuka is UN Under-Secretary-General and Executive Director of UN Women. She has devoted her career to issues of human rights, equality, and social justice. She has worked in government and civil society and with the private sector, and was actively involved in the struggle to end apartheid in her home country of South Africa. From 2005 to 2008, she served as Deputy President of South Africa, overseeing programs to combat poverty and bring the advantages of a growing economy to the poor, with a particular focus on women. She completed her PhD in education and technology at the University of Warwick, UK.

Share on:
Freeing women from the fear of domestic violence and opening up opportunities for them in business is not just about doing the right thing, but also serves as a potent formula for economic growth.

The theme for the first Women’s Economic Empowerment Global Summit is women excelling in the economy, here and around the world, wherever they are. For women to excel in the economy, we know that they need access to productive assets, resources, and technology. We also know that decent work and the income that women receive is important, but in particular that women also deserve equal pay. The capacity to start and grow their own business as entrepreneurs is an important indication of how women are excelling in economies as mentors, sponsors, role models, and mentees.

Support for changing the discriminatory social norms and stereotypes that segregate women into jobs with lower pay and limited opportunity for advancement also needs to be given attention, as these norms can hinder the effective participation of women and fuel violence. Women also need to live free from violence—free from fear—at home or at work, so that they can prosper without the stress that comes with living with abuse.

We know that if women played an identical role in labor markets to men, as much as USD28 trillion could be added to the global annual GDP by 2025. By gathering today, we are trying to make this a reality. Yet, we know that there are constraints on women’s ability to participate equally and fully in the labor market.

One of the constraints that we do not recognize fully—and yet is important to address, especially now, because we are marking the 16 Days of Activism Against Gender-Based Violence—is the challenge of violence against women. The 16 Days campaign is about ensuring that we bring forth a world where women and girls live free from violence, and the UNiTE campaign’s official color, orange, is about this brighter future that we aspire to.

Not only is violence against women a horrible human rights violation with enduring consequences for women, it also constrains economies from growing. In some countries, the average impact of this violence is 3% of GDP, and in many parts of the world this is not always acknowledged or even understood.

Let me turn back to the High-Level Panel of the Secretary-General of the UN, which gave us the report on women’s economic empowerment. In this report, we highlighted seven key drivers that can propel women’s economic empowerment. These drivers, which create positive change, include changing norms in support of women’s economic empowerment; ensuring legal protection and reform of discriminatory laws and regulations—so that we do not have laws that discriminate against women; recognizing, reducing, and redistributing unpaid care work; building assets including through women’s digital and financial inclusion and ownership of property and skills development; and changing business cultures, including encouraging business to sign up to the Women’s Empowerment Principles, which include the principle of encouraging corporate procurement from businesses that are owned and run by women.

`Another way in which we are supporting women’s economic empowerment is through a movement called “HeForShe.” This is about making sure that when women at the grassroots level are unable to rise higher in their business activities because of low wages, the men who participate in making decisions about the economy pay attention and support the improvement of women’s wages. It encourages men to stand for gender equality so that when we have a glass ceiling, the man removes it so that the women do not have to shatter all the glass themselves.

*From a speech made at the Women’s Economic Empowerment Global Summit (WEEGS) In Sharjah on December 5, 2017