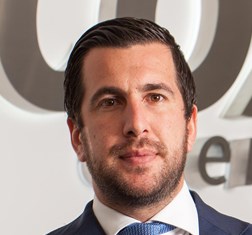 Enrique Riquelme belongs to the third generation of a family with extensive business experience. He has a degree in Marketing and Business Management. In 2009, he traveled and settled down in Panama, where, in 2010, he created Grupo El Sol, focused on mining, cement, infrastructure, and energy. The company became the largest provider of sand for the Unión Temporal de Empresas (UTE), a business association in charge of carrying out the works for the expansion of the Panama Canal. In 2014 he founded Cox Energy, a Spanish company in the renewable energy sector, PV solar, with a presence in Chile, Mexico, Panama, Colombia, Spain, and Portugal, and projects totaling over 5,000 MW. In addition to being founder and principal shareholder, he is President and CEO of Cox Energy.

Share on:
“The company already has projects in several places, but the main ones are in Zacatecas, Sonora, Hermosillo, Veracruz, Estado de Mexico, and Campeche.“

Why did you decide to enter the Mexican energy market?

We entered Mexico between 2013 and 2014 because of energy reform. Cox Energy saw that the country was heading in the right direction in terms of regulation. In Mexico, solar radiation is incredible and adequate for long-term operations. Importantly, the tenders were and are in dollars, which helped concrete the viability of our project along with the natural resources of the country that keep our operations at a low cost. The company already has projects in several places, but the main ones are in Zacatecas, Sonora, Hermosillo, Veracruz, Estado de Mexico, and Campeche. In Mexico, we have PPA with CFE and with private groups. At present, we are building several projects; the 2.5 GW we can install in Mexico will take approximately four years. We continued to study the Central American market for additional opportunities, but we found that it needed to mature. However, Chile has proven to be an interesting market as well with a stable regulatory framework.

What model do you use to finance your projects in Mexico?

We prefer to auto-finance stable projects that can provide long-term cash flow that can be collected in dollars. These factors allow us to sell cheap energy as the projects require less expensive financing. The fact that the cost of energy is cheaper does not affect the viability of projects as long as they have a long-term vision. We have 20-year contracts and have guaranteed sales during this time period.

What do you consider your star project in Mexico?

One is a small project in Sonora of 30 MW. This location has an abundance of solar resources and was the first project I bought in Mexico without a PPA. There is another project in the state of Mexico that has less radiation but is still attractive as it has the potential to expand. We are also building a project of 118 MW in Veracruz and we are going to start construction different medium-sized projects in Sonora and Campeche. The energy model and the business model in Mexico include public tenders mainly from the CFE and tenders with private companies with a proven long-term focus. We are in the entire value chain; we develop the parks and invest. Although we do not build, we subcontract that part, and we operate the plants throughout their life period. Apart from the large-scale generation, we have another business niche for Mexico: we carry the representation of our plants and those of others in the market. Another of our segments is distributed generation with net metering with large industries. Similarly, the company is in the niche market of electricity generation that has nothing to do with public or private PPAs, but with the sale of energy in the SPOT market. We will develop small- and medium-sized projects to generate SPOT market energy.

Is Mexico taking the steps it needs to increase its renewable energy consumption?

Mexico will not only meet its goals that it has set up for itself but surpass them. The country just has to ensure the future of the energy reform and allow it to mature. I trust a lot in the new government and its intent of lowering the costs of energy; this benefits us as solar energy is the most competitive. It is important that domestic or foreign investment is not be impeded. Long-term investments that generate jobs and produce cheap energy are necessary. I was able to meet with both incoming and outgoing government teams, and I was left assured. Due to sustained efforts of the government, investments have increased and new market niches have also been opened. We are betting on the Mexican market for the next 50 years. We are studying the possibility of structuring the Latin American holding company from Mexico so that it can be financed in dollars. The demand for energy does not cease, and the population continues to grow. With that in mind, solar energy is the best solution as it is the cheapest in the world.

How are you looking to continue growing in Mexico?

We want to invest USD 1.5 billion in large- and medium-scale projects, both through public PPA and private PPA. We want to continue investing in medium- and small-sized SPOT market energy projects as well as medium-term PPA projects. Mexico is one of the best countries in the world to develop energy projects because of the regulations in place.