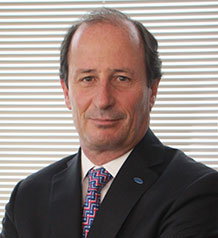 Gabriel López was appointed President & CEO of Ford of Mexico on August 1, 2010, replacing Eduardo Serrano Berry, who was named CEO of Ford Latin America. Gabriel López has worked with Ford since 1987 and has held various positions in several areas, including product development, sales, marketing, and service in Argentina and Brazil. In August 2006, López was named Vice President of Marketing and Sales at Ford Motor Company South Africa. Since 2007, prior to his current appointment, López was in charge of Ford Andina, overseeing operations of Ford Venezuela, Colombia, and Ecuador. López is a graduate of the Faculty of Engineering of the University of Morón in Argentina and also has an MBA from ESEADE.

Share on:
"Mexico is extremely important because it complements our production capacity."

What have been the most important new developments for Ford over the past two years?

We have had an interesting few years. We made a great deal of progress on the industrial front; in that period we had three investments for Mexico approved and they are currently being implemented. That means three new plants, two component plants, and one engine plant in Chihuahua, where we have been producing engines for 25 years. We have a transmission plant in Hermosillo beside the transmission plant of our partner in a joint venture with Getrag. At the end of 2017, it will start producing pilots and full production will begin around mid-2018. We also will build an assembly plant for vehicles at San Luis Potosi, which was announced in early 2016. It is in a state where we have never operated before as a manufacturer, although we have commercial presence. We are completing arrangements for the land with the industrial park and the government. Construction will commence in 2016 and the plant is expected to be up and running by mid-2018.

How would you characterize the importance of Mexico to Ford’s global operations?

Mexico is extremely important because it complements our production capacity, primarily for North America as well as for other regions. That is the case for component parts; both engines and transmissions will be exported to North America, South America, Asia, and Europe to the assembly plants that we have in those regions. For the assembly plant, the primary market will be North America, though we also export to South America and Europe. We are producing up to around 350,000 units, which is the stored capacity. When the new plant is up and running we will produce around 750,000 units per year in Mexico as well as about 1 million engines and around half a million transmissions per year. This is a large figure for company that produces around 7 million units in total globally.

What role has Ford played in developing Mexico’s role as a leader in the automotive sector globally?