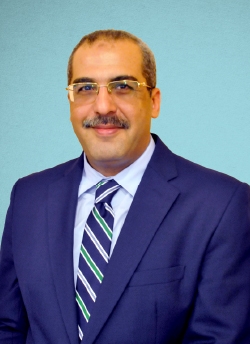 Mohamed Mamoun Al Najjar obtained his Master’s degree from Ains Shams University in 1995 in Internal Medicine. After this, he attended a number of courses related to health and health management. He began his career at Saudi German Hospital Jeddah in 2005 as Assistant COO, before being promoted to COO in 2007. In 2008, he took up his current position as CEO, and later in 2013 also took up the position of GCOO.

Share on:
Saudi German Hospitals (SGH) has a strong history in Saudi Arabia and is today of the largest providers in the Middle East and North Africa. Could you talk about where […]

Saudi German Hospitals (SGH) has a strong history in Saudi Arabia and is today of the largest providers in the Middle East and North Africa. Could you talk about where the group sits specifically in the Saudi market?

First and foremost, I would draw your attention to the group slogan and core value, “If anyone saves a life, it would be as if he had saved all of mankind.” The group was established 25 years ago with one hospital in Jeddah. The second establishment was launched 10 years later in the south of the Kingdom. And between 2002 and 2003, the Group’s vision had been set with a goal of building 30 hospitals by the year 2020, and in the process creating employment for 50,000 people. SGH is, therefore, expanding by building hospitals in the Middle East, to date having completed a total of six. Four hospitals are in Saudi Arabia, with one in Dubai and another in Yemen. By the end of 2014, or early 2015, there will be a new branch opened in Cairo.

Healthcare is a demanding business of high risk and low margins, where the complexities of the HR interface are high. As a result of this, it is not easy to find investors, and those that do, by definition, share our Group vision. One of the founders of the Group—Mr. Batterjee—was determined to enter the healthcare sector, and actively participated in healthcare dialogue between private and government entities, such as the Chamber of Commerce and the Ministry of Health. He established a healthcare committee at the Chamber of Commerce, and became its first chairman. He was also one of the pioneers to expand beyond the Kingdom of Saudi Arabia to Dubai and Yemen, among others. The hospital he built in Sanaa for SAR300 million is the only hospital in Yemen, the doors of which have remained open regardless of the prevailing conditions of the country.

The Group is committed to raising the quality of services provided, maximizing patient safety and comfort, and promoting knowledge exchange. Joint Commission International (JCI) and other national accreditation bodies accredit all group hospitals. We have a strong and comprehensive academic curriculum, and host around 12 international events per year. We also participate at Arab Health, the largest medical conference in the Middle East, where we have received awards on an almost annual basis. In 2013, we won the Excellence in Surgery Services Award.

How are the current changes to the Saudi insurance market impact your business?

A decade ago, the healthcare industry was not insurance-based. Between 2004 and 2005, a government mandate stipulated mandatory insurance for all expatriates. At that time, the insurance industry was booming as there were 8 million-10 million expatriates in the Kingdom. Today, the insurance companies play a major role in the healthcare business. In some regions (central and western) the insurance coverage accounts for up to 70% of private sector healthcare services. The insurance companies have become a third party in the equation of client and hospital. Insurance is indeed based on premiums, and two factors are key, namely the frequency of visits and the average claim. These determine pricing in the healthcare industry. Providers raise money to cover the cost of a service, and insurance companies minimize their costs by reducing premiums to gain market share. Meanwhile, another change due to occur within the next few years will mandate compulsory insurance for Saudi citizens.

How is the range of medical services likely to have expanded by that point?

Our main scope is to provide a comprehensive range of hospital services. We are not trying to become a narrowly specialized medical center, although the group is considering the option of setting up a specialized center for cardio or maternity, for example. Meanwhile, we are working on advancing certain services, such as orthopedics, endoscopy, and laparoscopic surgery.