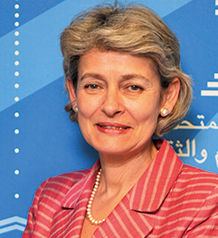 Irina Bokova, from Bulgaria, was first elected the General Director of UNESCO in November 15, 2009, and was successfully reelected for a second term in 2013. She is the first woman and the first Eastern European to lead the organization. As Director-General of UNESCO, Bokova is actively engaged in international efforts to advance gender equality and education, as well as combat the financing of terrorism by preventing the illicit traffic of cultural goods. A leading champion in the fight against racism and anti-Semitism, Bokova has spearheaded UNESCO’s activities on Holocaust remembrance and awareness and is the first to appoint a Special Envoy for Holocaust Education.

Share on:
With 55 years of partnership between Lebanon and UNESCO, what are the major areas of cooperation? UNESCO has had a long-standing partnership with Lebanon since the establishment of its office […]

With 55 years of partnership between Lebanon and UNESCO, what are the major areas of cooperation?

UNESCO has had a long-standing partnership with Lebanon since the establishment of its office in 1961, with collaboration in all of the organization’s areas of competence, focusing primarily on education and culture. The strong links with Ministry of Education and government agencies facilitate the implementation of UNESCO projects to achieve its goals. UNESCO’s work in Lebanon has undergone dramatic shifts in nature and scope since 2011 at the outbreak of the Syrian crisis. The protracted crisis has brought about unprecedented humanitarian situations and put enormous pressure on Lebanon and its communities. In this context, UNESCO’s work has primarily focused on responding to the crisis in the context of the Lebanon Crisis Response Plan through mobilizing technical and financial resources of the organization and through interventions in education, social and human sciences, communications and information, and culture to help build resilience among learners and communities. More specifically, UNESCO’s work in education aims to address both the humanitarian and development aspects brought about by the crisis through bridging the learning gaps for the youth, both for Syrian refugees and vulnerable young people in host communities. UNESCO’s response also targets teachers, mentors, and facilitators as well as ministries’ technical officials. The crisis in Syria has created a need for specific support in education in emergencies and quality education to which UNESCO actively engages from upstream analytical, capacity building, and downstream operational levels.

UNESCO has been working with the Ministry of Education and Higher Education (MEHE) in the Reaching All Children with Education (RACE) program, now in its second phase. How has UNESCO contributed to the progress of this program?

As a fixed member of the RACE Executive Committee (REC), UNESCO participated in the technical subcommittee that developed the RACE II plan and results framework. UNESCO advocated for the inclusion of secondary education provision in the RACE II plan following ongoing initiatives to support formal secondary education in Lebanon. Since 2015, UNESCO remains the sole agency that covers the enrollment fees of all non-Lebanese students in public secondary schools across the country. For the 2016-17 academic year, UNESCO supported the enrollment of 3,075 non-Lebanese young girls and boys, provided school supplies through the “School in a Bag“ initiative for 5,360 Lebanese and non-Lebanese students in 40 public schools country wide, and distributed school stationery to 200 public secondary schools. In an effort to support school administrations and interactive learning, UNESCO also provided electronic equipment to a number of public secondary schools. To increase the demand for education, both formal and non-formal, UNESCO actively participates in the nationwide, MEHE-led Back-to-School campaign, alongside other UN agencies. The campaign is an ongoing, collective effort throughout the academic year and consists of outreach campaign to local and international NGOs working in the education sector. It also focuses on retention to improve education quality. UNESCO has taken the lead in outreach and retention efforts for post-basic education, filling an important gap. In an effort to help ensure that quality education is provided at the secondary level, UNESCO also delivered capacity development training for secondary school directors and teachers which aim to promote learning and social cohesion among Lebanese and non-Lebanese students. Furthermore, UNESCO strongly believes in supporting the Lebanese government in providing diversified learning pathways to all learners. Within this context, UNESCO is currently working toward completing the Non-Formal Education policy framework with MEHE. In addition, it will be kicking off the development of the Secondary Accelerated Learning Program with MEHE and the Center for Educational Research and Development (CERD). UNESCO will support CERD’s technical teams to develop the program’s framework, as well as the content, the training of the teachers that will deliver the program, and the pilot implementation phase in early 2018.