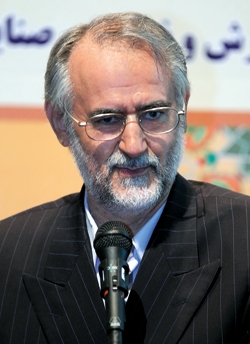 Deputy Minister of Industry, Mine & Trade, Islamic Republic of Iran

Gholamreza Shafei was born in 1951 and graduated from Sharif University of Technology in 1975. He was appointed Head of the National Iranian Industries Organization in 1981, and between 1983 and 1984 he worked as the Deputy Industry Minister. In 1984, he was made the Minister of Industry. He occupied the position until 1989, after which he was appointed Deputy Head of the Planning and Budget Organization, where he worked until 1992. He served as the Minister of Cooperatives until 1997 until once again becoming Minister of Industry. He left the position in 2000 and is currently Deputy Minister of Industry, Mine, and Trade and Chairman of the Board at the Industrial Development and Renovation Organization of Iran (IDRO).

How would you evaluate IDRO’S industrial development?

IDRO was founded 45 years ago, and we have been inspired by Italy throughout our establishment. We studied industrial development in Italy and founded IDRO in Eni’s footsteps. We have established different sectors of action such as machinery equipment for industrial and agricultural usage and the marine industry. I believe that IDRO has played a central role in Iran’s industrial development. For example, among our sectors of action, we added the automotive industry after the Islamic Revolution in 1979, and this sector has played an important role in Iran’s industrial development. We know that we won’t get to the point the large industrialized countries have reached in the short term, but for 45 years we’ve been trying to get closer to that level. Before the Revolution, we were investing in steel production—we had a contract with the former Soviet Union, producing in Isfahan, but the production was low. We produced less than 1 million tons per year; we switched our location, but again we had made several steps forward in the steel and cement production industry. In 1977, before the revolution, total cement production was 6.2 million tons per year; now, it is more than 70 million tons annually. Although we import steel, we are able to export steel and cement to other countries. Other fast-developing areas include the pharmaceutical, paper, sugar, packaging, and textile sectors. The food industry has also developed very rapidly in recent years.

On which industries is your investment focused in 2012?

Our main targets remain the oil and gas sector, railways, and transportation, as well as high-tech industries. The development of the country is based on two factors: the Five-Year Development Plan (FYDP) and Iran’s 2025 Vision. In the FYDP, we are forecasting that $250 billion will be invested in the oil and gas sector. In that devised perspective, an organization such as IDRO, which focuses on machinery and relies on three sectors—oil and gas, railways, and high technology—can help the country develop further. Iran is a vast country that needs a functioning railway system due to its geographical location among the North-South-East-West corridor to connect and develop. This means not only trains, but also underground public transportation that will connect people within our cities. That is why we are focusing on these segments; it helps the country grow and develop. In terms of the maritime industry, Iran has extensive coastlines, and we have a duty to target the shipping industry as well. We have plans to build a servicing station and a factory for heavy machinery as part of a major port development project. Through these projects we aim to attract foreign investors and increase technology transfer between Iran and other countries.

In the framework of the privatization program, how is IDRO supporting local private companies in the high-tech industry?

Our organization supports companies and industrial players through an exchange of new ideas and know-how. We have contracts with universities, linking together professors, students, and entrepreneurs. If a student or a professor has an idea, we help them turn their business idea or new technology into an industrial project. We provide entrepreneurs with the machinery and equipment to realize their new projects, and this cooperation can range from a 0% to a 100% investment. In developed cities such as Tehran, our cooperation with local companies stands at a 40% or 50% maximum, but when it comes to cities that are less developed, we can invest and cooperate with local companies at up to 100% of the budget. Sometimes we need capital in order to invest and start new companies, which is why we link up with banks that offer loans with low interest rates.

Which area of the industrial sector is in need of further investment?

We need capital and investments in every sector. However, according to the FYDP, the target for investment in the energy sector is $250 billion, and the railway industry is slated for more than $33 billion in investment. We aim to direct capital toward the further development of power plants. In collaboration with the private sector, we are predicting progressive growth of 8% for the Iranian economy, and the industrial sector is the driver for other segments of the economy as well.