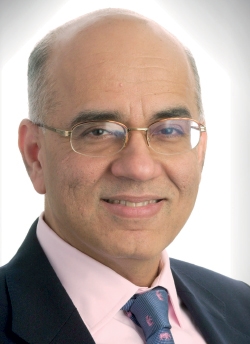 Masood Ahmed has been Director of the Middle East and Central Asia Department of the IMF since November 2008. He obtained his graduate and post-graduate degrees in Economics from the London School of Economics, where he also served on the Economics Faculty. Before taking up his current position, Ahmed was the Director of the External Relations Department in the IMF since May 2006. During 2003-06, Ahmed served as Director General for Policy and International Development at the UK government’s Department for International Development (DFID). Between 1979 and 2000, Ahmed held a number of positions in the World Bank. He worked for about a decade on country programs and projects in different regions and, for a further 10 years, on international economic policy relating to debt, aid effectiveness, trade, and global economic prospects.

Share on:
Masood Ahmed, Director, Middle East and Central Asia Department of the IMF, on the measures the Fund is taking to help develop Kazakhstan's financial sphere.

Countries in the Caucasus and Central Asia (CCA) have recorded significant economic achievements since independence. They have grown more rapidly—on average by 7% over 1996—2011—than those in many other regions of the world and poverty has declined. Inflation has come down sharply from high rates in the 1990s and interest rates have fallen. Financial sectors have deepened somewhat, as evidenced by higher deposits and lending. Fiscal policies were broadly successful in building savings prior to the global crisis and those buffers were used effectively by many CCA countries to support growth and protect the most vulnerable as the crisis washed across the region. CCA oil and gas exporters have achieved significant improvements in living standards with the use of their energy wealth.

As a trusted advisor, the IMF regularly consults with country authorities on their economic policies and challenges. In the CCA region, while macroeconomic achievements have been notable, lowering output and inflation volatility and reducing the reliance on energy resources and remittances for growth have been at the core of IMF advice. Moreover, central banks in the region need to gain more independence, to ensure that monetary policy is effective in promoting financial stability. At the same time, the prevalence of dollarization, which reflects weak confidence in many CCA currencies, complicates policy delivery.

Over the coming decade, CCA countries have the opportunity to boost their economic development and strive to become dynamic emerging markets. This opportunity, provided by strong commodity prices and healthy remittance flows, should help create the macroeconomic space to pursue ambitious policy and structural reforms.

Kazakhstan embodies many of the region’s successes and challenges. Its economic recovery from the global crisis was rapid, with output growth of around 7.5% in 2010-11. Real GDP growth slowed over the last two years, mostly reflecting declines in oil and agricultural output, but was solid at around 5%-6%. External pressures on prices have eased and inflation is now below the authorities’ objective range of 6%-8%. However, a persistently large stock of non-performing loans (NPLs)—a legacy of the global crisis—is holding back a meaningful recovery in the health of bank balance sheets.

The growth outlook is strong. In 2014, we expect real GDP to expand at around 6%, moderately below the growth rate in 2013, reflecting recovery of investment and household demand. Over the medium term, solid growth prospects are driven by oil production, which is expected to increase by a third over the next five years, principally because of the Kashagan oil field. There are some downside risks to the outlook, primarily emanating from the external environment, including from a possible sustained slowdown in Russia and China, regional issues, and lower oil prices.

In view of limited progress on the resolution of NPLs, a more proactive posture could be useful. Despite the introduction of new measures in 2012, NPLs remain high at around 30%. New ceilings on NPLs (15% in 2014) were a step in the right direction, but require proper enforcement, including through effective supervisory actions. The IMF has been helping through organizing seminars and providing technical assistance, including on international best practice, and further collaboration with the authorities is envisaged in this area.

The central bank has begun to work on strengthening the monetary policy framework, with particular emphasis on enhancing liquidity management and the transmission mechanism of monetary policy. The prospective introduction of a new benchmark policy interest rate, guided by active open market operations, is indeed welcome. To anchor expectations about policy intentions and operations, the IMF and the authorities have discussed the importance of communicating the transition plans openly, and, once implemented, elaborating on the factors guiding the interest rate decisions in the post-policy meeting communiqué and quarterly inflation reports. Over the medium term, greater exchange rate flexibility will be essential to support a move to inflation targeting, a stated goal by the National Bank. Here too, the IMF stands ready to help the authorities build on lessons learned from the international experience.