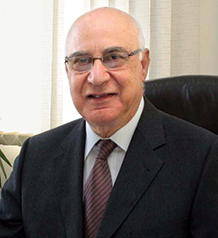 Salam S. Rayes’ involvement at the American University Hospital of Beirut began with his service as Employment Officer (1965) followed by his role as Assistant for Administration (1969), then Assis tant Director(1972), succeeded by his appointment as Manager of Health Services Administration for AUH Services Corporation in Bahrain(1976-1978). He ended up as Director of Personnel. In 1983, he was offered the position of Hospital Director at Saint George Hospital, Beirut. Seven years later, he became the CEO of one of the top three hospitals in Lebanon, heading the expansion of the University Medical Center. Rayes’ educational background is in Public Administration (AUB graduate 1963) and Health Services Administration (MA from George Washington University —Washington DC, 1972).

Share on:
TBY talks to Salam S. Rayes, CEO of Saint George Hospital University Medical Center, Beirut, on the role of R&D at the hospital, the challenges faces the health sector, and Lebanon's potential to become a medical hub for the region.

What is the role of R&D and innovative technology at Saint George Hospital University Medical Center?

We do not conduct a significant amount of clinical or applied research because of a lack of funding. We do not fund research ourselves, and the pharmaceutical companies do not foot the bill unless it is in their interest, therefore the research that is being conducted is very minimal and limited. Advanced technology is a separate issue—our doctors and our senior staff are our ears and eyes, and they travel a lot, attending conferences and visiting other hospitals.

Is it difficult to stay competitive with so many hospitals and clinics opening in Lebanon?

It could be a challenge, however we are not focused on what they are doing, we only concentrate on ourselves and on delivering the best that we can. If someone is delivering the service better than us, they may have better resources than us, but we are not in competition with them. We know our resources, financial and otherwise, and we operate accordingly.

How would you describe the relationship between the Lebanese universities and clinics?

What challenges are facing the healthcare sector in Lebanon and what is your assessment of its development?

One major challenge is the general lack of governance in this sector. Everything in the country—including healthcare—is based on individual efforts at all levels, both academic and non-academic. As a result, the sector suffers from a lack of a unified strategy and common vision as to the future of healthcare services. But despite these challenges, Lebanon remains well-positioned for its excellent services in healthcare and universities. This is the case when successful individualistic behaviors take over conformity. The literacy level in Lebanon is generally elevated and the Lebanese at large are well educated. As such, individuals try to improve their own niche or area of expertise. This is why collectively the Lebanese are flourishing. If it were planned, it would not have succeeded. Thirty years ago, they brought into the country a specialist in government economics. He spent a year in Lebanon, and finally concluded that he could not do anything and recommended to remain as we are, adding that if we would organize the health sector could fail.

How would you assess Lebanon’s potential to become a medical hub for the region?

Do not underestimate Arab countries’ capabilities. Saudi Arabia and the Gulf countries have high-quality hospitals, equipment, and training of doctors and health workers. If you look at the admissions at our big four hospitals, patients are predominantly Lebanese, there are not many non-Lebanese being referred from Arab countries to come to Lebanon. Over the past decade the political situation, coupled with the unsteady and often insecure climate, may have affected the potential to bring over patients from other neighboring countries. Unfortunately, health tourism has not succeeded here. Our health tourism should be addressed to Arab countries, but this is not happening. If patients go to Europe and take their families, they are crippled if they do not speak the language, while if they come to Lebanon, the families can speak Arabic everywhere. Regardless of that they still go to Europe, not Lebanon, and this is a huge missed opportunity.