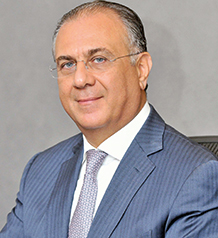 Ghassan T. Assaf is a banker, businessman, and philanthropist. He holds a master’s degree in economics and finance and a bachelor of science degree in electrical and electronics engineering from the University of Manchester. He started his career at Citibank in New York in 1980 and moved to Citicorp Investment Bank in London in 1981 where he worked until 1985 as a loan syndication manager for the MENA region. Assaf joined BBAC in 1985; he was appointed General Manager in 1992 and became Chairman/CEO in 1996.

Share on:
TBY talks to Ghassan T. Assaf, Chairman & General Manager of BBAC, on the bank's anniversary, performance factors, and the vision for the future.

This year marks the 60th anniversary for BBAC. What are the bank’s main accomplishments, and how has it transformed throughout its history?

BBAC is one of the few banks in Lebanon that still retains the same DNA it had at its inception 60 years ago. My father established this bank in 1956, and he reflected his culture and values into it. Among the most important values, providing jobs to his fellow Lebanese, increasing their living standards, and integrating the youth into the labor market were the main drivers for him. After he passed away, I took over the leadership of BBAC in 1996, and I kept holding firmly to those values my father long fought for. Now, BBAC is one of the major banks in Lebanon with 40 branches covering the territory. We were the first banking institution to believe in rural development and to grant loans to small businesses in the extensive rural areas in the country; we contributed to bringing many small businesses back to their feet and being sustainable. Over time, we also evolved to become the first bank to introduce computing into our systems, to become the pioneers in IT technology applied to banking services. We have also believed in Lebanon, and we have kept an active presence in this country regardless of the political or security situations we have been through.

What factors account for your good performance, despite regional instability and economic shocks?

In 2015, BBAC ranked number one in terms of growth in deposits and number three in terms of the loan portfolio among Lebanese banks. We achieved this due to our good reputation and our decision to be more aggressive in marketing, both locally and internationally, where we have started to make some good inroads. We have been aggressively targeting corporate clients, and this led us to succeed in increasing our loan portfolio substantially. Outside of Lebanon, we have been able to maintain our presence in the Iraqi market despite the insecurity and the drop in oil prices that have hindered that country’s economy. We were among the first foreign banks to go into Erbil, and this meant we were able to choose the cream of the business clients. Rather than being affected by the situation in Iraq, we have seen a small growth in profitability. We were also active in 2015 on treasury operations and our trading assets, as well as on the retail and consumer lending segments, where we maintained a healthy ratio.

How has BBAC become involved in the promotion of entrepreneurial projects and the development of the knowledge economy in Lebanon?

This sector is expected to balance the brain drain effect in favor of Lebanon since large parts of its educated youth will stay in the country. The Central Bank’s efforts have driven this industry to new spheres and have encouraged commercial banks to follow suit in funding these projects. We believe banks can have a larger involvement if we have specific members of staff dealing with the knowledge economy, which is why we have decided to invest in the sector indirectly through the capitalization of incubators and accelerators and promoting young entrepreneurs by lending to them through Kafalat’s loan guarantees. We see a great future in this industry and the development it will have for small businesses operating in sectors such as agriculture, small industries, artisanship, and tourism.

What is your vision for BBAC in this landmark year for the bank, and what are your main objectives for the next two or three years?

We will continue expanding our presence in Lebanon to cover any regional gap; we will continue to strengthen our external market penetration. We will engage in a larger number of IT projects since this is the future of banking. Finally, one of our upcoming projects is to launch the rebranding of the bank to inject fresh air to our image and increase our visibility.