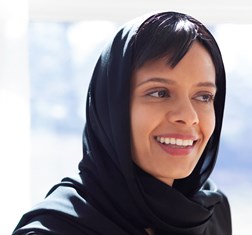 Princess Dr. Reem bint Mansour Al Saud was appointed a member of Saudi Arabia’s Permanent Delegation to the UN in New York in 2015. Princess Reem holds a master’s degree in social policy and a PhD in Middle Eastern studies, both from Oxford University. She was a postdoctoral research fellow at Harvard’s Kennedy School of Government, working on enhancing Saudi labor policies, especially those concerned with women. Her breadth of experience includes economic analysis, capacity building, and outreach. She is an expert in evidence-based policy design, women’s labor force participation, and the use of legal, financial, and economic instruments to achieve sustainable development.

In your current role, how are you able to drive the agenda of sustainable development and promote female leadership?

When I joined the Permanent Delegation of Saudi Arabia to the UN, the UN 2030 Agenda was still being negotiated, so I participated in the negotiations on behalf of Saudi Arabia. The focus of the UN 2030 Agenda is to address the root causes of poverty and eliminate it by 2030. The UN 2030 Agenda has three dimensions—social, economic, and environmental—and these are all interconnected, because one cannot address one without addressing the others. We have formulated 17 goals, and number five is about gender equality. Each goal has a specific set of targets, and these have a specific set of indicators or KPIs to determine what we have actually achieved. If we want to thrive as a people and a planet by 2030, we should all work together to do the best that we can.

How do you assess the changes in Saudi Arabia in recent years when it comes to your agenda, and what are your main advocacy points in terms of more female leadership and equality?

Allowing women to drive was definitively something that had to happen, because there is no way we could have grown as a nation and as people with half of society marginalized and not even being able to drive. Allowing women to drive and securing safer public transportation boosts the economy and allows women to take control of their lives and contribute as full members of society. A great deal of work has been done in terms of providing job opportunities for women in Saudi. Under Vision 2030, 450,000 jobs have been created for women, and female labor force participation has increased from 12% in 2009 to 80% in 2017. One thing I would like to see change—not only in Saudi Arabia but everywhere else in the world—is meaningful employment for women. Most women end up working in low-skilled jobs that do not have a career path. In terms of policy, there has to be a focus on equal opportunities for both men and women. Whatever is perceived as traditional jobs for men or women is being questioned because in Saudi Arabia there are more women with higher education than men. This says a great deal about the jobs they would like to end up pursuing. Therefore, investing in women’s career development and providing the necessary training and equal job opportunities for them to also have a career is important.

What would be your message to young female graduates entering the labor market?

First, because of the family structure in Saudi Arabia and the Middle East in general, the male leader of the house usually provides for everyone. Most of the time, men and women start seeking job opportunities after they graduate. However, I would suggest getting the necessary skills even before graduating because this will help them understand the labor market and its needs and the career path they might want to choose or switch to. Second, my message to women is to not be afraid to communicate your needs. Many times, women are afraid to say they are not feeling well. In North America, some companies offer mental health days, so you can ask for a day off simply because you are tired or need a break. I also notice in my work environment that women take on dead-end tasks, such as getting the coffee, typing, or writing emails without necessarily doing anything that can intellectually contribute to the job or the conversation. My message would be to not be afraid to say no and be choosy about your career path and what you want from your work.