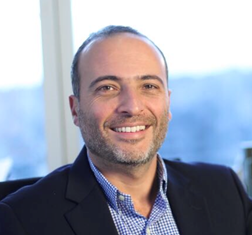 George Rbeiz is the General Manager for the Middle East and North Africa at Diageo. He has 17 years of FMCG management experience, working at global leading multinationals such as Nestlé and Mars, in addition to international and multicultural experience gained through different assignments in the Levant, Gulf, and the US. He joined Diageo MENA a year ago after being the Mars Chocolate Regional Market Manager for Southeast US.

Share on:
Lebanon is renowned globally for its nightlife and entertainment, thanks in part to Diageo, a multinational alcoholic beverage company promoting responsible drinking and having a great time.

The on-trade has always been a building block and foundation of Lebanon’s hospitality and tourism industries, positioning the country as the Middle East’s reference for nightlife and entertainment. Lebanon’s vibrant nightlife scenes are mirrored in different countries in the MENA region, particularly in Dubai, and that keeps our industry busy. Equally important, Lebanon remains a hub for innovation, mixology capabilities, and expertise, and an open platform for premiumization and eventually for growth. We have seen positive shifts in the on-trade space recently with new ventures and venues emerging, but that doesn’t particularly indicate solid growth. 2018 was not the best year, and that’s due to the political and economic instability. The tourism industry didn’t grow as expected because of the decision of many Gulf states nationals not to come to Beirut and a decline in the number of Lebanese expat visitors. The biggest challenge in 2018 was a significant drop in consumer spending on entertainment and particularly on alcohol, which is why the on-trade channel suffered. On the positive side, the president’s determination to implement serious corrective measures and carry out a short-term impact strategy with new faces in the government makes me optimistic for 2019.

How would you compare the arak and champagne segments?

Champagne is one of the most expensive drinks and falls into the fine drinking category. This category is where consumers pamper themselves and take it to the next level. Due to economic uncertainty in 2018, many weddings and big events were canceled or postponed, and that caused a drop. The second reason is the change in consumer behavior and preference for lower-priced drinks. The plunge in champagne YoY in 2018 was in double digits; however, in the off-trade space, we saw slight growth but that didn’t really support our total sales because the majority of champagne consumption lies in the on-trade. Another key reason is the rise of sparkling wine, which is 50-60% cheaper than champagne but similar in some ways. Lebanon is known to produce the best arak and in the recent years we have seen a rise in home distilled or craft arak, as opposed to commercial brands. This remains the drink of choice during Sunday lunches or Lebanese gatherings. The arak category is declining by 16% in value and by 9% in volume, which means people prefer cheaper or home-distilled arak. Another reason for the decline is that arak is no longer trendy among the youth. Furthermore, arak was never promoted or served as an aperitif or mixed with other ingredients or served at the bar; it was always associated with food and that of course narrows down growth avenues.

What are Diageo’s objectives for 2019?

We are extremely proud of our people and purpose of serving our community. We seek to educate our drinkers, drive positive change, help and educate the community, and promote gender equality. Over 50% of our workforce is female.
Do you have any CSR projects for 2019?
We are one of the few companies that is driving a busy corporate and social agenda. In 2018, we launched various activities, which are ongoing, and are part of a five-year plan. Diageo partnered with Kunhadi and launched ‘Save The Night,’ a program that includes on-trade staff training for responsible serving, venue protocol, and promotion of industry code of practice. In November 2019, we launched the National Road Safety Research and Data Center in partnership with the National Road Safety Council and a university. This is intended to provide evidence and data to support policy reviews and improve enforcement of traffic laws. We celebrate life every day, everywhere; however, we want it done in the right way. We are looking to create a database with the help of universities to build evidence for support strategies in a bid to reduce alcohol-impaired driving crashes.