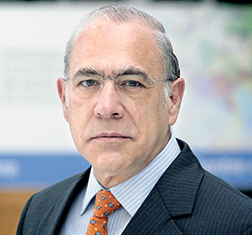 Born in 1950, in Tampico, Mexico, Angel Gurrí­a joined the OECD after a distinguished career in public service. He served as Mexico’s Minister of Foreign Affairs from 1994 to 1998, and Minister of Finance and Public Credit from 1998 to 2000. Secretary-General of the OECD since 2006, he has reinforced the OECD’s role as a hub for dialogue and debate on global economic policy. Mr. Gurrí­a holds a B.A. degree in Economics from UNAM, and an MA in Economics from Leeds University.

Given the slowdown in structural and policy reform in more advanced economies, what can be done to motivate a more active uptake of new policy?

A return to the pre-crisis growth path remains elusive for a majority of countries, many of which are confronted by similar challenges: slowing productivity, high long-term unemployment, and falling labor force participation. Restoring healthy growth, while ensuring that the gains are broadly shared, requires determined and systematic actions across a broad range of policy areas. The OECD’s annual flagship report “Going for Growth,” released last February in Istanbul during the first G20 finance ministers meeting of the Turkish Presidency, has shown that, unfortunately, the pace of reforms has slowed in a majority of advanced economies in the past two years. We understand the difficulties many governments face in pushing for reforms in a context of chronic demand shortfalls and limited budgetary leeway. Yet we see a bigger risk in the slower pace and breadth of reforms: that of a vicious circle whereby weak demand undermines potential growth, which in turn further depresses demand, as both investors and consumers lose confidence.

How do you assess the structural reforms and the PPP programs ongoing in Turkey to increase the role of the private sector in infrastructure and the economy?

Turkey’s commitment to a package of 25 “structural transformation programs” is a promising example of a broad approach to reforms. Planned measures to promote technological skills, to foster flexible security in labor markets and to raise women’s participation in economic life will boost private sector confidence and investment, and lift potential growth. “Promoting Investment” is the second “I” of Turkey’s G20 growth narrative, so successfully mobilizing PPPs is vital on the home front. Turkey’s domestic savings continues to fall short of its vast investment needs. Moreover, the government is determined to maintain public borrowing at a low level, and not to permit a drift in the public debt/GDP ratio. This opens the door for PPP projects. The 10th Development Plan 2014-18 projects total public infrastructure investment of $250 billion over five years, with additional PPP investments of $100 billion. PPP projects will include the construction of a nuclear power plant, Istanbul’s third airport, urban renewal projects, rebuilding earthquake-prone neighborhoods, harbors, hospitals, motorways, and high-speed railway tracks. To endow this huge PPP portfolio with a sound governance framework, a special committee on PPPs recommended the adoption of a new framework law to help ensure diverse contractual forms, fiscal transparency, and EU-compatible pro-competitive procurement procedures. These recommendations are most welcome.

As Turkey targets exports of $227 billion by 2018, what has to be done to further integrate Turkey in the global economy?

If exports continue following the 2010-14 growth trajectory, they would reach $225 billion by 2018. However, this assumes a relatively subdued global outlook. However, if the pace of the global recovery picks up and if Turkish exports rise as fast as during the 2000s, exports could actually reach $280 billion by 2018. Achieving stronger export performance is crucial for rebalancing domestic and external demand, and reducing the current account deficit. We emphasize three factors for Turkey’s progress: first, achieving additional structural change in the business sector, with larger size and better capitalized exporters, to foster price and non-price competitiveness; second, achieving deeper participation in global value chains, notably with European manufacturers; and third, further diversifying trade towards higher growth export markets. Since 2005, nearly 20 new bilateral trade agreements have been finalized and exports to the countries concerned have increased very swiftly.

What strategy does Turkey need to continue its globalization process while simultaneously maintaining economic stability?

Turkish exporters have managed to rapidly grow their businesses across the region over the past decade, and investments have also increased rapidly. Expanding links with regional partners has greatly benefited Turkey, in particular the hitherto less developed eastern and southeastern regions. The volatile political and economic conditions of neighboring countries are however obvious potential sources of instability for the Turkish economy. We witnessed this in 2013, as imports from the MENA region tumbled, and in 2014 with Russia and Ukraine, when their imports from Turkey collapsed. Against this backdrop, Turkey could deepen its economic integration with the European Union—which accounts for 44% of Turkish exports—as demanded by the new EU strategy adopted in 2014.