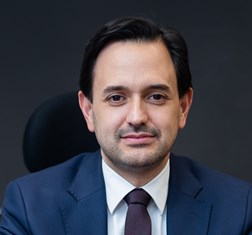 Minister of Energy and Mines,

Diego Mesa is Colombia’s new Minister of Energy and Mining. He is an energy and extractive industries leader with over 15 years of experience in management and advisory roles in government, multilaterals, and the private sector. As Colombia’s deputy energy minister between 2018 and 2020, he co-led the design and implementation of the country’s energy transformation policy. Before joining the government, he spent six years with the International Monetary Fund. Prior to that, he spent four years as a manager and senior economist in the consulting and deals practice of PriceWaterhouseCooper in Canada. He holds an MA in economics from McGill University and has been a CFA chart holder since 2012.

Share on:
The Ministry of Energy and Mines is focused on making the energy and extractive industries much more attractive for investors.

How is the government supporting the development of the mining industry, and what policies are in place to this extent?

One of our main policies is the diversification of the mining matrix. Colombian mining exports are dominated by thermal coal, but we have significant potential in metallic minerals, in particular gold and copper, which happen to be two of the minerals critical for the energy transition. We have a competitive process to award mining blocks or contracts. We started with five blocks for copper in La Guajira and Cesar. We started the diversification process in 2020 with the Buritica mine, the largest underground mine in Colombia. The second important project is the Gramalote mine in Antioquia, whose construction phase will start in 2H2021. The production of gold increased by 40%, and in 4Q2020 we produced around 13.9 tons of gold, the highest production of gold in the last four years. We also have a strategy of three corridors of gold and copper. There are potential projects starting in the southern part of the country going to Antioquia, Chocó, Bolivar, Córdoba, Cesar, and La Guajira. In terms of the general policies to increase investments, we will gradually reduce tax rates from 33% to 30%, and we fixed the VAT payment on fixed assets 100% creditable to corporate income tax; basically, we eliminated VAT on such investments. Similar arrangements were made to other taxes like the Industry and Commerce Tax (ICA). The copper market will tighten over the next decade as energy transitions accelerate.

What is the country’s strategy to diversify the energy matrix and reach carbon neutrality?

In 2019, as a result of the national electric vehicle law, Colombia became the number-one country in Latin America in sales of EVs, with almost 1,000 units in that year. Fast forward to 2020, and despite the pandemic, Colombia increased its sales of EVs and hybrids by 90%, and for the second year we had the highest EV sales in the region. Colombia has taken off as the leader of EVs and hybrids in Latin America, and we expect to reach about 10,000 in 2021 alone. The fiscal incentives include a reduced VAT rate of 5%, no import duties, a maximum 5% tax on vehicles, commercial discounts on insurance and other services, and exemption from restriction of mobility like Pico y Placa or day without a car. However, electric mobility only works if the electricity that we produce is clean. Colombia has one of the cleanest matrices in the world because we depend on hydropower, but we have significant potential for solar and wind. This was one of our priorities when we took office, because that potential was unexploited. We did an auction for variable renewables in October and decided to let the private industry join the platform. We ended up with 2,500MW, which means we will go from less than 0.5% of the power in the matrix made up of variable renewables in 2018 to at least 10% by 2022. Our goal is to go to 1,000MW. We will have the first wind project in La Guajira in December.

How is the ministry working to widen access to energy resources and bring energy to communities?

We still have a significant gap in energy coverage, around 2-3% of the population, which amounts to 400,000-500,000 households that lack access to electricity. The goal for this government was to reach 100,000 families that do not have energy in the coming four years. The past administration reached about 67,000, so we increased that significantly. We have about 15,000 homes with solar panels, especially in remote, rural places that cannot connect to the grid. Roughly 28,000 are in places affected by the conflict, so it is part of our equity strategy. By the end of 2021, the timeline is to reach 70,000 new homes. This will also be complemented by efforts by the private sector.