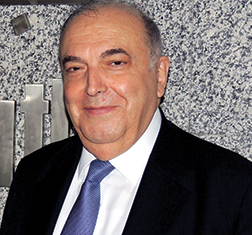 Dr. Ghaleb Mahmassani obtained a bachelor’s degree in political science from the American University in Beirut in 1962, with licenses in French and Lebanese law in the same year. He received his PhD in law from Lyon University in 1966. As well as being the Vice President of the Beirut Stock Exchange, he has been an Attorney at Law and Legal Counsel since 1962, and an Arbitrator since 1976, and has been active both academically and professionally at the international level. He served as a Member of the International Court of Arbitration of the International Chamber of Commerce (ICC) in Paris from 2000 to 2005.

Share on:
TBY talks to Dr. Ghaleb Mahmassani, Vice President of Beirut Stock Exchange (BSE), on promoting diversification, the privatization of the BSE, and recent transformations of the capital market authority.

How would you evaluate BSE’s operations during 2015?

The year 2015 witnessed relatively modest trading movement on the BSE. In the year’s 241 trading sessions, 74.6 million shares were traded for a value of USD629 million, compared to 96.8 million shares valued at USD661.4 million for the year 2014. This represents decreases of 22.9% and 4.9% in the volume and value of shares traded, respectively. Total listed capitalization remained almost unchanged at the end of the year 2015 at the level of USD11.22 billion. Finally, the value of secondary public offering in 2015 decreased by 85% to reach USD80 million against USD521 million in the year 2014. This may be attributed to the political situation in the country and the large extent to which this situation is deterring administers to get involved in the BSE or for the already listed ones to come out with new activities.

Nearly 90% of companies listed on the BSE belong to the financial sector. How are you attracting companies from other sectors to diversify operations?

Diversifying the structure of listed companies on the BSE is one of the biggest challenges the stock market has been facing since its reopening 20 years ago. Lebanese businesses are in their vast majority small, family-owned firms that prefer to finance their activities through bank credit in order to keep control over their companies. These companies do not see the advantages of being listed on the stock exchange; clearly, they are more influenced by the banking culture and would rather prefer to go under bank’s umbrella. On the other hand, almost all big companies are still owned by the state with no clear plan for privatization in the near future. We are trying to correct the current situation by giving increasing attention to educational and promotional programs that aim to attract and convince medium-sized Lebanese companies to list their shares on the BSE and to increase their capital through the broadening of the shareholders’ base by highlighting the importance and advantages of financing through the stock exchange. We need first to recognize the specific needs faced by start-up companies and address these in an appropriate fashion. Start-ups need the financing that the BSE can help raise. At the same time, they are not always prepared to meet reporting requirements that currently exist on our exchange and do not have the kind of resources necessary to inform investors on a regular basis about company developments. We can help by designing a special market (to run in parallel with the official market and the junior market) for these companies with lighter reporting requirements and listing rules.

How will the eventual privatization of the BSE change the public’s view on the institution?

A private stock exchange will give its management flexibility in doing business. The public will be more confident to trade here. Local as well as foreign investors will see that things are moving forward in Lebanon. Hopefully, investors will also come back en masse to the country once the political situation is stabilized.

What have been the major transformations brought about by the CMA?

Currently, the CMA is in the process of updating and releasing new regulations. Up until now, the CMA released 20 regulations that govern financial markets, disclosure policy, crowdfunding, insider trading, derivatives, securitization, and collective investment schemes as well as regulations concerning financial institutions, brokerage firms, and the suitability of those selling financial products.

What are your expectations for the BSE in the following year?

The future of the BSE depends fully on the completion of the privatization process, since this will signal the true engagement of the financial sector. Once this process is implemented, I hope that Beirut recovers part of its former position as a leading financial capital market in the Middle East.