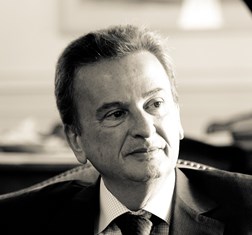 Born in 1950, Riad Salamé graduated with a degree in economics from the American University of Beirut. He has been the Governor of BDL since 1993, having been reappointed for three consecutive terms in 1999, 2005, and 2011. In this capacity, he chairs the BDL Central Council, the Higher Banking Commission, the AML/CFT Special Investigation Commission, and the Capital Markets Authority. Additionally, he is member of the Board of Governors at the IMF and the Arab Monetary Fund (AMF).

Share on:
Signs that Lebanon is in control of its finances will inspire greater confidence and bring more inflows to the country.

As governor of the central bank, how would you describe Lebanon’s economic situation in early 2019 relative to the previous two or three years?

If we look at the results of 2018, confidence remains strong in the financial sector because there was a 3.8% increase in the country’s deposit base compared to 2017. That was an important indicator, because Lebanon had political tensions in 2018 that caused a delay in the formation of the government. The banking sector grew its deposits by USD7.8 billion, and there was an acceptable balance of payments. It was also a year when interest rates rose globally, especially in emerging markets. Interest rates increased, though below what they should have been given our ratings by the various agencies. In 2019, the focus is on the government’s budget as ratings agencies downgraded Lebanon because they had doubts about the sustainability of funding due to the deficit being higher than it should be. The deficit compared to GDP in 2018 was at 11% but had been expected to be at or below 10%. The reduction of the deficit for 2019 is well emphasized in the budget of this year.

The passage of key reforms is crucial to Lebanon’s future. Which reforms will be the most important in the coming six months?

The new government received the confidence of almost the entire parliament based on the program it presented. It has several pillars to work on, namely reducing the budget deficit, fighting corruption, and implementing economic reforms using CEDRE funds from the April 2018 conference. The government’s priority is to fix the electricity sector, which represents the biggest share of its deficit. Reforms go along with political agreements and depending on the political agreements that are supposed to take place, we will be able to judge the efficiency of the implementation. However, the intentions have been publicly stated. If we were to see progress on electricity reforms in the next six months, this would send a positive note to the country and would effectively be the beginning of a structural reform in the budget. This would be the first time in many years because the deficit has been increasing steadily for the last 10 years at least.

If the reforms come to pass, would BDL’s current toolbox of unconventional policies, which have some attendant costs, remain?

The Lebanese Central Bank, like other central banks around the world, has a mandate to ensure stability. Based on this mandate, the central bank has worked, often by anticipation, to maintain a high level of reserves. That has proven to be the right approach because of Lebanon’s political—and therefore economic and social—volatility. This is especially true with the Syrian war and its implications for Lebanon in terms of the high number of refugees, the economic slowdown, and the resulting difficulties in exporting and attracting consumers from the Gulf. Given this atmosphere, BDL has continuously introduced tools to fulfill its objective. The central bank will shift to a conventional approach when it feels things are in order. That will be determined when it sees what happens with the budget deficit on the one side and with the implementation of CEDRE on the other, because if we want a productive economy, we need infrastructure.

What is your outlook for BDL and the broader economy for 2019?

We cannot predict an outlook given the volatility of the region. However, there are certain pillars on which one can rely. The first is that Lebanon has shown resiliency because the country has lived through wars and internal security issues and has continued to perform despite all that. Any good news could trigger more growth in the country. We are not in control of what might happen in the region that could affect us, though if things in the region improve, Lebanon will be in a better situation economically.