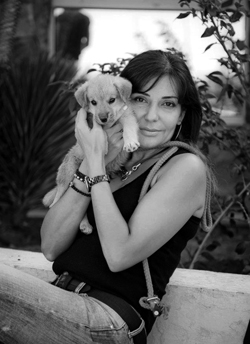 Share on:
What does your company do to help animals? This is a non-profit organization. To put it simply, we pick up stray or homeless cats and dogs and bring them here. […]

What does your company do to help animals?

This is a non-profit organization. To put it simply, we pick up stray or homeless cats and dogs and bring them here. We treat them, feed them, clean them, and make sure they are vaccinated and sterilized if they are in a healthy condition. Then, we try to find them homes. First we rescue them from the streets, then we try to get them adopted so that, ideally, they find a home. That is our main function.

How do you make people aware of the adoption process?

We started by launching campaigns because we were just getting ready. We are very new, and we have recently moved since someone donated some land to Vefali Dostlar. Starting in January 2013, we are working with a very good company that does our marketing and advertising in order to give us exposure. They know who we are, what we do, and what our aim is. Our aim is to control the population of stray animals on the streets of Azerbaijan.

Do you work with government organizations?

Not at the moment. We have not had any government support so far, but we have not approached it either. We wanted to do everything and invest ourselves in this project and show it that we really mean to do just charity here. We are hoping that when we are more exposed and people know about us the government will take our hand, not just in financial ways, but in legal ways; in the way of legislating some animal laws, such as laws against animal cruelty, because animal rights are very weak at the moment. We hope to foster a culture of animal loving within children. We are also hoping to have school groups visit us in the future so the children can see animals and be able to touch them, love them, and learn that animals are precious.

“We hope to foster a culture of animal loving within children.”

What are you doing to reduce the number of stray animals in the long term?

We have a program called “spay and neuter,” which every shelter in the world does. It is the most important thing a shelter does. We sterilize these animals so they can’t reproduce on the streets and the population is controlled. That is the first thing. We do it ourselves, and we do it free of charge for anyone who brings their animals here, pets or strays.

What are the current attitudes toward pets in Azerbaijan?

I have lived in Azerbaijan for 20 years, and in the past four or five years I have started to see more pets, especially small dogs. This trend is definitely growing. About 20 years ago, no one had a dog unless they had a large garden or they had a guard dog. Now, I see people in the city with tiny dogs, and that is good; it is animal loving. It is a trend with little dogs, but it is better than before, at least they are learning to live with animals and be kind to them. Even if it is a trend, it is an improvement.

What advice would you give to the general public when it comes to taking care of animals on the streets?

When you are walking or driving in the street, look around and you will see a kitten that is cold or a puppy that is hungry. For us to solve this problem, we must sterilize our animals so they don’t reproduce unwanted offspring. Sterilize your animals and be kind to them. They are kind, innocent, and they won’t hurt us unless we hurt them.

How would you evaluate the changes in Azerbaijan over the last 10 years during President Ilham Aliyev’s tenure?

Honestly, I have seen so much change in Azerbaijan. Each year has progressed more toward becoming better than a European country. The level of progress has been so fast and the culture has changed so much. The way people think, dress, and act are completely different. The progress in this country is unbelievable. Every time I take a trip and come back, I see the city has developed further. I hope that with this rate of progress, Azerbaijan will go forward and be better than every other country. We are moving toward becoming the Paris of the Caucasus.