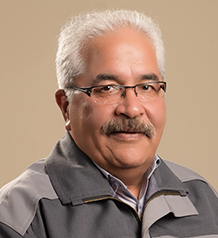 Managing Director & Member of the Board, Golgohar Mining & Industrial Co.

Naser Taghizadeh is the Managing Director and member of the board of Golgohar Mining & Industrial Company. Prior to that, Taghizadeh was the Managing Director of Bonab Steel Industry Complex and the National Iranian Copper Industries (NICICO) and Project Manager of the Khalij e Fars Alumina Project. He holds a bachelor of mechanical engineering from Kerman University.

Share on:
TBY talks to Naser Taghizadeh, Managing Director & Member of the Board of Golgohar Mining & Industrial Co., on the company's upcoming projects, its global strategy, and cooperating with foreign companies.

What are Golgohar’s current amibitions for the industrial and mining sectors?

There are more than 1 billion tons of iron ore to be exploited in Golgohar mines. We believe that by exploring new areas we can increase this quantity, and, thus, are negotiating with the Ministry of Industry, Mine, and Trade to extend our explorations area. We expect to produce more than 16 million tons of iron products this year based on the Persian calendar. At the moment, we produce 5 million-ton of iron plates, and in the middle of the year we will start a new 5 million tons line. At the same time, we are developing a new line of direct reduction iron (DRI) to produce 2.5 million tons. At the end of the year, we will have increased iron production by 68%. Our melt shop is also under construction and will produce 1 million tons of steel billets by the end of next year. Furthermore, we will finalize our contract for producing 3 million tons of thin slabs with one of the most reputable companies in the European market. We also have a power plant with a capacity of 500 MW to supply energy for our factories. Last but not least, we are currently conducting one the largest projects in Iran, which consists of carrying water from the Persian Gulf to dry areas in the south of Iran. This project is a joint venture with the National Iranian Copper Industries (NICICO) and Chadormalu Mining & Industrial Company. The first phase of this 300km-pipeline project has been completed with the construction of the first 120km.

Which markets do you target for exporting your products?

The main customer of iron concentrate is China, whereas the best markets for Direct-reduced iron (DRI) are Europe and Turkey. That is why after the lifting of sanctions we seek to cooperate with European firms. We also have a great relationship with Persian Gulf countries such as Oman, where we have recently opened an office. The most important project to increase our exports consists of developing a railway system to transport our products from Golgohar to Bandar Abbas port. After the visit of President Hassan Rouhani to the mines earlier this year, we signed an agreement with Railways of Iran (RAI) to start a 200km-railway project between Sirjan and Kerman, which will connect Bandar Abbas to this area. We can proudly say we are the first private company conducting a railway project in Iran. For this purpose, we have established a company that has already bought 10 locomotives. We are looking for joint ventures to finance this railway project.

Is developing projects outside of Iran also part of your company’s strategy?

We are ready to develop mine projects in Afghanistan. In fact, we started negotiating with the Afghan government and held a meeting in Iran. We are studying the mines located near the borders of both countries, which is also a great area for transportation. We will visit the mines soon for further discussions. Moreover, we bought a copper mine in Kazakhstan, which is now under development to produce copper.

How do you assess your appeal in attracting foreign investment into the iron ore chain?

We are eager to cooperate with foreign companies in the iron and steel production chains. The iron market globally has decreased; therefore, we have to make sure that everything is under control in order to remain profitable for our shareholders’ benefits. For this reason, we have been increasing production in our factories and we had a successful commissioning in our last projects.