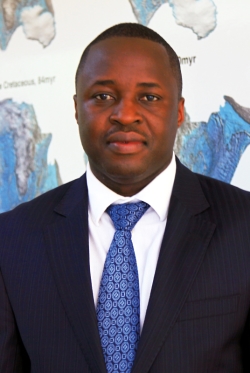 Nelson Ocuane was born in Maputo in 1970, and he graduated from Mondlane University after studying Geology and specializing in Petroleum Geology. From 2005 to 2007 he was an Executive Board Member for the National Petroleum Institute of Mozambique. In 2007, he was appointed as Chairman & CEO of ENH, and he is also a Non-Executive Member of the Matola Gas Company (MGC). Throughout his career he has often been a part of various committees in the oil and gas sector as well as organizing the Oil and Gas Trade and Finance Conference in 2005 and the Colloquium of African Geology in 2006.

Share on:
Energy firms are expected to spend $50 million in Mozambique over the next decade to help develop LNG. What role will National Oil Company of Mozambique (ENH) play in this? […]

Energy firms are expected to spend $50 million in Mozambique over the next decade to help develop LNG. What role will National Oil Company of Mozambique (ENH) play in this?

ENH is the national oil company, so we have the leading role when it comes to the development of the business in Mozambique. We work in conjunction with international oil companies. In most of our agreements, we have shares from 10% to 12%. We understand the Mozambican business environment, we have all the data, and we understand the geological potential of the country as well as what the actual needs are. In that respect, we bring something valid to any partnership. Our main role here is to make sure that the project happens on time to enable us to capture the market that can pay the prime price. We have to capture the prime markets, including the Far East and other Asian and Pacific markets. We also play an important role in the service area, which involves Mozambican entrepreneurs. We ensure that local involvement in no ways adds cost to the project and does not bring poorer quality to the services rendered. We act as an interface between the international oil companies and local entrepreneurs when it comes to services. We will also play a very important role in maintaining an equilibrium when it comes to supply and demand internally versus exports. We are working to ensure that labor-intensive downstream projects contribute to the sustainable development of the country, because you need projects that aid the need for natural resources, while also recognizing that these resources will not last forever.

You have gone on record saying that ENH may take anything up to 40% and assume the operational control of blocks. Do you see that for the new tenders that are coming through in 2013?

ENH has been an operator before. All of the appraisal work at the Pande and Temane onshore gas project and reserve certification was carried out by ENH. We have a short-term outlook when it comes to oil operations. That means being engaged in onshore projects. We will be the operator of fields that have either been relinquished by other companies or have a high potential. In the long run, we have to build our balance sheet. The Pande and Temane project is the only one that is on stream now, so the revenues out of that will lead to a situation where we can move offshore and be in a better, more ambitious position. It is most important to have a long-term vision. In the short term, we will become an operator, and in the long term we will build sustainability and competence. We need to build our balance sheet in a way that we can reinvest the proceeds of the projects we have.

The Pande and Temane project now supplies gas directly to the Mozambican market. Which other areas onshore are most exciting for ENH, and what are you anticipating in terms of exploration discoveries for natural gas?

We have two projects that we are looking at now onshore. One is the PSA area, and the other one is the Mazenga block, which is under discussion with the government. Then, there is Buzi, of which we own 25%. When we become operators, we will start from those blocks and go from there.

To what extent will ENH have a more active presence in downstream operations?

Our role downstream is mostly either as a promoter or as a shareholder. But our focus is not downstream as we are an upstream company, so we will focus on that. However, we will always get involved to make sure that the downstream sector comes along as well. We have to forge partnerships. One, which began in 1990, is in Inhambane Province. The electricity that supplies those districts is sourced from that natural gas, and then we supply gas to EDM and then EDM supplies electricity. Apart from that, we supply gas to households. We cover around 300,000 houses and hope to boost that to 600,000 in 2013. Each year we draw up plans to try and increase the number of people who use natural gas. It is cheap and if wages do not increase then people are offered cheaper rates, which is a huge benefit. The other project that we also brought in was the Maputo Project, which is a ring pipeline project from Matola to Maputo, and the second stage is to bring gas into houses.

Are there any other areas that ENH would be moving into to synergize with public companies?

ENH has a logistics area, and we are discussing a possible partnership with Mozambique Ports and Railways (CFM) to build and operate a maritime social service to supply services to the oil industry. The logistics side of the business is very important for us, and its development will be important for Mozambique’s oil entrepreneurs.

What levels of investment will ENH commit to for the logistics project with CFM?

The project could be valued up to $400 million, but that has to be looked at over two stages. We are now collecting information from oil companies on what they need. We will first invest between $50 million and $100 million and that will be enough for one or two years. We will then boost investment later on if needed.

Where is the geographical focus of the project?

We will focus on Pemba and Palma because this way the major development will happen in the next five to 10 years. However, if the area of focus changes then we will adapt as our intention is to service the industry. We need companies to focus on their core business instead of spending time developing logistics operations. We will try to play our role in this respect and promote Mozambique on that side as well.

What is your forecast for international interest in the new tenders on offer in 2013 given the fierce bidding war between Shell and PTT over Cove Energy’s share in 2012?

In some areas, I am quite sure there will be quite a lot of competition and good deals will come. I think it can be done. When we went for the tender in 2005, the Ravuma block was only one block and then it was split into seven. That boosted competition and increased the amount of activity. You cannot make discoveries without hard work. The government will give priority to those companies that are planning to do a lot of work in the first few years, as some firms will take their time.

What are your expectations on finding commercial amounts of oil?

If we find oil, that would be great, but if we find gas, we will not complain. Nowadays, gas is also a good commodity to have, either for internal use or export. We cannot talk specifics yet, as all we can mention is possibilities. Until you drill and discover something, it’s all just statistics.