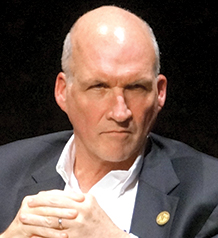 Surse Pierpoint has worked in the private sector for 30 years. In 2014 he was appointed Free Zone manager. His entire professional career has been dedicated to the Free Zone.

Share on:
TBY talks to Surse Pierpoint, General Manager of Zona Libre de Colón, on managing a major free zone, FTAs, and expansion of activities in the city.

The incentive of having a special economic zone that is considered extraterritorial from the country is tax-free transit. It is similar to other special economic zones; however, our unique characteristic is that we are located in close proximity to the Panama Canal and the vast volume of traffic it generates.

How is the free trade zone contributing to the development of the country?

We currently face certain difficulty in our dealings with Venezuela and Colombia. Panama, meanwhile, has become a hub, not just due to the canal, but also due to Copa Airlines and the fact it is a tourist destination for shoppers. Panama has been able to leverage the free zone across a range of sectors, which makes it such an attractive proposition. Free zone companies generally supply local stores and malls.

What opportunities are presented for the retail sector by Panama’s new free trade agreements? What are the main trends in the sector?

What we see is the increasing use of the airport and the malls, and improvements in logistical capacity. KLM Air France and Iberia now offer direct flights to Panama, and Lufthansa will be offering the route shortly. Improvements in transport links makes shopping trips to Panama easily accessible. What better place than the free trade zone to be able to supply that demand. The trends are moving towards luxury shopping. Many of the free zone traders, whose sales decline in Venezuela and Colombia, establish shopping centers in Panama. Products in Panama are gaining popularity because of the more cheaper prices.

Is there any specific geographical area that you are targeting to expand your operations?

It is very difficult to replace countries such as Venezuela and Colombia who have over 30 million inhabitants. Other countries like Mexico and Brazil have their own difficulties with regards to imports. They are semi-closed economies. Difficulties arise due to non-tariff barriers when exporting to those countries. The challenge is to be able to wait out the situation with Venezuela and Colombia by leveraging our position as a shopping destination.

What kind of incentives do you offer companies to open shop here?

We provide the traditional incentives people have in free trade zones. Panama has a territorial view towards profit, so profits on sales outside of Panama are tax-free. There is a logistical advantage because of the fact that we are right next to the canal and a fiscal advantage because of Panama’s treatment of tax on extraterritorial profits. That is the message. It is not anything special that nobody else has. However, many MNC’s are unaware of our message.

How will the expansion of activities in the free trade zone affect and benefit the city of Colón?

One of the things that the new president has focused on is Colón. I see an opportunity in the near future, certainly this year, to establish the benefits that we have here into the city. If you imagine Casco Viejo in Panama City combined with Albrook Mall, a combination of a beautiful architectural city with the offer of a sophisticated mall. Colón in fact has more beautiful architecture present, though spanning across a wider area. This could be another retail outlet opportunity for the free zone traders who currently are in Panama, as well as other areas in Central America and the Caribbean. What we are hoping to do with Colón Puerto Libre is establish a public-private partnership. It is hoped the government will create incentives that attract risk capital from investors wanting to take advantage of the opportunity to recreate the city and restore it to its former glory.

What are your main targets for this year?

We are supporting the central government with its project to create 5,000 houses for low-income families, having donated a plot of land for the development. The government is regenerating the city for these low-income families. Curundu, for example, was a slum with raw sewage running through the streets and today it is a thriving low-income housing community where crime rates have declined. This project is coupled with Colón Puerto Libre. We want to bring the prosperity that is in the free zone into the city.