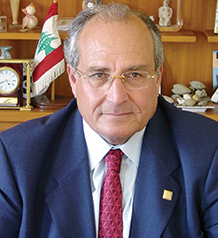 Chairman of Commercial Insurance & President of the Association, Insurance Companies

Max Zaccar received a degree in electronic engineering from Institut Superieur d’Electronique de Paris and has been Chairman and General Manager of Commercial Insurance since 1971. He also managed the Saudi Arabia branch of Commercial Insurance from 1974-1993. He is a member of several associations, including the Institut Technique Franco-Libanais, Oum El Nour, and the National Establishment for the Compulsory Motor Insurance in Lebanon. Zaccar has been a member of the board of ACAL since 1978 and was elected President in 2015.

Share on:
TBY talks to Max R. Zaccar, Chairman of Commercial Insurance & President of the Association of Insurance Companies, on the resilience of the sector, increasing the already-high penetration rates in the country, and remaining one of the strongest insurance companies in the region.

What are the assets that make Lebanese insurance companies strong in the MENA region?

Lebanese companies have a great deal of experience with wars, conflicts, and tough conditions; therefore, we understand other areas going through such difficult situations, be it Iraq, Syria, North Africa, Egypt, and the like. We have the connections, the resources, the expertise, and the kind of experience and appetite for those countries, not to mention the know-how to navigate rough waters where other companies may not see any potential or have appetite for risk.

Lebanon is facing economic adversities, yet the insurance sector remains strong and sound. What are the factors that account for that?

All industries have been hit by the situation, but they are all adapting well to the circumstances. Take the hotel industry, for instance. Hotels had an occupation rate of 54% last year, despite all the problems, and today it ranks fourth in the MENA region. The Lebanese economy remains vibrant in spite of everything; people are out on the streets consuming and spending, and the country still represents a gateway to the region for many companies. For the insurance industry, 2015 represented a growth of 2.5% in non-life insurance and 6% in life insurance, with an average of 3.5%, which we consider low but still positive. We are now leading the industry in new endeavors to overcome its challenges.

Lebanon has the highest life insurance penetration in the region, but it has the potential to be even higher. How can this rate be increased?

We have made some progress in this regard after the implementation of compulsory insurances by governmental decision. Now Lebanon has compulsory insurance for an extended variety of things. This move has also been embraced by banks, which ask people to be covered in terms of fire, life, and car insurance, among others, before granting any loan. The most important part is that people are realizing the benefits of insurance coverage and they are moving in the right direction. Something that we can also develop in the near future is life insurance and pensions, since the awareness of people has increased and premium prices are also going down. Now, it will fall on the new generation to evaluate and promote the value of having life and pension insurance coverage.

What is the history of Commercial over the last 50 years, and how has it evolved in Lebanon?

Commercial is a third-generation business that my father started in 1961 after he spent some time working in the insurance sector in Egypt. When he came back, he had good connections here in Lebanon and also with the insurance market in London, so he started his first contracts in marine insurance covering fruit and cigar exports. As he expanded his vision in the sector, he hired a group of professional brokers and set up one of the first insurance companies to operate in Lebanon. We faced difficult times during the Civil War, which ultimately led to the near end of the company in 1978 after our office was destroyed. Nevertheless, being good Lebanese, we proved resilient, and here we are 40 years later as one of the most competitive insurance companies in the country.

How has Commercial Insurance remained strong throughout the tumultuous times Lebanon has faced?

We have been through many things for over 55 years; however, we have always remained loyal to our clients, and they have been loyal to us in return. This client-company relationship has given us a great reputation that neither time nor conflict can diminish. The Lebanese people know that we stand by them. We also focus on niche products. Health insurance and motor insurance make up about 60% of our portfolio. We are also expanding again; we are moving abroad to start operations in Iraq and are planning to enter Iran soon. We have managed our relations and networks well, and that has kept us on the rise.