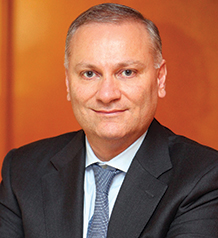 Saad Azhari has been the Chairman of BLOM Bank since 2008, and was the Vice Chairman and General Manager between 2001 and 2007. He also assumes several functions on the Board of Directors of BLOM BANK Group’s entities. He has also been the Vice President of the Association of Banks in Lebanon since 2001. Azhari joined BLOM BANK (Switzerland) in 1991, was appointed General Manager in 1997 and became Chairman in 2001. He worked from 1986 to 1991 in PBZ Privatbank, an affiliate of UBS Group in Zurich, from where he also ran the Bank’s operations in the Middle East and in its Hong Kong office. He obtained a Master’s in Computer Engineering and an MBA from the University of Michigan, Ann Arbor in the US.

Share on:
TBY talks to Saad Azhari, Chairman & General Manager of BLOM Bank, on increasing their market share and maintaining a strong regional presence amid the global financial crisis, the Arab Spring, and ongoing instability in Lebanon.

What factors lie behind BLOM’s success and what have been the major milestones for the bank over 2014?

Between 2007 and 2014, assets grew at a CAGR of 7.8% to reach $27.98 billion, and lending grew at 14.6% to reach $6.91 billion. We have also been remarkably profitable—profits grew during the same period at 8.4% to settle at $365.38 million; in addition, we have maintained a high ROAE, which stood at 15.8% at the end of 2014. It is noteworthy that this was all accomplished during the global financial crisis, the Arab Spring, and the ongoing instability in Lebanon.

One of the main accomplishments in 2014 was our investment in the three “knowledge economy” funds—Impact, Leap Investment I, and Berytech II—as part of Banque du Liban’s (BdL) directive 331. We also established a joint credit card with Beirut Traders’ Association (BTA) for small- and medium-sized traders, reaching more than 700 members so far in the prime shopping malls and zones of the country. Lastly, entry into the promising Iraqi market by opening a branch each in Baghdad and Erbil was a big achievement for us last year.

What steps is BLOM Bank taking to maintain its market share, and how does this strategy differ between markets?

We are constantly working on not just maintaining our market share but increasing it. We are the leading bank in Lebanon for retail lending—our retail lending increased between 2007 and 2014 at a CAGR of 24.9% to reach $2.7 billion—and we are at the forefront of introducing new products and services. In Jordan, we run a very successful retail operation, enjoying the highest growth rate in the banking sector there. In Egypt, we have solid business in retail, corporate, trade financing, and asset management; and we have just established a company to run our expanding Egyptian asset management services. In Saudi, our investment banking operation is very dynamic, and we have currently the fastest growing business in real estate funds. In the UAE, our trade finance and corporate activities are doing well and expanding, and in Qatar and Europe, we are working diligently to enhance our corporate and private banking operations.

What role does technology play at BLOM Bank and what innovative solutions have been recently implemented?

Technology gives banks a competitive edge in delivering accessible and up-to-date products. We have the unique e-Cash service that allows our customers to send money from anywhere in the world to individuals who can cash it at our ATM machines and do not have to be our clients. Our POS machines are also able to converting payments into the currency of their choice. All our tech-based services are highly secured and come with the utmost protection.

BLOM’s short- and long-term investment plans are always designed to maintain the strength of our balance sheet and the sustainability of our profits. Our major investments are: cash and central bank 36.9%; loans 25.3%; securities 25.1%; and interbank 10.1%. BLOM participated in BdL’s directive 331 initiative, investing $30 million in start-up funds to help shore up the “knowledge economy” sector in the country.

How has Islamic banking evolved in Lebanon over the past years and what was BLOM Development Bank’s role in its development?

Islamic banking remains a niche market in Lebanon mainly due to the predominance of conventional banking and the cultural and religious diversity of the country. BLOM Development Bank (BDB) has done fairly well in this limited market, experiencing double-digit growth rates in the past few years. BDB was the first Islamic bank in Lebanon to undertake sharia-compliant short- and long-term placements with BdL. It has launched debit cards and e-banking services, and was selected by The Banker as the “Best Islamic Bank in Lebanon for 2013.”

What is your assessment of Beirut’s potential to regain the role of a major banking center in the region?

Lebanon successfully played that role until the 1975 civil war, and the frequent skirmishes that followed since its culmination in 1990 have further weakened the position, especially considering the emergence of markets in Dubai and Bahrain. Lebanon could now develop as a center for the Arab Eastern Mediterranean region and Lebanese banks would play an increasingly influential role in the region as a whole.