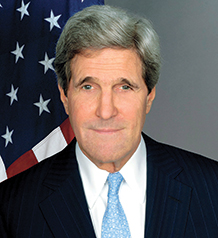 Secretary, State of the US

In February 2013, John Kerry was sworn in as the 68th Secretary of State of the United States, becoming the first sitting Senate Foreign Relations Committee Chairman to become Secretary in over a century. Shortly before he graduated from Yale University, Secretary Kerry enlisted to serve in the US Navy, and went on to serve two tours of duty, returning home from Vietnam with a Silver Star, a Bronze Star with Combat V, and three Purple Hearts. In 1976, Secretary Kerry received his law degree from Boston College Law School and went to work as a top prosecutor in Middlesex County, Massachusetts. He was elected Lieutenant Governor of Massachusetts in 1982, and two years later, he was elected to the US Senate where he served for 28 years.

Share on:
John Kerry, Secretary of State of the US, on the importance of education, combatting inequality, and protecting the environment.

In a rapidly changing world that is increasingly interconnected, education more so than ever before, is the ladder of opportunity. And that is why the expansion of educational opportunity has, from the beginning, been a central focus of the Summit of the Americas. It is why President Obama launched 100,000 Strong in the Americas to increase the number of young people from the region who are studying in the US, and the number of students from the US attending universities in the region. It is why, in Panama, President Varela launched the Panama Bilingue program, which sends more than a thousand school teachers annually to universities in the US and the UK for professional training. When we gathered in Panama City for the Seventh Summit, we found ourselves encouraged by the progress achieved. We also found ourselves determined to close existing gaps, and are today more aware than ever that we will either go forward together, or else fall behind together.

In country after country, the people of the Americas have strengthened their democracies and taken steps to ensure the fundamental freedoms of their citizens. And in many, democracy has brought not only freedom from fear, but also freedom from want. Over the past decade, the economies of Latin America and the Caribbean have grown at an annual rate of 4%. Incomes are rising, and the middle class is growing. Moreover, the gap between the rich and poor—though still far too wide—is narrowing faster than in any other region.
In our era, we wake each day to a new world. We have to move forward constantly just to keep pace. We also have to hold people in public office like myself accountable.

We all know that education is a lifelong process. And yet it has to begin in the earliest days, and correctly. Globally, one of the Millennium Development Goals has been to ensure that every child is able to attend primary school. Enormous progress has been made in that direction, and in our hemisphere, primary school attendance is now nearly universal.

At the 2009 Summit of the Americas, the US launched its Scholarships for Economic Growth program, which provided $50 million for 1,300 students from Latin America and the Caribbean to enable vocational training in the US. President Obama’s 100,000 Strong in the Americas initiative builds on that effort, and the results speak for themselves: Already, more than 72,000 students are coming to the US each year from Latin America and the Caribbean.

America is investing in cleaner alternatives. Since President Obama took office, the US has upped its wind energy production threefold. We have increased our solar energy generation more than tenfold. Our country has become smarter about the way we use energy in our homes and businesses. And all of these examples represent major steps.

Here in Panama, extreme weather events are creating cycles of flood and drought; events that are threatening the water supplies that enable the Panama Canal to operate effectively and generate electricity. Just a few years ago, due to a record storm, the canal had to close for the third time in its 100-year history, disrupting one of the world’s most important economic thoroughfares. In Peru, where I attended the climate change conference in December 2014, tropical glaciers and fisheries are under threat. The rise in sea levels contributes to the erosion of Puerto Rico’s coastline around Rincon. And coral reefs are at risk from warming waters and ocean acidification. The number of major hurricanes in the Atlantic basin has increased repeatedly, which damages tourism.

We can encourage governments, businesses, and consumers to rely less on costly fossil fuels. That means increased investment in mass transit systems, and in renewable energy sources such as solar, wind, geothermal, and sustainable hydro-power. We can push for the world’s highest standards in the environmental chapters of the trade agreements that some of us are pursuing, and that includes the Trans-Pacific Partnership (TPP), which will build prosperity throughout our hemisphere, based on shared principles and shared values. IT is not just a technical trade agreement. The agreement is a strategic opportunity for all, and an opportunity we need to seize.

So here at the dawn of the 21st century, at the seventh Summit of the Americas, I hope we will overcome stereotypes and not fall prey to cynicism, but rather make the most of this extraordinary period of innovation, entrepreneurial activity, and individual opportunity. And I have great faith in the Americas’ ability to lead the world in doing so.