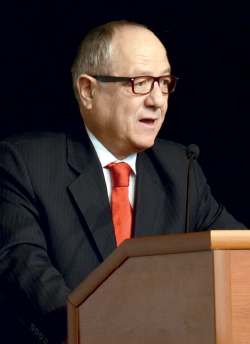 Halil Akıncı was born in 1945 in Turkey, and graduated from Ankara University’s Faculty of Political Sciences, Department of Foreign Relations. He served in different positions at the Ministry of Foreign Affairs, and between 1980 and 1980 worked at the NATO secretariat in Brussels as an Administrator dealing with the Soviet Union. He served in Moscow in different capacities as First Secretary, Minister Counselor, and on three occasions as Ambassador. In September 2010, he was appointed by the Presidents of Azerbaijan, Kazakhstan, Kyrgyzstan, and Turkey as the Secretary General of the Cooperation Council of Turkic Speaking States.

Share on:
How will the Cooperation Council of Turkic Speaking States (CCTS) further improve cooperation between Kazakhstan and other member states? The key agenda of the CCTS is economic cooperation as a […]

How will the Cooperation Council of Turkic Speaking States (CCTS) further improve cooperation between Kazakhstan and other member states?

The key agenda of the CCTS is economic cooperation as a locomotive for cooperation in other areas, and was the topic of the first summit, held on October 21, 2011 in Almaty. Upon the instructions issued by the respective heads of state, ministers and heads of diverse government authorities began to meet annually to discuss how to improve further collaboration. Under the CCTS initiative, economy ministers met in Astana in 2011. The ministers immediately established an operational mechanism—working groups in economic cooperation—with the aim of overcoming current obstacles in our economic relations and expanding through tangible projects with the participation of private-sector representatives. During the Almaty summit, the Turkic Business Council was established as the primary instrument for private sector cooperation among member states’ businesses, providing an institutional forum for discussion and the promotion of common activities. At the Bishkek summit, held in August 2012, the presidents of member states emphasized the importance of cooperation in transportation, and instructed the ministers of transportation and customs authorities to meet and discuss issues of interest, mainly the extension of the Baku-Tbilisi-Kars railway route across the Caspian Sea by ferry and via Kazakhstan to China. Meanwhile, tourism ministers for the first time decided to gather in Turkey in April 2014. There are also complementary organizations to the CCTS, such as the Turkic Academy located in Astana that will study Turkic history and language, and the Turkic Culture and Heritage Foundation based in Baku, which will focus on the preservation and development of cultural heritage across Turkic states. The CCTS operates as an umbrella organization for all other institutions such as Parliamentary Assembly of Turkic-Speaking Countries (TURKPA), International Organization of Turkic Culture (TURKSOY), and the Turkic Business Council.

How do you see the transport and logistics sector evolving in the medium term, and how will these projects benefit Kazakhstan’s economy?

Kazakhstan is developing essential national programs and has a clear strategy on transport and logistics expansion. In that respect, the CCTS supports the realization of the Silk Wind project, which aims to construct a high-speed, multimodal container transportation system for freight shipments between the countries of Europe, the Caucasus, and Asia. The integration of this project into CCTS transport projects is already underway and is on the agenda of the CCTS’ ministers of transportation. Indeed, the investment in land routes will be beneficial for passenger mobility and trade within the country itself. One of the conclusions reached at the World Economic Forum on Europe and Central Asia organized in Vienna in June 2011 was that opening a land route connecting the Pacific, China, and East Asia with Western Europe—the Silk Road—promises to cut transport times to less than one-quarter of their current stretch. Some countries along the route could increase their GDP by more than 40% as a result of increased business and services. The Silk Road used to be the Turkic Road, and it is essential that its restoration will serve the interests of our countries and regions, as well as rest of the world.

How will the CCTS support Kazakhstan in pursuing its Strategy-2050 goals?

Under the leadership of President Nursultan Nazarbayev, Kazakhstan has made tremendous achievements over the past 20 years. The Kazakhstan 2050 strategy covers ambitious plans and challenging tasks. But because of its achievements, the international community acknowledges Kazakhstan as an equal and reliable partner. Now, President Nazarbayev is setting a modernized political course for Kazakhstan in the 21st century that addresses the need to develop a modern transport and logistics infrastructure to boost economic growth, as well as international and domestic integration.