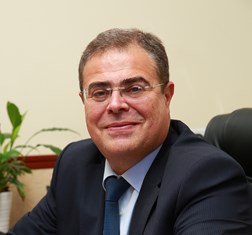 Elias Alouf is the General Manager of BSL BANK. Since joining the bank in 2016, he has focused on leveraging its solid and entrusted position to expand its retail banking and technological innovation, and achieved sizable growth in the bank’s major financial aggregates. He previously held senior positions in several prominent Lebanese banks and participated in several major M&A transactions. He is a graduate of Saint-Joseph University, HEC, and the University of London.

Share on:
Despite dismal movement in the overall market, BSL's deposits visibly grew thanks to the firm's expansion into the retail and commercial banking arenas.

Are you optimistic about the changes in the political situation in 2019?

The year 2018 was a difficult one for Lebanon. Now things have stabilized thanks to the formation of a new government, which gives us reason for hope. Nevertheless, this government will have a big task in tackling Lebanon’s difficult economic situation and undertaking the necessary reforms. The most important item to look at is the decrease in the dual budget and trade balance deficit. If one looks at the former, around 33% stems from the financing of the EDL. Similarly, looking at the latter, the major item we are importing is fuel. Reforming the electricity sector and its revenues would thus result in a significant reduction in both deficits. This would give us a balance we can live with until there are more reforms. The international community is asking Lebanon to proceed with its reforms, and then it will provide funding for infrastructure investment to boost economic growth, rather than giving us money before reforms, as happened in the past. Making aid accountable to the reforms undertaken instills a sense of ownership and value to the process of reformation and creates an incentive for politicians to act. I think that the trade balance presents the main challenge. Due to its large diaspora, Lebanon can also count on a large inflow of remittances. As long as there are dollars coming into the country and increasing the reserves at the central bank, Lebanon will stay afloat. We experienced problems over the last two years because we had a negative balance of payments, which is made up of our trade balance versus remittances from foreign workers and capital inflows. As long as capital inflows are larger than the trade deficit, you have a balance of payments surplus that will finance the government’s deficit in US dollars. But when you have a deficit in the balance of payments, dollars move out of the country.

Does BSL have a strategy to increase deposits?

In 2018, our loan base grew by more than 10% and our deposit base by more than 7%, even when the market barely grew. Our deposits’ growth stems from our expansion into the retail and commercial banking arenas. We brought on board several new young branch managers who are dynamic and technology savvy and launched several highly successful retail products (car loans, home loans, cards), which increased our customers’ base and allowed up-selling and cross-selling. We also invested heavily in technology by launching first-class personal and corporate online banking in addition to the implementation of a first-of-its-kind loyalty program ‘Moments,’ based on the idea that ‘every moment counts.’ This unique program doesn’t only depend on spending; almost every transaction done through our bank earns our customers ‘moments’ that can be redeemed in miles (on almost all airlines), hotel bookings, car rental, cash, or even household appliances.

What is BSL’s target client base?

Our target client base is the younger generation and older millennials, i.e. university graduates between 25 and 45 years old who are in charge of their lives. We have set up a range of products to specifically cater to this group. We have a very attractive housing loan, for example, in addition to a very good car loan. Importantly, while we are targeting this young generation, the base of our banking philosophy is to assist them in their basic banking needs without spoiling them. Banking is a social responsibility. We take a humane and honest approach to banking, with full disclosure and transparency, so our customers know exactly what they are paying for when they get a loan. Given these tough economic times, it is important that banks fulfill their social role.