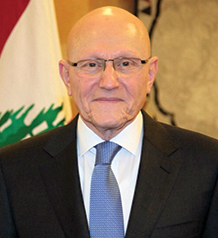 HE Tammam Salam has been Prime Minister of Lebanon since February 2014. Prior to that, he served in the government as Minister of Culture during 2008 and 2009. He is a graduate of the Haigazian University in Beirut and also holds an economics and management degree from the UK. He began his career as a businessman before entering the political arena at the beginning of the 1970s.

Share on:
HE Tammam Salam, Prime Minister of Lebanon, on relations with the Gulf and lessons learned from the year's elections.

In 2016, Lebanon welcomed a group of prominent businessmen, economists, and bankers to participate in the Arab Economic Forum that took place in our capital city. This was an opportunity to reconnect with our Arab brothers too and to welcome them to Lebanon, their second home. We had honorable guests from Egypt, Jordan, Sudan, Mauritania, and the Gulf nations, countries that are dear to Lebanon and who have supported us all along the way.

During the occasion, I also had the chance to greet the leaders of the Gulf Cooperation Council (GCC), led by the Custodian of the Two Holy Mosques King Salman bin Abdul Aziz, who is running a great developmental experience under the Economic Vision 2030 plan that will transform the Kingdom of Saudi Arabia and the entire region for the better. In Lebanon, we will be looking forward with great interest to the development of this quality journey, and we wish our Saudi brothers great success in this endeavor.

This year marks the unfortunate second anniversary of our presidential vacuum, which reflects a shameful deficit of political vision in our country and dissents into deep political divisions that hinder our internal and foreign interests. It is also an abuse to the Lebanese people who put their trust in us and want to see their interests protected. This prolonged dereliction is the fundamental reason for the paralysis of our institutions, and this has implied the stumbling of a large number of issues related to the direct and long-term needs of the Lebanese people. The presidential vacuum also reflects the worst possible picture of the country at a time of need to Lebanon and damages our image in front of investors, who wish for a stable political situation before deepening their connections with our nation. This fact is one of the main reasons for the lack of growth and the large decline in the economic activity, in addition, of course, to the externalities that have added up to the complex panorama Lebanon faces these days, the current tragic developments in Syria being the main effect of this.

But shedding an illuminated space amid these adverse times, the first municipal elections took place in Lebanon in May 2016, injecting life into the democratic practice that Lebanese people had long waited for. These elections, which we hope to achieve with the same smoothness and success in the upcoming three electoral positions, spread some spirit in the political life of the country and returned the Lebanese citizens their natural right to choose their representatives in managing public affairs. It also diminished the pretension that the Lebanese are unable to run elections in a peaceful and civilized manner. But, most importantly, the municipal elections proved that the Lebanese state, its institutions, and its security forces are able to manage and protect the most difficult and complex electoral challenges.

Moreover, the recent elections showed us that it is not impossible to build upon this achievement, to proceed toward other stations of the democratic practice in order to revive our political life, and to rebuild our constitutional structure with an immediate focus on the election of a President of the Republic. We can also reach a modern election law and move toward general elections that would regenerate the Parliament. It is not impossible either to deepen the current political dialogues, to agree on enhancing the current stability, and barricade Lebanon from the effects of the painful war that is occurring in Syria. We have long waited for Lebanon to return to the place where it should be, to become an ideal destination for investments, to become an exceptional oasis for business, and a unique platform for trade, industry, and banking.

Despite all the difficult internal situations and even more difficult external conditions, Lebanon maintains its well-established institutional structures and its long-standing democratic practice. We keep incentivizing investment regulations; we have an advanced and well-capitalized banking sector, a stable situation with security granted to our citizens, and a highly capable stock of human talent. These very same traits are the ones that qualify Lebanon to be the launching pad for the reconstruction process in neighboring Syria once all weapons fall silent, a day we hope will come soon and will reestablish peace once and for all.