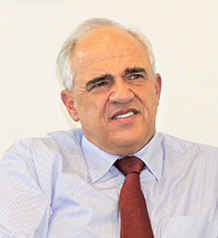 Ernesto Samper Pizano, the Secretary General of UNASUR, was President of Colombia from 1994 to 1998. He began his career as Congressman of Cundinamarca in 1982 to 1984, Councilor of Bogota from 1982 to 1986 and member of the Senate from 1986 to 1990. He studied Law in the Javeriana University of Colombia and later obtained a Master’s in Economics. He took several courses at the University of Columbia in New York and the ‘Nacional Financiera de Mexico’ in Mexico. In addition to his political career, Ernesto Samper has been a professor at a number of well-known universities and taught a range of different topics.

Share on:
TBY talks to Ernesto Samper Pizano, former Secretary General of the Union of South American Nations (UNASUR), on Ecuador's contributions to the organization.

In December 2014, the organization opened its new office in Ecuador. What is the importance of Ecuador hosting the headquarters of UNASUR?

This office will play a key role in regional integration and is located at an emblematic address—the equator of the world. Ours is a very young organization that brings together all political players of the region. Among the most important projects we handle is the convergence of all regional projects taking place, including Mercosur, the Pacific Alliance, and ALBA countries, among others

What are the main differences between the construction processes of the EU and UNASUR?

We start off from a different point of view; as a region, we have a common language and history, as well as a similar geography and conditions. We are the fourth largest economy in the world and we started building this on the common regional identity the countries in the region display. We have common regional projects within the infrastructure, connectivity, and institutionalization fields, among others.

The Banco del Sur aims to become the main financial institution in the region. At what stage of development is the bank today?

One of our main objectives is to financially strengthen the region through several tools such as the Andean Development Corporation, the Latin-American Reserve Fund, the Mercosur Infrastructure Fund, and the Southern Bank. This project has developed at a slow pace, but has already established its directory. I believe it will play a key role in leveraging the resources of the region.

In April 2015 UNASUR created the South American Defense School. How would you assess the new defense policies that UNASUR is keen to implement in the region through this school?

In April 2015 we established the South-American Defense School, which aims to achieve a higher level of regional security. We work towards common security and defense policies regarding several risks as climate change. We work to promote sustainability, and biodiversity as these are areas we must promote to ensure security. The curriculum is also concerned with civil security.

Ecuador has shown interest in developing a dispute-resolving body through UNASUR. How would you evaluate the development of this body?

The initiative has already achieved virtually 100% consensus. I would say that current dispute resolution mechanisms are obsolete and uniformly result in litigation. We have a completely different approach that instead prioritizes consensus.

After Ecuador recognized plans to reduce medicine prices by 30%, to what extent could the nation serve as an example for the region in promoting healthcare access?

We have three ongoing projects where it concerns access to healthcare and medication, for we understand of the need the region and its people have. Today 30% of health expenditure among people in the region derives from medicaments. We, for example, conduct market research to show people how much they would be charged for the same prescription in selected countries; in some cases, this can be up to 10 times more. In this context, our main objectives in this field are transparency, a map where generic drugs can be produced. We also applaud Ecuador’s proactive attitude when it comes to food labeling and are keen for other countries to adopt the same measures. The main policies in the regional healthcare sphere today target childhood obesity, cancer, medicaments, and CNCDs.

How would you assess Ecuador’s contribution to UNASUR?

All countries highly contribute to UNASUR and all the organization’s arms. Ecuador is no exception to this. For example, Ecuador is poised to pass legislation regarding its citizens’ right to mobility in the region, and vice versa. Ecuador also positively contributes to UNASUR in fields such as infrastructure, new technologies, and education, for example. And meanwhile, the City of Knowledge Ecuador is a hugely interesting project that could yet serve as a template for other countries in the region. It is a prime example of the innovative drive of the nation.