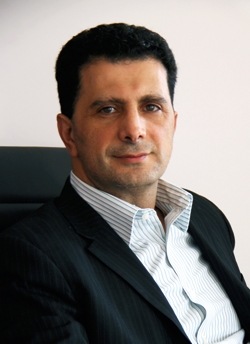 Coasting on a Dream

In addition to serving as Member of the Iranian Motorcycling and Automobile Federation Board of Directors from 1996-2002, S. J. Mousavi is one of the founders and investors of Iranian Land, a new entertainment and residential town. He is also the founder and investor of Parand International Karting Complex and Azadi International Karting Complex. He is currently President of TSI Group.

Share on:
You are building the “perfect city.” What is the aim behind this project? Iran is a country of 80 million people. We have a very young population, and after the […]

You are building the “perfect city.” What is the aim behind this project?

Iran is a country of 80 million people. We have a very young population, and after the Imposed War in the 1980s, it has undergone an industrial and economic reconstruction process. During this time, leisure was not a priority. We are now trying to create a new lifestyle for people. A large country like Iran needs more residential housing, sports and leisure complexes, and commercial activities. We are trying to create a destination outside of Tehran. Currently, most people go to the UAE, the Far East, or Turkey. We are therefore working to create an alternative, domestic destination. Iran’s population has almost doubled over recent decades, going from 36 million to nearly 80 million people. This has created certain opportunities and implications. The implications are that urban design has lost its way. People used to live in larger houses, and now they live in apartments. This makes it difficult to develop a new town, but that’s what we are doing. It will be built to very high standards and attract many residents. The government is also on board in terms of creating new towns, and four are being created outside of Tehran at the moment. The problem with these new towns is that there is no work there and residents are forced to commute to the bigger cities. Through the design of our international consultants, we created a model and a destination where a new type of living exists that includes leisure, work, and commercial activities. By binding all of these aspects together we meet the needs of all kinds of people and families. In terms of creating this space, the Iranian Cabinet of Ministers has approved it as an international leisure zone. In terms of creating work, we have been approved by the parliament to be the closest special economic zone to Tehran, the capital of Iran. We also have subdivisions that involve education, health, and sports.

How will you avoid import/export limitations within the project’s special economic zone?

Our imports and exports will be mostly automobile oriented, although we can import and export everything else. We would like to create an area of free activity for Iranians. According to the law, new and even used foreign cars can be introduced into Iran through a special economic zone with almost no restrictions. This allows you to buy a Porsche at a cheaper rate than in the rest of the country. That is an advantage, and that is why we’ve designated all 1,400 hectares of the land as a special economic zone. Up until now, two automotive manufacturers have approached us. They are interested in this special economic zone since it is the closest free zone to Tehran, which is home to the largest automobile market in the country.

How much is the average Iranian willing to spend on leisure?

Almost 7 million Iranians traveled internationally in 2009, an increase of 130% on the previous year. We expect this number to increase to 9 million or 10 million in 2012. If every person leaving the country spends $1,000, then overall spending totals over $10 billion. This does not include domestic trips, so the potential for leisure spending is remarkable.

TSI has many projects outside the country. How is this project different from your previous ones?

We have 30 different sub-projects ongoing at our current project, and nowhere else in the world have they all been combined. At the project’s fun park, there will be a 95-meter high rollercoaster, making it among the highest in the world. This alone will attract people in the region as well as from abroad. We will also have a water park. People are currently going to a water park in Dubai, which is only 3.5 hectares in size. Our water park will cover 12 hectares, which is a totally different scale. Our aim is to create a domestic and international attraction. Then we will have a golf course, which will be the biggest in the country. We plan to change a portion of the river passing by the site of the project into a 100-hectare manmade lake and build villas on the waterfront, overlooking this lake.

Furthermore, we have developed our healthcare offering. In Iran, health care is affordable and Iranian doctors are among the best in the world. Dentistry is highly advanced and Iran has the potential to become a medical tourism destination. The government has eased the process of developing these platforms as it sees the potential for high returns on investment thanks to the tourism potential the country possesses. As an investor who has made many investments abroad, it is nice to know that this investment is secure. However, it won’t all come together at once, and through many different phases the project will be complete in just under 10 years. By the end of the Iranian calendar year, we will have finished part of the golf course and the villas overlooking that golf area. Each project that I mentioned is a different investment within this large city; different companies operating on different projects.

What opportunities do you see for foreign investors in tourism and leisure in Iran?

As an Iranian investor, I have done business in many countries. When I work on a project in Iran, it is not because this is my home country, but because the return on investment (ROI) here is higher than anywhere else. In this project, our feasibility studies show an ROI of up to 50%. As master developer, our responsibility is to gather investors together. It was not easy to get involved. We have created a space in which all developers, whether international or domestic, can come in, start to invest, and put their expertise to use. We invite any developers or investors to come in and take part in the project because it has excellent potential. The government also helps in this process. The Ministry of Finance guarantees a yearly 10% ROI for any capital brought here by a foreign investor.