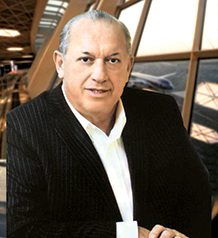 Jahangir Askerov was born in Baku in 1950, studied Civil Aviation, and later graduated as an Engineer-Pilot from the Leningrad Civil Aviation Academy in 1980. He has had a long and successful career in aviation, and is currently the President of AZAL.

The First European Games is a landmark occasion for Azerbaijan and it is anticipated to be the first of many major national events. How has AZAL prepared for the Games so far, and what strategies have been put in place to support the event?

The first European Games is an outstanding event that Azerbaijan is rightly proud of. Thanks to the efforts of the country’s leadership and personally President of the Republic Ilham Aliyev, today Azerbaijan has the capacity to conduct such global events at the highest level. This puts tremendous responsibility on AZAL, the official carrier of this important event. The first thing a passenger coming into the country sees is the airport. It is a gateway of the state and Heydar Aliyev International Airport is the main air harbor in Azerbaijan.

I am sure that the new terminal of the Baku airport, equipped with the most advanced air navigation facilities, contemporary design, and a host of amenities for passengers, will impress any visitor of the Games. As a matter of fact, the new terminal of the airport has recently received a high assessment in the SkyTrax international audit, the status of a four-star airport, which is on a par with such recognized international air hubs as London’s Heathrow, Schiphol in Amsterdam, Beijing, Frankfurt, Abu Dhabi, Zurich, and other airports. However, we will not rest on our laurels and will do everything possible to obtain the highest status of a five-star airport, which has thus far been awarded to just five airports in the world. For visitors choosing the national carrier to come to our country, familiarization with the traditional Azerbaijani hospitality and culture begins well before landing in Baku. I am talking about the passengers who will use the services of AZAL. It operates flights to many countries participating in the Games: the UK, the Czech Republic, France, Italy, Turkey, and Russia, for example. In May 2015, we are opening flights to two new destinations: Berlin and Barcelona. Therefore, many athletes and guests of the Games will be able to take our flights—agreements have already been reached with the National Olympic Committees of France, Italy, and others on the transportation of national teams of these countries by AZAL. In addition, the number of flights to some European countries will be increased in the run-up to the First European Games.

The new Boeing 787-8 Dreamliner Plane was added to AZAL’s fleet, the first of its kind in CIS countries. How does a modernization of the air fleet support AZAL’s overall objectives?

It is a wonderful airplane, the pride of modern aviation, and we are extremely pleased that Azerbaijan was the first CIS country to take this type of aircraft into the fleet of the national carrier. The first Dreamliner acquired by the AZAL arrived in the capital of Azerbaijan on December 24th, 2014. In anticipation of this event, many local media published the characteristics of this aircraft. The range of 15,700km allows it to carry out long-haul flights lasting more than 15 hours. It has 210 passenger seats, including 18 business-class, 35 premium class, and 157 economy class seats. The aircraft is based on the most advanced achievements in the field of aircraft design and is noted for extensive use of composite materials, which makes it different from its predecessors by higher cost efficiency both in terms of ground handling and fuel consumption. The Boeing 787 has already been put into service and operates scheduled passenger flights to Istanbul and London. In the near future it will begin to carry out flights in Beijing. The appearance of this type of aircraft in the fleet of the national carrier of Azerbaijan represents yet another stage in the renewal of its aircraft which is carried out on behalf of and under the guidance of the President of Azerbaijan.

AZAL has recently cooperated with Turkish Airlines. How significant is the airline’s presence in the region as a result?

The signing of a code-share agreement with the national carrier of fraternal Turkey is a landmark event in AZAL’s commercial policy. The agreement has been a long time coming, and finally we have managed to find a format, which should be beneficial to all parties—airlines and passengers alike. The agreement covers all flights between Turkey and Azerbaijan carried out by Turkish Airlines and AZAL. This allows us tremendous flexibility in terms of schedules and connections when planning the itinerary for our passengers. For example, whereas earlier each airline could offer only four to five flights per day for traveling from Istanbul to Baku and back, now the number has reached a total of nine for each carrier.

We have significantly increased the capacity of connecting to destinations included on the route network of both airlines outside of Baku and Istanbul. We have enhanced the possibility of registering passengers and their baggage all the way to the final destination when implementing joint flights by Turkish Airlines and Azerbaijan Airlines. As a result of this agreement, AZAL has gained access to an extended network of routes within Turkey, which are popular in Azerbaijan. Turkish Airlines, in turn, now has the ability to use AZAL’s extensive agent network of air traffic on the territory of Azerbaijan.

What have been major impacts of first transatlantic flight from Baku to New York on the air travel industry in Azerbaijan and region?

Azerbaijan is the only country in the region to operate direct and non-stop passenger flights to the US. This achievement is underpinned by the hard work of many services and departments of Azerbaijan’s Civil Aviation, which was carried out over the past several years. An audit by the US Federal Aviation Administration awarded the Civil Aviation Administration of Azerbaijan the highest first category, giving it the right to carry out flights to the US. The first such flight was carried out on September 24th, 2014.

It was implemented by the comfortable Airbus A-340, which was specifically bought for this purpose. AZAL has connected the continents; thus, opening a new chapter in the history of civil aviation of Azerbaijan. Unfortunately, direct passenger traffic between Baku and New York is not sufficient to fill the free passenger capacity, although the opening of a direct flight does stimulate the emergence of a new segment for this market; however, New York flights are perfectly integrated into other AZAL destinations—Tehran, Tbilisi, Tel Aviv, and Aktau, and most of the passengers on the flight now are transfer ones. A special role in this is played by the new terminal of Heydar Aliyev International Airport, where transfer passengers are provided with a high level of comfort and service when changing flights. Thus, AZAL has made a confident step toward asserting Baku as an air transport hub of continental importance. Direct non-stop flights to New York are an important event in the modern history of AZAL and mark the transition to a new and qualitatively higher level of development.