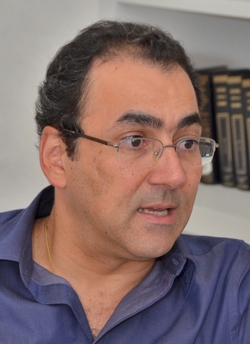 Sergio Dí­az Granados is a Law graduate from the External University of Colombia and also studied Public Management at the University of Alcala in Spain and the Inter-American Institute for Economic and Social Development in the US. In addition, he completed higher studies in Constitutional Law at the University of Salamanca. He began his political career in 1997 and worked with Juan Manuel Santos, then Minister of Finance, in 2000. Having occupied several public positions, he is currently the Minister of Trade, Industry, and Tourism.

Share on:
What are the advantages of the recently signed free trade agreements (FTAs) with the US and EU for Colombia? The signing of the FTA with the US, which took effect […]

What are the advantages of the recently signed free trade agreements (FTAs) with the US and EU for Colombia?

The signing of the FTA with the US, which took effect in May 2011, and the agreement with the EU, which we expect to enter into force in 2013, are both milestones in the history of our foreign trade. These are our main economic partners, and they are two of the most dynamic economies in the world. They represent great opportunities for our exporters of goods and services. As a result of the FTA with the US, expectations point to the creation of 500,000 new jobs and, based on quantitative studies, an increase in GDP of between 0.5% and 1%. It is also projected that in the five years following the implementation of the agreement, the economy will grow an extra percentage point and unemployment will be lowered by two points. As for the EU, we will be able to access 27 countries, with over 503 million inhabitants and an average consumption per capita of $34,000, which is four times that of Colombia. This gives an idea as to the EU’s purchasing power. Trade, FDI, and tourism with the EU and the US have shown significant dynamics. Between January and September 2012, exports from Colombia to the US grew 6.7%, and the trade balance showed a surplus of $6.64 billion. Also in this period, 20.9% of foreign visitors who entered Colombia came from there. Regarding FDI from the US to Colombia, it reached $268 million, excluding the oil sector, in 1H2012. As for the EU, Colombia’s exports to this bloc grew 4.1% in the first nine months of 2012, which yielded a positive trade balance of over $1.19 billion. During this period, 16.9% (199,645) of the foreign visitors that entered the country came from the EU.

What are the prospects for FTAs with other nations, and in what areas does Colombia need to improve to make the FTA boom successful?

We have set the goal of having a total of 18 FTAs by 2014. On this front, we have concluded negotiations with South Korea, and we are continuing negotiations with Israel, Turkey, Costa Rica, and Panama. We have also advanced contacts for the start of negotiations with Japan, the Dominican Republic, Australia, and China, among other countries. Moreover, we aim to advance further through agreements with the Pacific Alliance, the countries of the Northern Triangle of Central America, and Uruguay so as to improve the integration of Latin America. These agreements will open up great opportunities for the producers of goods and services in an expanded market of 1.5 billion inhabitants. We are also making great efforts to improve competitiveness in all of the areas that this concerns, such as in road infrastructure and the renovation of seaports and airports, among others. To this end, the Santos administration has announced significant investment over the short and medium term. Furthermore, another major challenge is to achieve real access for our products, especially those of agribusiness. Here, we have been working on an agenda to meet the eligibility requirements for sanitary and phytosanitary (SPS) standards, which have included the Agricultural Institute of Colombia and Invima. In respect to trade promotion and making the best use of our trade agreements, we have been strengthening programs and initiatives that aim to manage and develop the best conditions of access. To this end, we have relied on the support of Proexport, which has been conducting outreach programs and facilitating export and investment activities.

What are Colombia’s advantages as a destination for foreign investment?

Today, Colombia has become one of the best countries regarding the protection of foreign investment, and herein is the reason for our boom in this indicator. According to reports from the Banco de la República, as of November 2, 2012, over $14.16 billion had entered the country. This is an increase of 12.9% when compared to the same period last year, which came in at over $11.52 billion. Other significant factors that have contributed to this good performance include the progress that we have made in our agenda of trade and investment agreements, and the improvements that have been made in our business climate, as well as the excellent management that Proexport has shown in promoting the country as a destination that is well suited for the creation of companies. As for our investment goals, we seek to have 16 international agreements in force, which means 10 more than the six that this administration has already begun. These new countries include Canada, the European Free Trade Association (EFTA), India, the US, China, the UK, South Korea, Japan, Turkey, and the EU. During this administration, we aim to establish stable rules for investment with these countries.

“The Ministry of Trade, Industry and Tourism has established clear goals, which include boosting the nation’s non-mining/non-energy exports to roughly $20 billion.”

In what sectors are you seeing increasing activity and from which markets?

What is your outlook for the performance of the Colombian economy in 2013 and beyond?

The Colombian economy is on a solid track, and we aim to keep up this positive performance over the coming years. To this end, the Ministry of Trade, Industry and Tourism has established clear goals, which include boosting the nation’s non-mining/non-energy exports to roughly $20 billion, half of which will be from the 16 high-potential sectors that are currently enrolled in the Productive Transformation Program (PTP), as well as gaining preferential access to a market of over 1.3 billion consumers through our various trade agreements that are in place, signed, or under negotiation. And, of course, we aim to welcome over 3.6 million foreign visitors to the country.