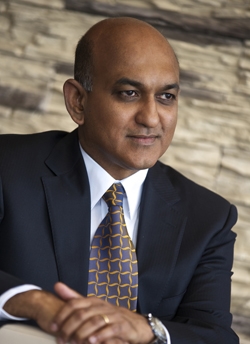 Prasad Abraham’s banking career started in 1977 when he joined Citibank, then, in 1983, he moved to the Arab Banking Corporation in Bahrain. There he was the Group Chief Auditor until 2003, serving on the audit committee of the parent company, and also the audit committees of Banco Atlántico in Spain and ABC International Bank in the UK. In 2004 Prasad was appointed as the Deputy CEO of ABC International Bank in London. In 2007 Prasad was involved in the set up of Al Hilal Bank in Abu Dhabi. With over 30 years of experience in the banking industry, Prasad Abraham was then tasked with developing a subsidiary of Al Hilal Bank in Kazakhstan.

Share on:
"Raising awareness for Islamic finance is really important."

Islamic banking is in its infancy in Kazakhstan; how is it shaping Kazakhstan’s financial environment and what role do you think it will play in the country’s development?

Islamic banking is growing slowly, but it has certainly been picking up over the last two years. Kazakhstan is generally quite a regimented country. From a regulatory point of view there are a number of procedural requirements. People were not familiar with this new banking system. This meant that, in the early years, we had great difficultly penetrating different segments, especially the corporate segment. The legal departments of many customers refused to accept the transactions. Fortunately we built up a good legal team. In the first two years, our team spent more time in the client offices than in our office. We have been here four years now, and things have changed and improved; people accept the product now. There are also regulatory issues. In particular, because Kazakhstan is a new country, the Islamic banking law that was brought in was based purely on theory. This is one of the few countries where the law was made and then the industry started up. The regulators have been quite supportive, but the amendments have been waiting for parliamentary approval for almost 18 months.

Is Islamic banking competing with the conventional banks here in Kazakhstan, or is it better to talk about integration?

I would say integration. In Kazakhstan the top six banks account for about 75% of total assets, and there are a total of 38 banks. This means that 32 banks are then trying to share the remaining 25%. We are the most recent bank to enter the country and we have less than 1% of the market share. Although we are the last, we are not last in terms of asset size and capital. The economy is growing: that generates additional business. We have grown, but I would not say at the expense of stepping on the toes of any other players.

How would you rate your financial performance in 2014 compared with the results you published in 2013?

In our first year we had maybe $40 million in assets. The next year that grew to $90 million, a 100% growth, but those percentages don’t tell the whole story because you are starting from a very small base. Definitely in terms of assets and profit, we are exceeding our budget in both areas, and even for the next year we are planning a steady growth rate; hence that is well in line with our expectations.

How are you working to increase the awareness of Islamic banking offers in the country?

Raising awareness for Islamic finance is really important. Twice a year we have our sharia scholar visit Kazakhstan and we do a series of awareness lectures covering a broad spectrum of stakeholders and society. Our biggest focus is on university students. We go to a number of different universities because that is where you can find tomorrow’s CFOs and CEOs. At the moment, when our relationship manager goes to see a client, the meeting has to begin with an explanation of what Islamic banking is, and how it works. Hopefully with the benefit of these training sessions, the CFOs of tomorrow will not need any explanation about Islamic finance. We also focus on professors and lecturers, so that they can educate the local community. We address the regulators and also CEOs and CFOs of existing companies, even those who are not clients of Al Hilal, as they need to have a better understanding of the alternate means of financing that are available. Plus, because we were not reaching out to the general consumer, we gathered together all the imams from the Almaty region to tell them about our approach to banking. Now during their Friday prayer sermons, they spread the word amongst their local communities; this gives us a greater reach.

What specific sectors are you currently focusing on?

Our focus is on the larger corporates and the government. Within that, we have a broad exposure to the various sectors: oil and gas, transportation, and agriculture. We are looking at the various business lines other banks are involved in that have possibilities and that an Islamic bank can enter based on existing regulations.

What are your expectations for the future and what factors will lead to the consolidation of Al Hilal?

Our medium-term goal is to test this model in Kazakhstan, and if it is successful, use it as a launch pad for other CIS countries. There have been a number of expressions of interest regarding the development of Islamic banking, particularly in Azerbaijan, Tajikistan, and Turkmenistan. Some countries are developing Islamic banking privately, but I am told that it is with the government’s strong endorsement. Once they have a workable model they will just approve it. For Al Hilal to move out into other CIS countries there would be one main prerequisite, and one not so important secondary issue. The main prerequisite will be the existence of acceptable legislation. Islamic banking is an entirely new framework. Al Hilal is a bank that is owned by the government, and we cannot take too many risks at this time; reputational risk is very important to us, so legislation is necessary. Secondly, there needs to be a sufficiently justifiable economy for us to go in and start operating, otherwise the model would be different in the sense that maybe from a charitable point of view you would do it, but that is not the model that we do here. For us there needs to be a sufficiently vibrant economy to justify the expansion and that would be the characteristic that we look for. We believe that we are getting to our goal.