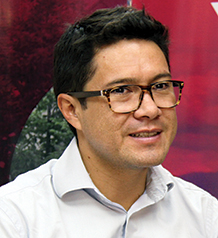 Héctor Rodrí­guez graduated from the Universidad Católica del Ecuador, where he studied Social Sciences as applied to International Relations. Having obtained an MSc in government and public affairs from the Facultad Latinoamericana de Ciencias Sociales, he has taught public policy courses in the Universidad Internacional del Ecuador and the Altos Estudios Nacionales (IAEN). He has also served as Executive Director of the Ecuadorean Agency for International Cooperation (AGECI), and as assessor for the National Secretariat for Planning and Development (SENPLADES). In addition, he has worked as President of the Directorate of the Ecuadorean Institute of Education Credit and Scholarships (IECE), and as General Subsecretary for Science, Technology, and Innovation.

Share on:
TBY talks to Héctor Rodrí­guez, CEO of Yachay EP, on the growing entrepreneurial community in Ecuador, and the university's planned investments in both the private and public sector.

YachayTech opened its doors in March of 2014. How has the university developed over the year?

We have consolidated the university, and currently have 640 students living in YachayTech dorm rooms. All of the lecturers and professors hail from top universities, and all hold a PhD or equivalent according to the Bologna Act. We have opened the Institute of Technology for new professionals in dual programs in collaboration with the German government, the University of Berlin, and the Technical University of Berlin. We hope to have consolidated our infrastructure for the first stage of the project, which is the 280 ha Science and Technology Park, and by September we will have opened two centers of technology to accommodate more than 10 companies in the ICT field. We have acquired a data center set to be the most advanced in Latin America in the field of processing. We also have consolidated a residential area for administrative and academic staff, and for people coming to live in Yachay City of Knowledge, such as employees from industry. We are now the first center of science and technology in Ecuador, with publications in indexed magazines and books specialized in science and technology, including 50 publications between March 2014 and July 2015. We have realized numerous collaborations with research centers in the public sector, other universities, and the commercial area of the enterprises that are associated with Yachay City of Knowledge. We have organized more than 20 seminars and academic events during the year, with more than 400 scientists associated with Yachay City of Knowledge. There are over 650 entrepreneurs associated with Yachay City of Knowledge, collaborating with our Innopolis incubator.

What accounts for the growing entrepreneurial community in Ecuador?

Considering that social and economic behavior is such a large part of the economy, you almost have a tangible sense of the entrepreneurial spirit in all economic activity. This stretches far beyond the quest for accommodation, to sharing resources toward broader economic progress. The way to increase quality of life is to facilitate the utilization of better technology to improve the productive process and implement best practices. It’s a matter of transferring adequate technology to give those working in industry a high value chain in the production process. Right now the challenge for Yachay City of Knowledge and the science and technology system is to boost productive processes. For example, agriculture and ICT are merging to transform activities for precision agriculture. Small business owners are doing better business just by opening new sales channels such as e-commerce and selling online.

The total investment in Yachay City of Knowledge from 2013 to 2017 will exceed $1 million.What other investments will materialize this year?

We are optimistic about the construction of six plants in the pharmaceutical industry, in cooperation between the public and private sectors. More than $260 million will be invested in basic services in Yachay City of Knowledge to improve their services and complete the urbanization of the park. We are bringing online three optic fiber backup networks in each site in Yachay City of Knowledge. In terms of private investments, in Yachay City of Knowledge we have 27 companies working with us, such as Telefónica, Cisco, and Indra, for a total of more than $20 million, and also with the Chamber of Industries and Production, and the textiles industry where we are developing a project valued at $5 million for innovation labs.