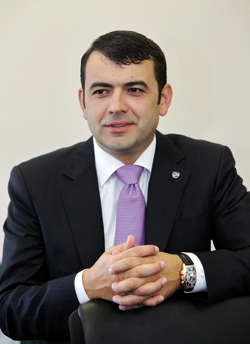 Prior to joining Azercell Telecom in September 2012 as CEO, Chiril Gaburici worked in a variety of positions at Moldovan mobile operator Moldcell. He started his career as the Regional Sales Unit Head in 2003. In 2004, he became the Head of the Sales Department of the company, and in 2008 he was promoted to CEO of Moldcell. He holds an MA in Economics from the Free International University of Moldova and is currently a PhD candidate at the Moldovan Academy of Sciences.

Share on:
What have been some of the major developments at Azercell in 2012? For Azercell, 2012 was very intensive and full of new horizons. The company’s market share of Azerbaijan’s mobile […]

What have been some of the major developments at Azercell in 2012?

For Azercell, 2012 was very intensive and full of new horizons. The company’s market share of Azerbaijan’s mobile communication market is 53%, and its network covers 99.8% of the country’s population. By the end of 2012, the number of Azercell subscribers reached 4.4 million people. We operate 54 customer service centers, of which 32 are in the regions. The most exemplary symbols of Azercell’s successes in 2012 were the general sponsorship of the Eurovision Song Contest 2012, the deployment of 4G mobile internet technology (LTE) for first time in Azerbaijan, and the significant upgrade of our 3G network. Currently, Azercell is the provider of the fastest mobile internet in Azerbaijan. In 2012, Azercell received a silver certificate issued by the Investors in People (IIP). Azercell Telecom LLC is the first company to receive a silver certificate among the countries of the CIS, and most importantly among other international telecommunications companies. Azercell is a part of the TeliaSonera group of companies, and in 2012 the group became one of the world’s top 100 sustainable companies, rated 13th on the list compiled by the World Economic Forum.

Having recently been appointed CEO of Azercell, what are some of your personal aims for the company in the short term?

In a country where the tradition of communications is part of a person’s identity, earning the trust of millions does not come easily. In this endeavor, we had to make a long but interesting journey together with our loyal subscribers. In the age of digitalization, Azercell has been playing an active part in the process of enhancing people’s access to information, knowledge, and education, which in turn is helping to transform their lives and foster social change. Our network helps people to do business, as well as save time and money on travel.

The mobile penetration rate in Azerbaijan stands at around 115%, which is well over the world average of 80%. What does it take to thrive in this environment?

Azerbaijan is a fast-growing country with a young population. In a country with such high mobile penetration, Azercell manages to maintain its position as the leading mobile operator in Azerbaijan. Our superb customer care and quality network ensure that Azercell is the first choice for most Azerbaijanis. Looking back at our history, we realize that Azercell has not merely been a cellphone company, but truly a part of the society where it is functioning.

“Currently, Azercell is the provider of the fastest mobile internet in Azerbaijan.”

It will be President Ilham Aliyev’s 10-year anniversary in 2013. How would you describe the economic developments in Azerbaijan over the past decade?

Over the last 10 years, Azerbaijan has developed a lot. The government of Azerbaijan has made every effort to make the country attractive to businesses, investors, and tourists. Today, Azerbaijan is one of the world’s fastest-growing economies. It has become a venue for global events, conferences, and festivals, through which our culture is promoted and the world gets to know and understand Azerbaijan better.

What are Azercell’s medium-term plans?

Our goal is to be a company that every Azerbaijani can be proud of. Azercell has done its utmost to earn this title by providing the best service to its subscribers, and we will continue to do so even further.