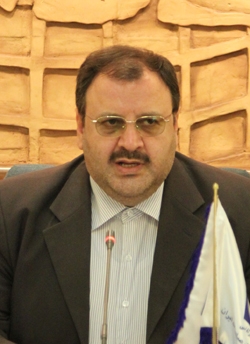 Changes in the Air

Kazem Doost Hosseini was appointed to the position of Chairman and CEO of the Export Guarantee Fund of Iran by the Minister of Commerce in February 2011. He holds a PhD in Accounting from Manchester University, and has served in various managerial positions in financial companies and banks, the last of which was the International Director of the Export Development Bank of Iran.

Share on:
The Export Guarantee Fund of Iran (EGFI) was first established in 1974 and re-opened in 1994. How are your operations increasing the nation’s non-oil exports? EGFI is doing the same […]

The Export Guarantee Fund of Iran (EGFI) was first established in 1974 and re-opened in 1994. How are your operations increasing the nation’s non-oil exports?

EGFI is doing the same type of business and provides the same insurance coverage that many other export credit agencies (ECAs) around the world do. We are a member of the Prague Club and meet every six months to review all of our activities relating to export credit insurance and risk coverage. Our main duties can be divided into two parts: banking coverage, which is designed to provide export finance for Iranian exporters, and export credit insurance. We are the only Iranian organization to support non-oil exports. Exporters need to know they will get paid after delivering their goods and services outside the country, and we play a major role in these kinds of transactions. We can guarantee payment and issue an insurance policy for exporters to ensure that they will be able to receive their money after export. We work closely with companies and importers in other countries, and this is the non-banking aspect of our support. In terms of banking activities, there are a number of credit facilities offered by Iranian banks to exporters, but banks need to be sure that when they provide a loan to an exporter they will get their money back. We guarantee loans in favor of the bank so that we can help exporters be financed. We are acting as an intermediary between banks, Iranian exporters, and foreign importers.

How do you protect your investors from foreign political risk?

Upon assessing credit risks and export credit finance, the creditor or guarantor risk is analyzed with a model. Then a credit ceiling is allocated accordingly. In this case, the risks are both political and commercial. However, for FDI only political risks are important and this involves the study of business environments, investment climates, political stability, and investment rules and regulations in the host country. The main political risks are: war, expropriation, and acts of state. Like many ECAs, EGFI supports Iranian investors.

How much has EGFI enhanced export volumes?

Our role in non-oil exports is reasonable. However, we are trying to increase our involvement. We currently cover around 7% of Iran’s non-oil exports, but we have a target to increase that by one percentage point every year because exports in Iran are increasing accordingly. The international average for top ECAs is around 10%, and in the MENA region it is around 4%. I believe that we will have many more active years in the future, and the number of exporters asking us for credit coverage is increasing year by year.

“Our plan is to reach $80 billion in exports by 2013. By doing this, we can reach a trade balance with less dependence on oil exports.”

What are the main Iranian products EGFI covers and what trend do you see with respect to the products exported?

Petrochemicals, industrial goods and machinery, and pistachios are the top three, followed by carpets, dried fruit, and other agricultural products. At the moment, we are covering many techno-engineering products and services, and we cover many construction projects such as water treatment plants and hydro-power dams. We also cover non-oil related chemicals and medicines. According to statistics, the IT sector is also increasing its production and exports. As a rule, large companies do not prefer to work with EGFI, as they are already strong enough. Therefore, we are more inclined to assist SMEs that are working actively to develop Iranian markets. However, we never decline a request for coverage, as we do believe that “Made in Iran” has the capacity to expand in emerging markets.

In which foreign markets is EGFI providing the greatest level of coverage?

We are covering many African states, CIS countries, and Asia—especially China and India. We also cover some exports to Europe, Latin America, and even the US and North America. We don’t see serious problems in our future exports because foreign importers are familiar with our products such as pistachios, caviar, and carpets. Iranian exporters trade mostly with neighboring Muslim countries, where they have stronger ties.

How has the credit contraction due to the global economic downturn affected EGFI’s operations?

Many countries have been influenced by the global economic situation, but some of our activities have expanded because of the global credit crunch; it had a positive impact on our activities. We are working closely with other ECAs. We are also looking at helping companies obtain the machinery to manufacture products we normally import. We are acting as guarantors between the companies that manufacture this kind of equipment and Iranian producers.

What are your medium-term expectations for export growth?

Considering the statistics since 2005, we have seen increasing exports. I believe that in 2013 we will see a greater export volume compared, for example, to 2011, when we had $45 billion worth of non-oil exports. Our plan is to reach $80 billion in exports by 2013. By doing this, we can reach a trade balance with less dependence on oil exports.

Recently, EGFI has focused on trying to attract tourists to Iran in order to boost the tourism sector. What is the strategy behind this new project?

We made agreements with several local banks to allocate credits for foreign tourists to visit Iran. In other words, travel agencies can use this credit and pay it back in two or three years. We receive many pilgrims as well as normal tourists. According to our policy, we have to support them. For example, if you are Italian and you go to your travel agency, they will organize your tour and you’ll pay them back in a couple of years. There’s a lot of credit available and the system will be activated very soon, probably by the end of 2012.