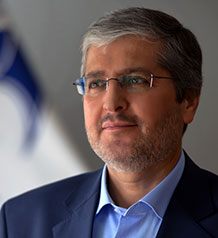 Change in the Air

Farhad Parvaresh has more than 28 years of experience in Iran Air. He was appointed CEO of Iran Air in 2009. Prior to that he served the Director for Planning & Management services and a member of the company’s board. He was also Iran Air’s General Manager in Germany, where he was responsible for the firms branches there. In addition, he served 13 years in different positions in Iran Air engineering and maintenance. He holds a degree in mechanical engineering and a master’s in industrial management.

Share on:
"The modernization of our fleet is an indispensable part of the airline's strategic plan to lower costs."

How does the JCPOA represent a turning point in Iran Air’s operations?

The sanctions on the Iranian aviation industry started 38 years ago, after the Islamic Revolution, but over the past seven years they were worse. During this time we could not purchase any aircraft nor refuel in European airports. When the JCPOA was signed, everybody was expecting that the civil aviation sanctions would be lifted and the US would permit the transfer of civil aircraft to Iran, Today, eight months after the implementation day, I cannot say this achievement has been done successfully. The JCPOA has partially relieved the pressure on the Iranian civil aviation industry, but there are still some remaining issues, such as difficulties in resuming banking payments. European and Asian airlines have restarted their flights to Iran, and we are making sure that they are provided with all the necessary facilities to operate in Iran. Unfortunately, there has not been the same response from other countries regarding Iran Air. Our history goes back 55 years, and we reached 14 destinations in Europe without receiving one drop of fuel abroad. In most countries the national carrier enjoys high prestige and represents the country internationally. Iran Air must not be an exception to this general axiom and should represent Iran in the international arena in its role as national carrier and in rendering world-quality services.

What is the current status of the renovation of Iran Air’s fleet after the agreements with Airbus and Boeing?

The modernization of our fleet is an indispensable part of the airline’s strategic plan to lower costs, to enhance safety and comfort, and to have a larger share in the competitive market. Accordingly, the agreements with Boeing and Airbus affirm our determination to the modernization of our fleet. The negotiations are still continuing, and the long-awaited export license for these two major aircraft manufacturers by US Organization of Foreign Assets Control (OFAC) should be issued soon. The Airbus deal was signed eight months ago, though the purchase agreement is still ongoing. In addition, Iran Air was Boeing’s first operator in the region, and now it has the willingness to be present in the Iranian market again. Moreover, we are negotiating with other manufacturers like ATR, Bombardier, and Embraer, but they are also awaiting the OFAC license.

What position would Iran Air like to achieve in the international civil aviation industry?

We have defined a 10-year plan. In the first three-year phase we expect to receive the aircraft we have ordered. We have missed one year already as we were supposed to receive seven or eight wide bodies in 2016, but we will receive only one or two. According to the schedule, the plan for 2017 is to receive 12-14 aircraft from Airbus. By substituting the old aircrafts with new ones, we will keep the present domestic and international network and increase frequency. As a result we will be able to compete with foreign airlines for European or Asian routes and in the future will define new destinations.

How do you assess the potential of Iran to become a transit hub between Europe and Asia?

One of the major issues in becoming a transit point is having the right infrastructure, and at present I do not think Iran is prepared to be a hub. There is a five-year plan to expand the five major airports of the country. The infrastructure needs first to be expanded for the transit of aircraft. At the moment, Iran can receive all types of aircraft with the exception of A380s. If we succeed in our infrastructure expansion plans, we have the possibility to be a point of transit between Europe and Asia, as Tehran is a natural to stopover point on that route. In contrast with countries in the Persian Gulf, stopping over in Iran would save at least two hours of flight time and this would reduce fuel and ticket costs. We must prepare the necessary equipment to bring passengers five or six hours from Europe and transfer them another seven or eight hours to the Far East. Overall, the optimization of operational routes can prove Iran to be a more cost-efficient hub to connect both continents. The potential is great but the infrastructure needs more development and efficiency to meet the demand.

I have been with Iran Air for 27 years, starting as an engineer in the technical department and passing from the commercial department as a representative in Germany, then moving up into management. I love this company and have been dealing with the sanctions during my entire career and carrying the responsibility of the safety of our staff and passengers. After many years working under such difficulties, I would be happy to see the logo of Iran Air on new aircraft. Iran Air has been a pioneer in the past, operating daily flights from Tehran to New York with Boeing 747SP. We have the experience and the potential to fly to Vancouver, Montreal, Singapore, and Sydney, with pilots that have over 32,000 flights and 40 years of experience and technicians of almost the same in this company. All of them deserve to see this change. Before leaving the company, I would like to be able to say that I have bought new aircraft for Iran Air. In this sense, I expect to see a more agile and responsive execution of the JCPOA commitments. Iran Air has learned from its experience of being a service-oriented company and we wish to be the first-choice for Iranians by virtue of our actions.