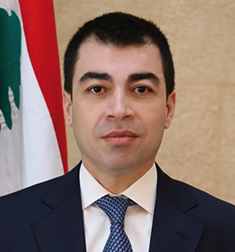 Born in Aley in 1971, Cesar Abi Khalil holds a diploma in civil engineering from the Saint Joseph University. He has been a member of the Order of Engineers in Beirut since 1995. Additionally, he was president of the student body at the Faculty of Engineering for the FPM from 1993 to 1994, and was a member of the engineers’ body in the FPM from its foundation until 2009. He was FPM candidate for the Maronite seat in Aley in 2009, as well as in the postponed 2013 and 2014 elections. He has occupied the position of Minister of Energy & Water since 2009.

Share on:
"Demand was already heightened by the continual increase of displaced Syrians."

What are the main highlights and points already accomplished in the National Energy Efficiency Action Plan for 2016-2020?

The first NEEAP for Lebanon was developed for the period 2011-2015, where Lebanon was the first Arab country to have its NEEAP developed, published, and adopted by the national government. In June 2015, the LCEC organized an evaluation session of the first NEEAP with a wide participation of the different stakeholders, and based on this session, several modifications were introduced when structuring of the first version of the second NEEAP for Lebanon for the period 2016-2020. For the second NEEAP, work has already started seriously on four of the main initiatives, which are the building code, the minimum energy performance for home appliances, the labeling of appliances, and the pilot projects of energy efficiency in public buildings. For the national building code, there is a need to update the current version. The work is being done with several partners in order to include green buildings specifications within the national construction law. As for the minimum energy performance system (MEPS) and the labeling of home appliances, the work is being carried out on several levels through the establishment of a legal and regulatory framework to analyze the different set standards and their adaptation to the Lebanese environment, and to also identify key appliances to include in the regulatory framework. Finally, the buildings of the public sector are one of the largest consumers of electricity within Lebanon. This is why the NEEAP dedicated a measure for implementing energy efficiency pilot projects within public sector buildings in order to showcase the potential of energy efficiency within this sector. At this stage, visits to identify the key buildings are being carried out in order to identify the representative buildings while working at the same time to procure the needed budget and financing.

What is your outlook for Lebanon’s alternative energy, as well as for the goal of double the share of renewable energy to 12% by 2020?

Lebanon announced the goal to achieve in 2020 a 12% of renewable energy in 2009. This goal is mainly dependent on the solar, wind energy, hydroelectricity, and biomass resources. The Lebanese government has issued the first licenses to produce electricity from the private sector for three wind farms in the Akkar region with a capacity of around 200MW. Moreover, the Ministry of Energy and Water has launched the request for proposals for the deployment of 12 solar farms with a capacity of between 120-180MW all over Lebanese territory. Both these projects are key milestones toward the achievement of the national target in 2020 as well as integrating the private sector into the renewable energy industry.

What are your main goals and priorities for the year ahead?

This year, our ministry submitted an additional plan to cover for the increasing urgent demand during the summer season that was aggravated by the inflows of the Lebanese diaspora due to the sense of stability that was created by the election of our new president. Demand was already heightened by the continual increase of displaced Syrians. Hence, it was important to prepare a plan to cover this extra demand and increase electricity supply in Lebanon. The plan relies on several pillars starting with renewable energy projects. The second pillar was the rental of floating power production units with a capacity of 800-1,000MW and tying them to the existing grid in order to offer a fast boost to our generation capabilities. The role of the private sector was mentioned in previous plans of the Ministry of Energy and Water, and it is still an important part of all our plans. In line with these efforts, we are working on the integration of power plants of 1,000MW through the Independent Power Producers (IPP) modality.