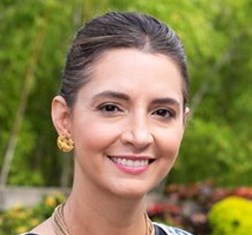 Catalina Restrepo holds a degree in business administration from the University of St. Thomas and a master’s degree in public relations from Universidad Autónoma de Barcelona. She previously worked as a consultant for The World Bank and was also employed in the Medellí­n mayor’s office and at the governorship of Antioquia.

Share on:
“We will host the World City Summit in 2019, and it will be the first time it is held in Latin America.“

How was 2018 for ACI Medellí­n, and what were your priorities and greatest achievements during this period?

ACI Medellí­n captures and seeks FDI resources for international cooperation to improve the quality of life of the citizens of Medellí­n, and we are aligned with the development plan Medellí­n Cuenta con Vos 2016-2019. Although we have annual goals, for me as a director, long-term goals are more important. For 2018, ACI Medellí­n targeted USD242 million in investment, and as of October, we have attracted investments totaling up to USD250 million. Which means that we not only have reached our goal, but we even exceeded it. As for jobs related to that investment, we achieved almost 2,000. Although we have annual goals, we always aim big because we know we can achieve big things. Medellí­n has many opportunities that we can take advantage of. Therefore, we are a 50-people team focused on Medellí­n and its metropolitan area from different approaches.
In terms of cooperation, in 2018 we exceeded expectations. Currently, we have a great project with the Ministry of Transport of Korea which reaffirms Medellí­n’s commitment on air quality and sustainable mobility. Therefore, 2018 has been a tremendously positive year.

What potential does ACI Medellí­n see in the ICT sector in Medellí­n that makes it a great target for foreign investment?

Medellí­n has the most ambitious science, technology and innovation policy in Colombia. Currently, we invest 2.4% of the city’s GDP in science, technology and innovation, when the national average is 0.67%, and in 2021, we will invest 3%. We are betting on Orange Economy, the creative industries, and the cultural sector. Grounded on these bases, we set up the Ruta N strategy, which is an anchor for investment attraction due to its landing strategy and added value that other cities do not have. There is also an opportunity in human talent. Training to cover the demand for employment in this sector must be short and customized to industrial needs. We count on SENA or our different educational institutions specialized in technology to train these young people. For us, it means that those young people will no longer be on the streets, but they will start generating income from an early age. This allows us to be on par with European countries, where formal education is 70% technical-technological and 30% university.

Medellí­n has seen substantial investments in the tourism sector. What could this mean for business tourism in the city?

It has been a boost that the world has given to Medellí­n for its internationalization. The city has transformed its difficulties into opportunities. To attract people, we started to attract renowned international events in tourism, business. This meant a joint effort from the business sector, the local government, and the academic sector. The world trusts in Medellí­n already due to, among other aspects, its institutional continuity regardless of the mayor in turn. Private entrepreneurs created the University-Enterprise-State Committee 16 years ago to integrate the government, the private sector and the academy in the construction of a new Medellí­n. We also involve foreign investors in these projects because we want them to stay in Medellí­n and feel part
of it.

What are the strengths of Medellí­n and the region of Antioquia to attract foreign capital?

They include citizen trust, our people, our commitment to make things happen and being excellent business partners. There is cooperation between the companies, the government, and the academy in the ecosystem. We have free zones, and we are working on a wider competitive infrastructure with the construction of the Toyo Tunnel. It will connect us better with Urabá and its three ports, it will change the history of Antioquia. Additionally, the quality of life in Medellí­n is extremely attractive, its quality public transport system and the vibrancy of the city makes Medellí­n and Antioquia a strong region.

What initiatives does ACI Medellí­n take to promote Medellí­n in the international market?

ACI Medellí­n carries out events such as Why Medellí­n? To do that, we study the areas that could be reinforced through foreign direct investment. For instance, the US is our largest investor and we work to strengthen the relationship of trust. However, there are other markets. Thus, when a government has already cooperated with Medellí­n, we know there is already a trustful relationship between businesspeople. Our cooperation agreement with Korea attracted Korean companies to explore Medellí­n, and the same has happened with Japan and the US. Cooperation is useful for investments. Also, we have created a network of ambassadors with the people from Antioquia living abroad. Receiving delegations from different countries that come to learn about Medellí­n and about what we are doing here, is another way to promote the city. With this continuous flow, we are getting the world to know us. In 2019, we want to reinforce our relations with the US and explore Canada. The Pacific Alliance has gained strength and new governments in other countries have begun to show interest in Colombia.

Medellí­n has an agreement for fossil fuel-free streets. What has this meant for foreign investment?

All these actions ensure greater quality of life for the people of Medellí­n. We want to be the capital of electric mobility by 2030. Therefore, we already have a plan to renew the buses and taxis fleets, and there is a project to create more electric stations. However, this poses us also new challenges because they are completely new initiatives, as in the case of insurers. Nevertheless, we are sure these actions will be reflected in the quality of life and investment opportunities.

What projects and initiatives does ACI Medellí­n have for 2019?

2019 will be an active year for ACI Medellí­n. We will continue working on all cooperation and investment attraction issues, though we will be leaders in the city of major events. We will host the World City Summit in 2019, and it will be the first time it is held in Latin America. Asian and European mayors who have never come to Colombia will visit us. We are also considering holding an international orange economy summit. In 2017, Medellí­n entered the World Network of Learning Cities and in 2019 we will be the headquarters of the Network. We are the only Colombian city and the third from Latin America to join that network. We have many events that had not arrived in Colombia. We will be focused on Aliados Medellí­n, an international allies’ event. All these events will allow us to bring great things to Medellí­n.