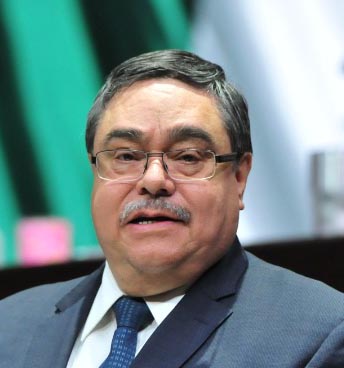 Carlos Pavón Campos is one of the few union leaders in Mexico who was previously a miner. Originally from Zacatecas, he is the leader of the SNMM FRENTE, federal deputy of PRI, and president of the National Union of Mining, Metallurgical, and Metal-Mechanical. His main objective as a mining leader is to make occupational safety a way of life among colleagues, ensure job stability, and improve the economic incomes of FRENTE members. Gender equality and respect for women has also been an achievement within the union he directs.

Share on:
FRENTE is focusing on making sure the rights of miners continue to be protected in light of the new Outsourcing Law.

What were the trade union’s main achievements over this last year?

Unfortunately, there were not many achievements. Mining productivity fell due to the pandemic. The government did not manage the pandemic as well as it could have done; we were forced to halt commercial activity and reduce mine productivity. In addition, mining was particularly affected because it was not considered an essential activity. The planning of the pandemic was unfortunate both in terms of health and the economy; however, we made a good profit in 2021 given that metal prices rose, as did the dollar. Mining companies saw improved profit sharing in 2021, not because they reached their expected productivity levels, but because of these other reasons.

How have the trade union’s objectives changed, and how are you supporting workers given the current situation?

We are keeping them informed, and in conjunction with their employers we are also providing them with face masks and hand sanitizers. There are many companies who not only hand out face masks to workers, but also to the general public, as in the end we are all in this together. Death rates among our workers have been high, which shows the mismanagement of social security. In the public health sector, only two out of every 10 people who were hospitalized survived. In the case of private healthcare, eight out of every 10 people survived. The problem is that not everyone has access to such medical attention. The government created temporary hospitals in order to fight against COVID-19, but patients did not receive sufficient care. Therefore, we had to take to the streets to protest.

What can you tell us about the Mexican Outsourcing Law?

Outsourcing is used by many companies. In Mexico, we have everything we need in order to properly regulate this law. We have secretariats for finance, labor, social security, and more. However, it is crucial that all these organizations work properly and in accordance with the law. I am not against regulation of the law. In fact, I am against its elimination. 7.5 million Mexicans are working under such contracts, and their jobs could be at risk. Our government wants people to live off subsidies and does not gives us the opportunity to grow as a country. Through this Outsourcing Law, it made an unconstitutional change regarding the workers’ profits. The Mexican Constitution says there must be a National Profit Commission that regulates workers’ profit, and this was set at 10%. The government is now changing this in the Federal Labor Law, in which workers will not receive their usual profits, but other forms of compensation. Our president said mine workers are not affected by this modification, but the government will keep MXN45 billion due to taxes. This law was created for the government to collect money. Now, it is reported that it also wants to manage Retirement Funds Administrators (AFOREs). AFOREs represent 17.5% of GDP, which equals more than MXN4 billion, and are currently private enterprises, which guarantees the continuity of their activity. Therefore, we must do everything in our power in order to keep it that way. In addition, pensions were also modified. Instead of needing 25 years of contribution in order to receive a pension, it was reduced to 15, though one must be at least 60 in order to receive 85% of the pension and at least 65 in order to receive 100%. Therefore, if you start working at 20, you cannot receive a pension even if you have worked for 15 years, as you must meet the age requirement. What is more, our social security contributions are paid in relation to our full wages. To date, pensions have been paid in accordance with the minimum wage. This new law says pensions are paid based on unit of measurement and update (UMAS), which is 42% less than the minimum wage. UMA corresponds to MXN89, whereas the minimum wage is about MXN130.