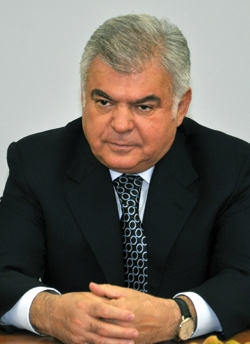 Minister of Transport, the Republic of Azerbaijan

Ziya Mammadov had a long career in the railway business, beginning his career with Azerbaijan State Railways. Working his way up, he occupied various positions including as the Assistant Director of Human Resources at the Bilajary Locomotive Department, and Substitute Director at Davachi Depot. Later in his career he was appointed the Chairman of the Azerbaijan State Railway Administration, and served in the position until 2002. In 2002 he was appointed as the Minister of Transport.

Share on:
Having served as Minster of Transport for 10 years, what would you say some of your major accomplishments have been? In recent years, the activities of the transport sector have […]

Having served as Minster of Transport for 10 years, what would you say some of your major accomplishments have been?

In recent years, the activities of the transport sector have been focused on a major overhaul of the entire transport infrastructure, the complete satisfaction of the population, the economic need for transport services, and the effective organization of business with the aid of ongoing reform. These goals have always been in the spotlight of the Ministry of Transport. Specific measures have been taken to accurately fulfill the tasks laid down in various state programs. Over the last 10 years, the volume of permanent investment in road transport infrastructure has reached AZN7.4 billion. The average annual growth in freight traffic is 8.18%, and 5.54% in passenger traffic. A total of 1.6 billion tons of cargo and 11.4 billion passengers have been transported. The average annual growth rates in the turnover of cargo and passenger transportation has been 17.36% and 6.9%, respectively. The volume of cargo in the Europe-Caucasus-Asia international transport corridor was 465.4 million tons, registering an average annual growth of 5.12%. The volume of transit transportation in said corridor is 145.8 million tons. Due to the transition of Azerbaijan to a market economy, the transport sector has undergone institutional reform, and the transport infrastructure and management institutions have been significantly modernized and upgraded. In order to ensure the effective management and regulation of the road transport sector in the conditions of new economic relations, “The Single Transport Policy Concept of the Republic of Azerbaijan,” “The Strategy on the Development of a Transport System in the Republic of Azerbaijan,” and “The Transit Strategy of the Republic of Azerbaijan” have been developed to facilitate integration into the international system of transport and contribute to the overall development of the country’s transport infrastructure. In order to facilitate its integration into the international system of transport, eight laws have been adopted, 16 presidential decrees signed, 79 decisions and resolutions of the Cabinet of Ministers issued, 106 bilateral and multilateral agreements on cooperation in the field of transport concluded with a number of countries, and 27 memorandums signed. In addition, the Republic has joined 15 agreements and conventions of the UN Economic Commission for Europe (UNECE).

What is the country’s policy for opening up more international air links for regional cities in Azerbaijan?

A total of AZN956.3 million has been invested in the development of the aviation sector and the renewal of the air fleet. Over the past several years, four Airbus-319s, four Boeing-757s, one Boeing-727, one Boeing-747, two ATR planes, and six helicopters have been purchased. In addition, a modern Baku Cargo Terminal with logistical management meeting modern requirements has been commissioned. An international airport has been built in Gabala, while international airports in Nakhchivan, Ganja, Zaqatala, and Lankaran have been renovated. Work is currently underway on the construction of a new terminal, runway, and four hangars at the Heydar Aliyev International Airport. In order for the aviation infrastructure to further enhance the transit potential of the region and to develop the country’s tourism industry, a process has been started to upgrade the national air fleet. Plans have also been put in place to declare the country’s international airports free economic zones.

With regards to the imminent completion of the Baku-Tbilisi-Kars (BTK) railway, what impact does the Ministry hope to see from increased regional integration?

The joint venture of the BTK railway project by Azerbaijan, Georgia, and Turkey has begun and is currently in full swing. The construction of a 101-kilometer section required to connect the Trans-Europe and Trans-Asia railway networks to the South Caucasus railway system will enable cargo and passenger transportation from China through Central Asia and from the South Caucasus to the EU. The full operational capacity of the transport corridors passing through Azerbaijan will necessitate joining the convention concerning international carriage by rail and becoming a member of its intergovernmental organization. As a link enhancing the importance of the Transport Corridor Europe-Caucasus-Asia (TRACECA), the BTK railway project will also expand the transit potential of regional countries, accelerate the process of integration into the EU, facilitate cooperation within the framework of the European Neighborhood policy, and contribute to the development of Azerbaijan’s foreign economic relations.

“In order to improve the quality of the taxi service in Baku, 543 London taxis and other cabs have been purchased.”

What is being done to improve the quality and efficiency of public transport, both in Baku and in the provinces?

What challenges does Azerbaijan face in becoming a regional transport hub, and how is the Ministry addressing these?

The fact that the TRACECA and North-South international transport corridors converge on Azerbaijan has led to the emergence of an important transport hub in Eurasia and has required the creation of necessary transport infrastructure. Some of the most important infrastructure projects we have undertaken include the reconstruction of a highway and a railway line from Baku to the Georgian border on the basis of the latest technology in order to accelerate the speed of traffic and improve road safety, the construction of a new international seaport and creation of an international logistical center in the Alat settlement where both corridors converge, the purchase of new ferries with a capacity of 52 railway carriages in order to eliminate any physical barriers, the simplification of border clearance procedures through the introduction of a “one-window” principle, and the commissioning of six international airports throughout the country.

More than $140 million of the state budget has been allocated to the Ministry for 2013. What are some of the main projects that will be funded by this?

In general, the funds allocated from the state budget and other specific funds finance the construction and maintenance of motor roads, junctions, tunnels, pedestrian subways and other facilities, the implementation of various road transport projects including maintenance and repair, and the reconstruction of roads that are on the Ministry’s balance sheet. Large-scale projects are mainly implemented with loans and financial support from international financial institutions.

What is the long-term vision of the Ministry?

The proposals on future development directions with a view to resolving some of the outstanding problems with the organization of passenger and cargo transport and ensuring better coordination among various transport agencies in international transportation are as follows: to establish educational institutions to train qualified drivers in line with international standards; supply institutions with the necessary equipment and develop modern training programs; to optimize the bus service within district areas and between villages; and to continue work on the construction of new bus stations and the reconstruction of existing ones. In order to eliminate traffic congestion in the main cities of the Republic (Baku, Ganja, and Sumgait), we need to identify areas suitable for car parks at the entrance to the cities and elsewhere, to expand radial streets and avenues and build new radial roads in the newly reconstructed parts of the city, to introduce a light high-speed railway service, to apply new technology in order to ensure the transparent operation of the transport sector, to build alternative high-speed and fee-based roads along the North-South and East-West international transport corridors, to build a new highway linking Guba and Shamakhi districts, and to continue work on replacing the sand and gravel roads in the Republic with asphalt-concrete roads.