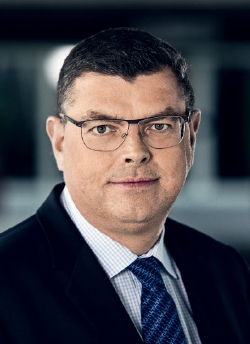 Share on:
Denmark has a long history trading with Lebanon. What are the pillars of this bilateral trade? Over the years, trade between our countries has grown dramatically. In 2013, Danish exports […]

Denmark has a long history trading with Lebanon. What are the pillars of this bilateral trade?

Over the years, trade between our countries has grown dramatically. In 2013, Danish exports to Lebanon reached a value of almost $150 million. Pharmaceuticals and sea transport services account for 40% of Danish exports to Lebanon. Looking ahead, I see huge potential in the energy market—both conventional and renewable. Lebanon needs to invest in its energy infrastructure and to utilize its conventional as well as renewable energy resources. Denmark has a global brand and cutting-edge technology in this field. A Danish engineering company, BWSC, recently entered the Lebanese market and boosted Danish-Lebanese business cooperation by building two new major power plants worth $350 million. A world-leading Danish windmill producer is now looking to enter the market.

What are the key trade trends and potential areas of investment for Danish companies in Lebanon?

There are, of course, many interesting investment opportunities in Lebanon. It has an excellent, educated, skilled, and dynamic work force, as well as a good business environment—and the country has consumers interested in the solutions Danish companies can provide. Lebanon also serves as a bridge to the region. Investment in Lebanon is challenging, however, because of the political uncertainty. Still, even now in these uncertain times, investors are entering the market. As indicated by the equity market, there is growing confidence among Lebanese companies about the prospects for consumer demand. Also, the Lebanese economy has previously demonstrated the capacity to bounce back quickly after poor years. Still, Danish companies are looking for more improvements in terms of a more transparent and safe environment for their investments and business contracts.

Following Vestas being awarded the first contract to install turbines in Jordan, will it look to execute similar renewable energy projects in Lebanon?

I believe Lebanon has a great potential in renewable energy projects. Measurements by Vestas as well as the Wind Atlas of Lebanon from 2011 financed by the UN Development Group and UNDP clearly show this. Vestas has been through the technical prequalification process in Lebanon, and is committed, together with Lebanese stakeholders to develop a wind farm project in the country within a range of 60 MW connected to an existing grid in the Akkar area.

Denmark is the per capita highest aid donor in the world. How has this aid been distributed in the case of Lebanon and supporting it against the spillover effects of the Syrian conflict?

The Danish government is deeply concerned about the refugee crisis and its impact on neighboring countries, in particular Lebanon. We are aware of the heavy burden the Lebanese people and host communities are shouldering and remain committed to offer our support in the short as well the long term. The Danish government is one of the largest donors providing substantial funding to humanitarian appeals and international humanitarian agencies such as the UNHCR, UNICEF, and UNRWA in Lebanon. To date we have committed more than $119 million in humanitarian assistance to help the victims of the Syrian crisis.

How you do you intend to facilitate greater cooperation at the SME level between Lebanese and Danish companies?

We need to support SMEs in developing in the right direction and equipping them with tools that enable them to become export-oriented. This is so crucial because SMEs are the soul of our economies. A great deal of effort has been allocated by the Danish Trade Council to support Danish SMEs and explore foreign markets, including Lebanon. In the framework of Denmark’s broader engagement with the regional “The Danish-Arab Partnership Program,” we have initiated a project allocating substantial funds to support SMEs in the Arab countries. Lebanon is a key partner in this framework.