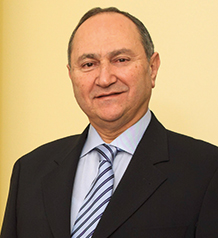 Maher Beydoun is a Lebanese national with a bachelor’s degree in economics from the University of Texas and an MBA from Southern Methodist University. He has held the position of Vice Chairman of Solidere Board of Directors since May 1994. Beydoun is partner and manager of various commercial companies in Lebanon and abroad. Also, he is a member of various professional committees, such the American Lebanese Chamber of Commerce.

Share on:
TBY talks to Maher Beydoun, Vice Chairman of Solidere, on the international developer's major projects in Lebanon and the region, and the ripple effects of Solidere throughout several sectors of Lebanon's economy beyond construction.

Solidere is simultaneously a land developer, real estate developer, property owner, property and services manager, and operator. On what main projects is the company currently working?

Currently in Beirut, we are completing the only department store by Solidere. Renowned architect, the late Zaha Hadid, designed this project, and it should be completed in 18 months’ time. We also started the Eastern Marina project that will be adjacent to the Port of Beirut and will have the capacity for about 200 boats as well as surrounding shops and restaurants. We are also about to complete the infrastructure of the new Beirut Waterfront Area. All of the streets are finished, which includes more work than meets the eye. Under the streets run sewage, rainwater pipes, and fiber optics. Even more, there are no electric wires or phone lines in the air because we have placed everything underground, meaning more than just the streets are finished at this stage.

Solidere International is doing quite well. We have just completed a major residential project in Riyadh. This project has 600 villas that are all for rent. Our policy for Solidere Beirut and Solidere International is to create rental income. This way, we will depend less on the sale of land. In Jeddah, we have a tower project that is almost completed, as well as another residential project. At present, we have projects in Ajman, in the UAE, as well. The first stage has finished, which comprises the golf course designed by Jack Nicklaus, which opened recently. The surrounding villas—44 of them in total—are completed, while one of the two hotels just opened recently.

With 23 years building Lebanon, how has Solidere contributed to the socioeconomic development of the country?

I cannot name every single thing we have done, but one standout is the development of first-class shopping malls. There is Beirut Souks, which has attracted international brands that would have never come to Beirut had Solidere not been here. Louis Vuitton and Chanel are some of the major names. While Solidere always contracts out our projects and it is difficult to say how many employees we have, we are creating jobs and giving opportunities, not just for workers but also architects, engineers, mechanical engineers, and more. For example, the contractor for the new marina likely employs a high number of engineers and workers, the same for the contractor for the department store or the contractor for the infrastructure projects. There is a French saying that where construction goes, everything follows, or when construction works, everything works. This includes carpenters, steel traders, cement traders, and workers. The construction sector is an important element of any economy.

What would be your main goals and priorities for this year?

We want to continue with our work. We hope Arab tourists will return to Lebanon because they are a major driving force of the Lebanese economy. Unfortunately, in the last few years they have not been coming. Now, however, we hope this summer will be a great one. We also hope to see the Lebanese diaspora return for extended visits. This is important for the tourism sector in Lebanon, which is a key sector as around 23% of our GDP is from the tourism industry. Lately, tourism has been down, which is why the economy has been suffering. Tourism makes things move as tourists spend money when they come here, and Solidere’s redevelopment projects are a major driver of tourism, enticing tourists to come enjoy everything Beirut has to offer.