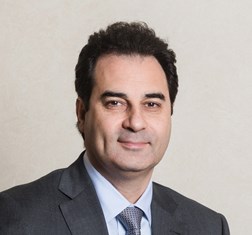 Rani Karimeh is the Deputy General Manager and Group CFO of Solidere. He has a proven executive management track record and over 25 years of experience. Prior to joining Solidere in the beginning of 2017, Karimeh served as Chief Financial Officer for Solidere International PLC. Previously, he spent almost 10 years in External Auditing at Arthur Andersen and as a Senior Manager at Ernst & Young, holding a portfolio of diverse industries. He served as well at Novartis Oncology as Regional Finance Manager/ BPA for the Middle East region. He holds a CPA from University of Illinois in Chicago and a master’s and bachelor’s from Lebanese American University.

Share on:
Solidere started with a mission to rebuild central Beirut after the civil war. Since then, the company has become a force in the Lebanese construction sector.

What is the mission of Solidere?

Solidere was established in 1994 by former President Hariri in the aftermath of the civil war, with the aim of reconstructing Beirut and, more specifically, the damaged areas in the Central District. According to the original master plan, the company would only operate for 25 years, though its lifespan was recently extended by 10 years to complete construction work. A public-private partnership (PPP) was set up to undertake the effort and secure the necessary financing for the project. Solidere was initially capitalized at USD1.82 billion. Following the retirement of some shares representing recuperated properties in 1997, its share capital, which is listed on the Beirut Stock Exchange (BSE), now stands at USD1.65 billion. The main objective behind Solidere was to change war-related perceptions about the city. For many years, the central district had been the symbol of war, and reconstruction was to signify the end of the war. The complementary objective was to reposition Beirut as the regional player it was before the war, giving it a new fresh look while maintaining its roots and wealth of archaeological assets.

What have been the country’s biggest successes?

Our biggest success has been the union between tradition and modernity and the way we balanced the need to preserve and celebrate the past with the requirements and amenities of modern times. Recognizing the city’s heritage, Solidere preserved surviving buildings—many dating from the Ottoman or French eras—and re-established the urban fabric and neighborhood structures. In the master plan, 265 buildings and 27 public or religious buildings were retained for preservation. These were carefully restored based on historical research on original designs and materials. Much of the renewal within the Old City is in full development, calling for modest contextual architecture framing public space and recovering city quarters. High-rise buildings are introduced in the city center in select locations in a manner that complements existing buildings. Interiors are fitted with modern equipment for functionality, comfort, and efficiency. The final product has confirmed that heritage buildings can survive and even create great value, provided they are adapted to the needs of contemporary life and business. An example of this connubial is Beirut Souks, whose reconstruction is Solidere’s most ambitious real estate development to date and one of its biggest successes.

Given the low purchasing powers of Lebanese at the moment, does the diaspora represent your ideal target?

The diaspora is indeed one of the most important investors in real estate and our main potential target. Lebanon’s economy in general has always relied on inflows from expatriates in the GCC and Africa, though these have become more important in light of falling investments from the GCC, which 10 years ago represented the backbone of the real estate sector. The diaspora holds strong ties with the home country and will, therefore, have continued interest in buying or renting property. However, we can count on their contribution only if investment conditions are facilitated in terms of banking facilities, interest rates, laws, taxes, incentives, and loans. This requires a joint effort from the government, the banking sector, investors, and developers. From the perspective of developers, it is important that we adapt our offering to market changes. This means offering smaller units, lease-to-own options, and lower prices in order to meet market demand and stimulate the market. Despite the crisis, most developers insist on offering large apartments that few can afford, holding on to the Lebanese real estate model of 10 years ago. By end of 2018, Solidere embraced an exceptional and temporary change in direction to adapt to the challenging market conditions in order to improve the company’s liquidity and substantially reduce debt. In contrast to 2018, 2019 holds interesting prospects for us following the decision to offer attractive prices in the market. We will close 1H2019 with USD200 million in sales. Moreover, we are positive about the 2019 summer tourist season and the return of GCC citizens, which might represent a further boost to the sector and the general environment in the country.