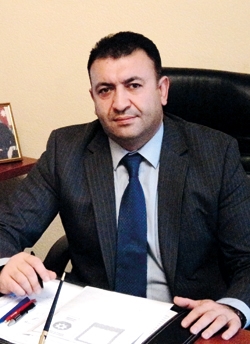 Kamran Nazarov was born in 1971 and graduated from the Azerbaijan State Polytechnic University as a Mechanical Engineer. He has considerable professional experience as an engineer, and in 2002 became Commercial Director at Lukoil Baku Trade House. From 2002 until 2003, he was General Director of Aznur, and he later joined Avestas as General Director. In 2004, he became General Manager of Baku Oil and Gas Systems. In 2007, he was appointed Director of the Foreign Economic Relations department at the Ganja Automobile Plant. He later became the Director of the Supply and Marketing Department. In 2008, he became the first Deputy Director for General Affairs, and has been the Director since 2011.

Since the Ganja Automobile Plant started production, what have been the facility’s major milestones?

The Ganja Automobile Plant started production in 2004 when an agreement with a plant manufacturing light cars in the Russian city of Naberezhnye Chelny was reached. We began by assembling VAZ-11113 Oka automobiles. It is very gratifying that most of these cars were distributed to those who are disabled as a result of the Karabakh War and veterans of World War II. Ganja Automobile Plant then signed an agreement with Russia’s UAZ OJSC, and in May 2005 our plant launched the assembly of about 10 UAZ models. Moreover, our plant signed an agreement with China’s Chang’an Automobile Group to assemble seven medium-duty automobile models, three of which were named “Ganja,” marking the first use of our brand. The official visit of President Ilham Aliyev to the Republic of Belarus in 2006 began a new chapter in the history of our enterprise. According to an agreement reached between the Presidents of Azerbaijan and Belarus, the Ganja Automobile Plant, the Minsk Automobile Plant, and Minsk Tractor Works signed an agreement. Shortly afterward, a new process line was installed by specialists at the plant. Thus, the first Belarus-brand tractor was manufactured on March 27, 2007. One month later, we began building MAZ vehicles. As a result of the talks held during President Ilham Aliyev’s visit to Belarus, the Ganja Automobile Plant Production Association, the Minsk Automobile Plant, and Minsk Tractor Works have continued cooperating. As part of this cooperation, our plant assembles various heavy-duty MAZ trucks and Belarus tractors. Since 2007, up to 4,000 Belarus tractors and 2,000 MAZ trucks have been manufactured at Ganja as a result of this partnership. These vehicles are currently used in various regions of Azerbaijan.

What other projects has Ganja Automobile Plant initiated?

Having adopted the motto “Step by step from smaller to bigger goals,” our enterprise is now working on new projects and initiatives. For instance, a trilateral protocol on cooperation was signed with Germany’s Haller and the Minsk Automobile Plant in March 2010 for the installation of Haller municipal service equipment designed for the chassis of MAZ automobiles. The Ganja Automobile Plant, the Minsk Automobile Plant, and Haller have reached an agreement for the assembly of 21-cubic-meter, modern equipment based on MAZ-6312A8 Euro-4 and Euro-5 chassis styles, which are adapted for conditions in Azerbaijan. To this end, an assembly workshop covering an area of 7,000 sqm and fitted with state-of-the-art process equipment, including a paint room, was set up at our enterprise. As planned, in June 2011 Ganja Automobile began the assembly of Haller municipal equipment. A total of 24 vehicles have been assembled to date, while 16 more are in the final stages of assembly. This is not all we do. Since 2010, our partnership with Belarusian companies BelAgroMash and DorElektroMash has been expanding. As a result, the Ganja Automobile Plant started manufacturing various suspended and trailing equipment for Belarus tractors. Our plant has manufactured a total of more than 300 crane trucks, municipal service vehicles, excavators, plows, and other agricultural machinery since October 2010.

What level of recognition has this cooperation between Azerbaijani and Belarusian auto makers received?

It is no coincidence that during their visits to Azerbaijan, the Prime Minister of Belarus, Mikhail Masnikovich, and the First Deputy Prime Minister and Co-Chairman of the Belarus-Azerbaijan intergovernmental commission on trade and economic cooperation, Vladimir Semashko, praised the work and projects carried out by the Ganja Automobile Plant. However, the best feedback of our work was given by President Ilham Aliyev during a cabinet meeting in August 2008 dedicated to the results of the country’s socioeconomic development in the first six months of that year. On the topic of agricultural achievements, our Head of State said, “we have attached special importance to agricultural development in the last few years. We have taken practical measures and purchased equipment and machinery. There are no problems with the supply of machinery now and everything is available. We have actually started the production of agricultural machinery in Azerbaijan.” Additionally, the Ganja Automobile Plant Production Association established a marketing and maintenance enterprise in Baku in April 2011, which deals with the sale and maintenance of the machinery manufactured by the plant. All the machinery manufactured by the Ganja Automobile Plant has a one-year warranty period, with effective and qualified after-sales service and maintenance organized in all regions of Azerbaijan. Our service centers also have mobile maintenance teams. The Ganja Automobile Plant is currently carrying out talks with Belarusian company Amkodor on the potential assembly of its products in Azerbaijan. We are also examining the prospects for the assembly of MAZ city and intercity buses in Ganja.

What is your target market and how is business divided between cars, buses, and agricultural vehicles?

Our main focus at the moment is to supply the domestic market with our vehicles. There is a great demand for heavy-duty trucks, tractors fitted with different equipment, specialized agricultural machinery, and municipal service and construction hardware in Azerbaijan. Of course, we are also working on ways to access foreign markets and sell our machinery outside of Azerbaijan. This is the objective of our marketing and maintenance enterprise. We regularly monitor the markets of neighboring countries and plan on setting up permanent representative offices in these countries.

What have been the most significant changes to Azerbaijan’s business landscape over the past few years?

The development of business in any country boils down to the political and economic situation. Countries considered stable from political and economic points of view always attract investors. This process started in Azerbaijan back when national leader Heydar Aliyev returned to power. The signing of the “Contract of the Century” is a graphic example of that. In continuation of this work, President Ilham Aliyev has done a great deal to create a favorable business environment in Azerbaijan. Today, hundreds of foreign companies operate and invest in Azerbaijan, working alongside local business people on further developing the national economy and improving the wellbeing of the country’s population. It is therefore no coincidence that in remarks at a meeting of the Cabinet of Ministers on the results of socioeconomic development in 1H2012 and future objectives, President Ilham Aliyev said, “Foreign investors have confidence in us. We have created wonderful conditions for foreign investors. The relationships between government officials and major companies are very positive. Foreign investors help us increase local production.” Thus, Azerbaijan is ahead of most countries in terms of its business landscape. Suffice to say that the World Bank’s 2013 Doing Business report ranks Azerbaijan 67th among 185 countries of the world in terms of its business environment. Azerbaijan is among the world leaders according to a number of indicators. All of this is clear evidence of the favorable conditions created by President Ilham Aliyev for the development of business.

Looking forward to 2013, what are the main growth objectives for the Ganja Automobile Plant?

In continuation of our ongoing projects, in 2013 we will carry on assembling various models of tractors and vehicles in accordance with our agreements. The assembly of other specialized vehicles is also expected. In addition, we plan to assemble vehicles for road construction, municipal service, snow removal, airfields, forestry, and the agricultural sector under the agreement with Amkodor Holding. The assembly of Haller municipal service vehicles for the MAZ chassis will also be continued in 2013. Furthermore, we plan to start the assembly of modern and comfortable MAZ-brand city and intercity buses. As far as the markets are concerned, our main goal is to find customers for our automobiles and tractors in Georgia, Turkey, and Central Asia.