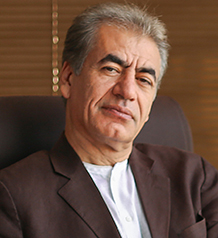 Dr. Ahmad Reza Nikkar is the CEO and Board Member of Atiyeh Saba Investment Company, affiliated with the Civil Servants Pension Fund. Prior to his current role, Dr. Nikkar held different positions in the Ministry of Industry, Mining, and Trade, also being the Executive Manager of the high-speed train between Tehran and Esfahan, as well as in the Ministry of Health and Medical Education. He holds a bachelor’s degree in civil engineering, a M.S. Industrial, a Ph.D. in curriculum and planning from Texas University, and a post-doctorate in planning and management from Harvard University.

Share on:
TBY talks to Dr. Ahmad Reza Nikkar, CEO of Atiyeh Saba Investment Co., on new access after sanctions, preparing for the development of the tourism industry, and plans for the year ahead.

How does the lifting of sanctions represent a turning point for Atiyeh Saba’s mission of giving local companies access to global markets?

The lifting of sanctions means Iran will open up to the world after 20 years. Iranians are well known for their hospitality, but the removal of sanctions will grant the country the opportunity to show it to the world. When I took office, the sanctions were in the last process of removal. Since then, we organized a conference in Isfahan where we invited top officials involved in the hospitality sector, such as Kempinski, Rotana, Ritz Carlton, and the École hí´telií¨re de Lausanne. We wanted to show that we are ready to deal with the world, and we received a great response; so far, we have defined USD10 billion in projects with foreign investors. In order to be ready for the arrival of more visitors to Iran, we need to renovate the hospitality sector, as most of the hotels were built 45 years ago. This has become a major project for Atiyeh Saba, as we plan to build at least 50 five-star hotels.

What investments are you conducting to prepare the required transport infrastructure for the development of tourism?

Iran has about 250 aircraft in total, and Aseman Airlines is one of the leading airline in the country with strong roots even before the revolution. During the war and sanctions period, many of our aircraft were damaged, and we are currently renovating them. During the president’s visit to France, we signed a MoU with Airbus, and 50 aircraft were assigned to Aseman. At the same time, we have to expand our airports and railroads. We started investing in a high-speed railroad from Tehran to Isfahan and have signed an MoU with Italy’s ENZO Group to develop the Tehran-Mashhad railroad project, valued at USD5.5 million. Overall, we have signed USD8 billion in contracts with ENZO. Moreover, because of the pollution in Iran, we have signed a contract to purchase 14,000 hybrid cars to transport visitors throughout the country. We will send instructors to mosques and the five international airports to train drivers to improve their English. Besides our investments in transport, we are defining different attractions for the tourism industry.

How are you attracting new technologies to the mining industry to develop the sector?

Mining was not part of our activities before, but since I joined Atiyeh Saba we have set up a holding for the mining sector. We now hold multiple meetings with foreign companies that are interested in supporting projects financially. Mining projects take a long time in production, so it is not easy to find investors who want to wait five to seven years to make a profit. We aim to invest in different materials such as copper or in areas like Chadormalu.

What are your plans for the year ahead?

We want to show the world who we are and what we can do. We aim to share our projects with the world, and the best location to focus on first is the UAE. We organized an exhibition in Dubai to introduce ourselves to the world’s biggest companies and show off our capabilities. Furthermore, we are developing the Melli National Shoe, a brand that has 240 stores throughout the world. We signed a contract with the Polytechnic University of Turin to redesign the shoe. The demands of young people have changed, so we have to make them believe this is what they need. We bring in the best expertise to all these projects. The country now needs to focus on creative ideas that create assets, not just invest. Thinking will bring about many assets for the development of Iran.