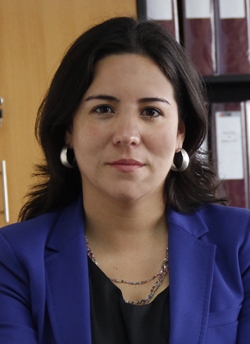 President, the Innovation for Competitiveness Project

Sandra Doig Diaz is a Lawyer from the Pontificia Universidad Catolica of Peru. She also holds a Master’s degree in Public Policy from the University College London in the UK, and a second Master’s degree in International Cooperation and Project Management from the Instituto Universitario Ortega y Gasset in Spain. She has over 10 years of experience in public administration and occupied a number of positions and is currently Vice-Minister of MSE and Industry and President of the Innovation for Competitiveness Project at FINCyT.

Share on:
"In July 2014, the National Plan for Productive Diversification was approved."

What actions have been implemented to spread the culture of research and innovation among society?

The current government has put a special emphasis on the promotion of science, technology, and innovation (STI), not only by increasing existing funds, but also through the implementation of new funds for R&D, STI, and innovation and innovative entrepreneurship. In all, the resources allocated to these funds add up to over $360 million, and several public entities are involved in their implementation and execution. Also, in a complementary effort, this government has focused on strengthening human capital through important scholarship programs for higher education and technical training.

What role does innovation and science play in the country’sgrowth strategy?

In July 2014, the National Plan for Productive Diversification was approved. The Plan aims to create new engines for sustainable economic growth, leading to productive diversification and sophistication and the increase of productivity. Innovation is a key element of the Plan, which recognizes that without innovation it is not possible to diversify and grow. This is a lesson learned from the experience of more developed countries, where innovation explains much of their medium-term sustainable growth. The Plan proposes activities and actions that aim at improving and strengthening the innovation and entrepreneurial eco-system. In line with the Plan, our country’s innovation strategy has two main objectives; to incorporate innovation in firms’ business and competitive strategies, and to increase the number of firms with the capacity to innovate in the future. The first objective is addressed through innovation funds, and the second through technological innovation centers, which will contribute to reducing the productivity gaps of SMEs through technology diffusion, which involves the dissemination of technical information and know-how and providing technical assistance for the subsequent adoption of new technologies and techniques.

“In July 2014, the National Plan for Productive Diversification was approved.”

How have research and innovation funds evolved over time?

The Innovation for Competitiveness Project (FINCyT) was established in 2007 through a loan agreement between the Government of Peru (GOP) and the Inter-American Development Bank (IADB). The fund received an allocation of $36 million, with $25 million from IADB and $11 million from the GOP. That was the first step we took in Peru to finance STI activities. In 2009, the government established the Fund of Research and Development for Competitiveness (FIDECOM) with almost $70 million to finance innovation projects in SMEs. In 2012, FINCyT was increased from $36 million to $100 million ($35 million from IADB and $65 million from the GOP), including funding lines for innovation and innovative entrepreneurship. In this manner, the Peruvian government confirmed its solid commitment to promoting innovation, including technological innovation. With the new funding, in 2013 several funding lines were implemented: start-ups, incubators, disruptive innovation, technology transfer for SMEs, and sectoral agendas, among others. In all, today there is funding from the Peruvian government of up to $360 million for science, technology, and innovation funding lines, of which $151 million are assigned to innovation funds, which are brought together under the Innovation for Competitiveness and Productivity Program, established by the Ministry of Production in 2014, in line with the objectives of the National Plan for Productive Development.

How does this innovation program contribute to the objective of improving and strengthening the innovation and entrepreneurial ecosystem?

The program has allowed us to focus on the national strategy set by the Plan, where all funds are aligned and complementary with each other. The instruments address different stages of innovation, such as the identification of gaps and of existing solutions, project development, prototyping, and validation and packaging. There are also funding lines for developing the quality system. In 2014, over $1.6 million has been assigned to 23 startups and four incubators; $0.4 million for the development of two sectoral agendas; and $0.7 million for the accreditation of 11 laboratories. There are also resources available for enterprises to develop and adopt technology that will allow them to increase productivity and, thus, competitiveness. Since the creation of FINCyT, 640 enterprises have benefitted from funding for over $45 million. This funding line provides incentives for enterprises to work jointly with universities or research institutes, by financing up to 70% of the cost of the project, while if the enterprise implements the project on its own, it receives financing for up to 50%.

Could you talk us through some of the successful projects supported by the innovation program in recent years?

In terms of commercial success, an outstanding case is that of an agro industrial company in Piura, which adapted several technologies from abroad and made its grape production much more efficient and able to yield at seasons in which the product is not available from regular providers worldwide. This project has attained a high commercial impact for the company, and returned to the government up to 12 times in taxes the amount invested by the public fund. It was estimated that in the 2013 to 2017 period, this project will have contributed almost $50 million to Peruvian GDP. In terms of entrepreneurship funding, there are several interesting startups being funded. For example, one is developing an electronic system with RFID technology to facilitate shopping and item detection in the retail industry. Another startup is implementing a web-based platform to design and execute learning programs from semantic searching; this startup has been recognized by MIT and Stanford universities in startup competitions. Other interesting cases include a startup working with modular computer numerical control (CNC) machines for the textile industry, and another working with health food vending machines. In terms of innovative merit, there is a successful project related to seaweed in Arequipa; a new farming area has been developed, where the company extracts certain properties of the algae for commercial purposes. The product obtained is high in proteins and is exported to Chile, where it is widely consumed. There is also a joint poultry project between the company San Fernando and Cayetano Heredia University, in which waste from poultry is utilized to produce fertilizer and organic antibiotics.

What are your main goals for the future?

We are working toward identifying which sectors of the Peruvian economy have the greatest potential for growth, or could be considered potential economic drivers, and which could lead our country to sustainable economic growth. This will allow the government to focus and align innovative efforts from diverse actors, both private and public. In this way, these sectors should become the engines that lead the Peruvian economy to growth in the medium term. The results of our current innovation funds show that for every $1 invested in an innovative project, there is a return of $7, through the generation of employment or taxes. Our main task will be to consolidate and strengthen the innovation program, making sure the necessary resources are available, and designing and adjusting instruments to provide reimbursable and non-reimbursable funding that will allow innovations to reach the market. Also, special attention will be given to strengthening the innovation eco-system, to raising awareness, and to building the capacity of all actors involved in the innovation system so that they may use the tools that are made available through the innovation program, thus increasing public and private investment in innovation.