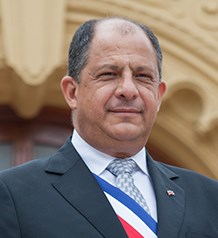 Luí­s Guillermo Solí­s Rivera has been President of Costa since 2014. Previously, he worked as a foreign ministry official from 1986 to 1990, and played a key role in drafting a Central American peace plan brokered by Costa Rica’s former President Oscar Arias Sanchez. He has also served in delegations to the UN, the Organization of American States, and the EU.

Share on:
"The investment numbers have been steadily climbing in Costa Rica at a rate of around 14% per year."

The forecast for Costa Rica’s growth in 2016 is around 4.2%. What are the country’s main economic drivers?

Our estimation is for growth is 4.2% and it could be a little higher, as we have had five consecutive months around 5% growth, which is an encouraging sign. Most of the driving force has to do with tourism, which has grown very strongly, as well as investments in medical devices and exports in that field, which have been significant. Costa Rica has also received important investments in services, including those in back offices supporting businesses from here, which has also been a substantial difference compared to other years. In the agricultural sector, we just received good news regarding the banana segment, which has exceeded all expectations. If the weather continues as it has been this year, as opposed to the bad weather last year, we will go over all the statistics since 2007, which means that we could be at the height of the biggest banana exports that the country has had in many years. That is also on the rise, therefore I am quite optimistic that the performance will be either as it currently is or better.

FDI in Costa Rica increased to USD2.8 billion in 2015. What is your outlook for 2016, and what are you doing to increase this figure?

The investment numbers have been steadily climbing in Costa Rica at a rate of around 14% per year, and that has been the case for the last two or three years. This is important because it indicating that the strategy we are pursuing is successful; we are promoting seriously the investments even with the President as one of its actors. I travel and meet with many other leaders; we go to Silicon Valley, New York, Chicago, and cities in Europe where we meet with people, which provides the necessary energy that culminates in more reposed and strategically orientated work that our investment promotion industry, CINDE, develops, as well as the work that Procomer, our export promotion agency, develops. Word-of-mouth reference accounts for about 50% of all investments that we receive in Costa Rica, which have been here for a long time. It is an action they have repeated through the years because they are happy with the system, and so one of the things we do all the time is invite those interested in working in and investing in Costa Rica to come and talk with people who are already working here. This has been phenomenal because they hear from other businessmen and women what they are doing and what the conditions of the country are.

Are there any particular countries or regions from which you are trying to increase foreign investment?

We are looking at the whole world. Costa Rica is one of the most open economies in the world, with access through FTAs or relations to 2.5 billion people, which is a significant number. We do this on a general and a global basis because of the geographical closeness and because of our traditional linkages in the past, whereby most of our investments came from the US and Western Europe. However, we have seen other strategically important investments coming from China, Korea, and Australia. Our overall strategy remains broadly focused.

What aspects of Costa Rica make it an attractive destination for investment?

We have been investing in public education for over 150 years. Costa Rica had its first public girls’ school 10 years before we became a republic, so this is an ongoing priority that we have kept strongly. We believe deeply in forming our citizens, and it shows. After so many years, we have developed a number of qualities in the workforce that are extraordinary. We are close to the timelines in the US and closer to Europe than India or China, and this facilitates business connections. The second thing is connectivity and we have dozens of air connections to Europe and the US every day, which is particularly important for certain industries. We currently have four direct flights from Madrid, Zurich, Paris and London. Another factor is that there is a business culture in Costa Rica that is easy to link with the practices of elsewhere, not only in terms of procedures, but also language proficiency in English or French. There is an accumulated experience that has also created an attractive incentive regime. This has been an ongoing process for over 30 years now, and we have been able to negotiate FTAs with over 12 nations or blocs of nations. The fact that we have access to these markets further adds to an already attractive situation. Then, there are other business aspects, such as Costa Rica’s political stability. This is a country with a strong judiciary; we have one of the lowest crime rates in Latin America. This is a small country, but it is livable. The cost of living is higher than in other places because, among other reasons, of our social regimes, and social security in particular. Costa Rica is a country that many like because of its nature and the fact that we have almost 100% renewable energy. All of these are parts of a country persona that makes Costa Rica an attractive spot to invest in.

What is being done on to address the fiscal deficit, and what is the significance of the reform in the accession of Costa Rica to the Pacific Alliance and the OECD?

We defined since the political campaign that this would be the core issue of our administration. The fiscal deficit went from 2% to 6% in less than a decade, and 15 years later we are defining a small reform that would increase VAT by 2%. We have divided into nine bills the different reforms for income and expenditures, four of which have already been approved and two are about to be voted on by the legislative assembly. We have not yet discussed the two big income projects, which are the transformation of the sales tax and income tax, which at 13% is ridiculous compared to the services that Costa Rica seeks. We want high-standard services but do not want to pay for them—good democracies are not cheap. This negatively affects our accession to the Pacific Alliance and the OECD because if we do not have the financial sustainability that Costa Rica requires, we cannot make the most of the advantages an FTA has to offer, nor can we compensate for the negative effects that these agreements can have upon certain sectors of the economy, particularly agriculture. Our unemployment rate is around 9%, and if we are not careful this could escalate. I would not want to imagine Costa Rica collapsing because the fiscal deficit accompanied by a high external debt put us in an impossible situation. We need that reform to be successful.

How is the accession to the OECD progressing, and do you see this happening by the end of your mandate?

I hope so, as I have seen it progressing well thus far. In a general sense, the organization is happy, advances have been significant, and there are areas in which Costa Rica is far beyond what would be expected from a country of our size with an economy as relatively vulnerable as ours. In clean energies, for example, we exceed OECD.

Public infrastructure is one of the key elements holding back Costa Rica’s competitiveness. How are PPPs contributing to the development of the sector?

We are starting the PPP process. The experience has been short and in some cases unpleasant. Concessions that the government has made have been negative because the opacity and lack of transparency in airport and road projects generated many doubts regarding the convenience of advancing further. PPPs remain the way forward into the future.

2015 ended with a poverty rate of 23%. What have been the most successful initiatives, and what else is being done to reduce this figure?

The most important initiative is “Puente al Desarrollo,” which looks at taking 57,800 families out of extreme poverty. At the moment, we have around 28,000 families incorporated into social processes after guaranteeing they are the ones that truly require government support. We are on the second stage of recruiting the remaining 28,000 families. This exercise addresses social inclusion by incorporating these families into formation processes, employment, technical training, and overall improvements in living conditions.

What are your priorities in the region?

Central America and the Caribbean is a natural area for us to relate to well. I like to think of the immediate region as almost an extension of our local markets, as it is an area in which we compete particularly favorably. Obviously, the US and Europe are significant markets; over 50% of what we import and export comes from and goes to the US. We are probably the largest partner of the EU in Central America, which is significant in terms of our exports as well. We are also active with Latin America beyond the greater Caribbean area. Our relations with Chile and Peru are significant, and the likelihood of an agreement between Costa Rica and the Pacific Alliance is still there, though this is a decision that will have to be made after we solve the most significant economic problem we have today, which is the deficit. Again, we are interested in pursuing trade relations with Asia. We have an FTA with China, which is significant. We are interested and have a longstanding relationship with Japan, but the closer circles of investment are priorities because of the importance they have in our overall matrix.