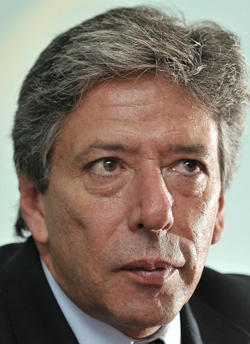 Born to be Free

Roberto Hinestrosa Rey studied law at the Universidad Externado de Colombia, and subsequently went on to complete graduate studies in private law, commercial operations, and comparative law at the Sorbonne, and finance at Sciences Po in Paris. He served as Vice-Minister for Justice from 1992 to 1994, in the government of Cudinamarca from 1999 to 2000, and was head of the cabinet of that region in 2008. He received the Colombian Order of Congress in 2006.

Share on:
"Social sciences and economics are solid subjects in Colombia, and are certainly a part of the tradition of our university."

Colombia is currently third in the QS Latin American University rankings, behind Brazil and Mexico, but ahead of Chile and Argentina. Could you evaluate the current state of Colombia’s university education system?

Colombia has a centuries-old tradition of education. However, while there are around 300 universities or institutions in Colombia, only 30 are accredited by the Ministry of Education, and of those 30 only 10 have been accredited for just under a decade. The Universidad Externado de Colombia was founded in 1886 as the first non-religious university in the country. It was founded in retaliation to absolutism and the suppression of the freedom of education imposed by the dictatorship of the “La Regeneración.” Our university was born following the various civil wars that were fought in the country between 1860 and 1885. The causes of the Colombian Civil War of 1876, also known as the War of the Schools, dated back to approximately 1870 when members of the Colombian Liberal Party attempted to introduce public education to the Colombian states, while the Colombian Conservative Party advocated placing education solely under the aegis of the Roman Catholic church. The university was therefore born out of rebellion. This institution has a liberal tradition of free expression, one which we have been proud of for the past 128 years.

Which subjects receive the best treatment in Colombian education?

Social sciences and economics are solid subjects in Colombia, and are certainly a part of the tradition of our university. Colombia also has a pedigree in subjects such as politics, art, philosophy, and psychology, in addition to having impressive medical departments. Engineering schools are strong too, particularly for courses related to mining. Meanwhile, although in actuality infrastructure in Colombia is short of what it could be, the study of design and engineering is solid. There is extensive research into biodiversity as well, as a result of the country’s naturally diverse environment.

“Social sciences and economics are solid subjects in Colombia, and are certainly a part of the tradition of our university.”

You founded the school of Finance, Government, and International Relations in 1986. How do you maintain the founding vision of this first interdisciplinary school for education in Colombia?

Actually, this was the first interdisciplinary school in Colombia. We first began to offer studies in different areas that were not available at other schools. We worked together with Sciences Po in Paris. I am a student of that institution, and we have enjoyed strong input from it, having gone on to build a degree program that could offer studies in finance and government. There is a difference between political science and government, and ours was the first school that groomed the professionals who would go on to govern the various institutions of Colombia and other nations, as opposed to just providing an education in political theory. We also offered studies in economy, business management, and international relations. It was the first school that gave professional studies in international relations. We also placed emphasis on languages, whereby our students would graduate with fluent English and French, and are thus prepared to study in English-speaking and French-speaking countries. This school effectively became a model for Colombia for providing the first undergraduate degree to develop professionals in finance and international relations, or government and international relations, as opposed to the more familiar lawyers, engineers, or economists.

What sort of demand is there for your graduates?

Our degrees are well received in both the private and public sectors. There is also high demand from other countries in Latin America, and we have students in Europe, Asia, Japan, and India. The demand for our graduates comes from a broad range of sectors, and this interdisciplinary focus allows people to develop their skills in different areas to practice working in different sectors. Our students, upon graduation, are prepared for a wide spectrum of professions.

Our research center “Centro de Investigaciones y Proyectos Especiales” (CIPE) enjoyed collaboration with Sciences Po, and in fact the university worked with Sciences Po even before this school was established. We first began exchanging students, and in the undergraduate program offer exchange programs that allow for the homologation of foreign higher education qualifications. In our undergraduate courses we offer joint degrees with universities such as Audencia Nantes École de Management, Rouen Business School, IESEG School of Management, the International University in Geneva, the Instituto de Estudios Bursátiles de Madrid, ESDEN Business School, and the University of Wollongong. The graduate course teachers come from Science Po, while those from New York’s Columbia University also teach the various graduate programs. With Columbia, which is ranked 14th in the QS World University Rankings for 2013, we have a double certification agreement. In particular, we work with Columbia University’s School of International and Public Affairs, which sends around 14 professors to our country every year. The exact agreement with Columbia University enables our students to study in Colombia for a year and go to New York for their second year of their Master’s degree after acceptance. In the English-speaking world, we are establishing links with the London School of Economics and working with Cambridge University and Oxford University, among others. We are also working with Irish and Scottish universities and expanding our programs in that region. In the US we are focusing on Californian universities such as UC Berkeley, UCSD, and UCLA. In addition, we are working with Georgetown University in Washington, DC. However, the main problem that students have with exchanges with American and British universities is cost. We are doing a good job in striking reciprocity agreements that mean that people coming from the UK and the US do not pay our fees, while our students are spared fees abroad. Naturally, we have agreements with important universities from Spain such as the Universidad Complutense de Madrid, Universidad Autónoma de Madrid, Universidad Carlos III de Madrid, and the Universidad de Salamanca. In France also, we have agreements with leading universities such as Pantheon-Sorbonne University, Panthéon-Assas University, Paris-Sorbonne University, and Paris Dauphine University. In addition, we have international agreements with universities in Germany and Finland.

How are you preparing your students for a world that increasingly demands people that are bilingual or trilingual? How do you ensure the quality of your language teaching?

We have a strong language school with a large staff body of native English-speaking teachers from the UK. We teach intensive courses for six hours a week over four months each semester, as our program is divided into two semesters. One begins in February and ends in June and the other one begins in August and ends in December. We have intensive courses of six hours a week in English and in French, with six levels available in English and four in French. We also provide courses in other languages such as German, Italian, Japanese, Arabic, Mandarin, and Portuguese.